Breaking with all precedent, Trump will apparently retain his private squad of loyal ex-cops in the White House 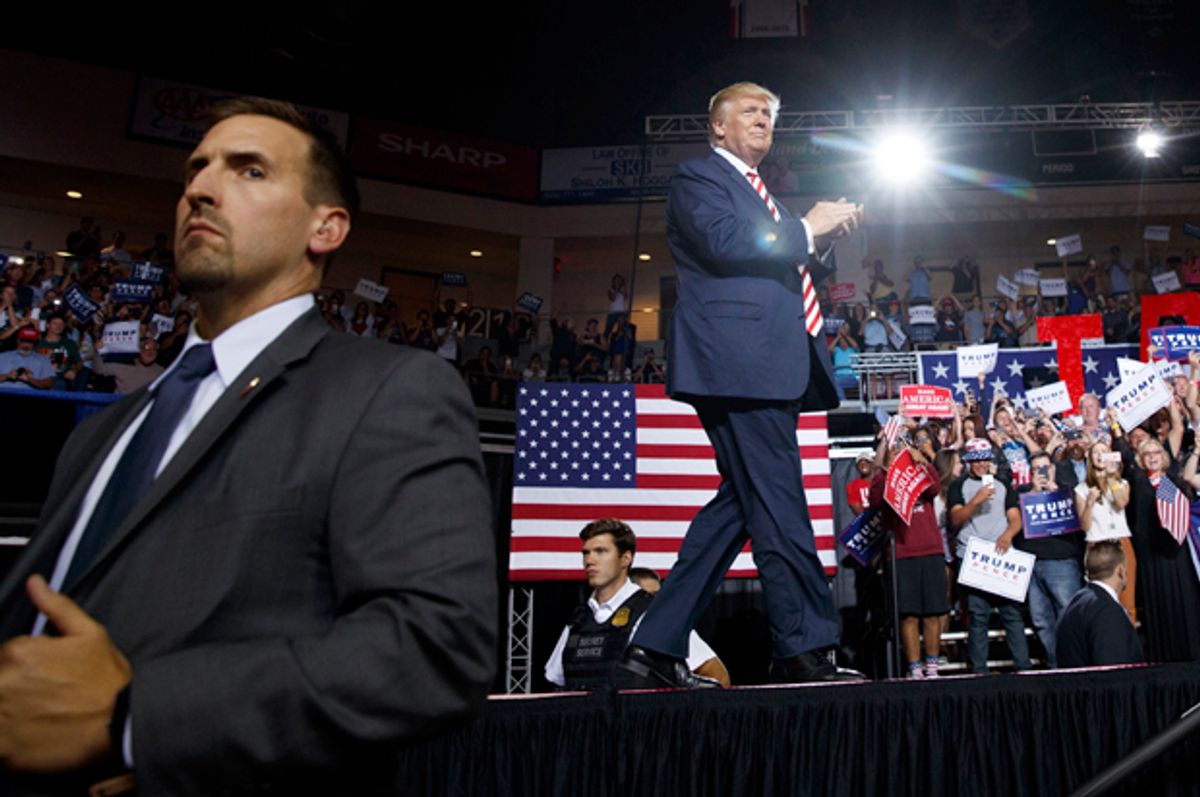 On Monday  Politico reported the startling fact that in addition to relying on his Secret Service protection, Donald Trump employs his own private security and intelligence service and plans to continue to do so as president. This is unprecedented. Presidents already have the most sophisticated protective shield of any human on Earth and none has ever employed his own security team before.

If the Politico article is correct, Trump's private security staffers have not been trained for this kind of work and may actually make Trump less safe than if they were not there at all. All this raises the question of why he insists on having them around.

It turns out that the main function of Trump's private security forces has been to deal with protesters at his rallies, which he has bizarrely continued to hold since the election and promises to continue to do so. This past weekend in Mobile, Alabama, he explained why:

They’re saying, "As president, he shouldn’t be doing rallies." But I think we should, right? We’ve done everything else the opposite. This is the way you get an honest word out.

As Robert Reich observed in Newsweek, this is one of the ways Trump disseminates propaganda (such as insisting that he won in a landslide). One can easily imagine him telling his crowds that the CIA is plotting against him or that authoritarian policies are necessary to fight whatever enemies he decides are keeping America from being great again.

Trump is appearing only before friendly crowds, with many people who have been to Trump rallies before and consider themselves part of his "movement." Rather than using the opportunity to wind down hostilities, as one might expect a new president with a very shaky mandate to do, he's winding them up.

This is where his private security force comes in. The specialty of these folks seems to be in bringing the hammer down on dissent. Where the Secret Service concentrates on keeping the president safe, these "special bodyguards" concentrate on protesters. Here's some footage from Trump's "Thank You Rally" in Michigan on Dec. 9, after he gave the signal to "get 'em out":

The head of Trump's private security force is a former cop named Keith Schiller. Like most of Trump's close associates, he's a full-blown conspiracy theorist. According to Politico, Schiller has tweeted that "20 percent of Clinton’s campaign cash came from people who were responsible for the September 2001 terrorist attacks, that a grand jury had been convened to investigate her use of a private email server for State Department business and that Obama encouraged undocumented immigrants to vote illegally." The tweets, hyperlinked here, Schiller shared just this fall.

Schiller has been with Trump for years and is so close to him that Trump asks for his advice and will be bringing him on board at the White House to serve as some kind of special counselor or security specialist. The rest of his security team is composed of former cops and FBI agents who are presumably being paid by Trump personally — although with the way things are going, he will probably find a way for someone else to foot the bill.

So what's the big deal? So far the Secret Service hasn't said anything, although former agents seem to believe this is a dangerous situation that could interfere with Trump's security. But what makes people nervous about this arrangement is the idea of a political leader having his own security guards and a growing group of fanatical followers who are being worked up and fed propaganda by the president — who happens to be a demagogue.

There are historical parallels that make people very uncomfortable. As Salon's Amanda Marcotte pointed out yesterday, we now have Trump supporters hurling the Nazi word "Lügenpresse" (German for “lying press”) at media representatives at rallies, with Newt Gingrich giving seminars on how to smooth out the rough edges of the fascist rhetoric so Americans can feel comfortable only believing what they're told by their leaders. This private security service and its function as a suppressor of dissent is reminiscent of that same Nazi period. Obviously, it's nothing like what the SS later became, but its origins are similar enough to make one feel nervous.

Trump has the support of many police officers around the country. He won the endorsement of the border patrol and unions representing U.S. Immigration and Customs Enforcement personnel as well as the National Fraternal Order of Police, which issued a "wish list" of dozens of proposals shortly after the election. The highlights of the fraternal order's list include lifting the ban on racial profiling put in place by the Bush administration, ending the Deferred Action for Childhood Arrivals and using the information obtained to deport everyone who signed up under it, allowing local and state police to participate in the deportation of immigrants and stopping implementation of a national database on police use of force, among other things.

The National Fraternal Order of Police is very supportive of Trump's "law and order" agenda. It's impossible to know how many individual police officers count themselves as members of the Trump movement, but some certainly do. That's their right, of course. But considering Trump's worldview, it's concerning.

As for the president-elect, he has been all over the map on many issues but he's been very consistent in saying one thing:

I'm afraid pretty much anything is thinkable right now.