Trump's bewildering, inconsistent statements are not accidents — they're part of a large and dangerous pattern 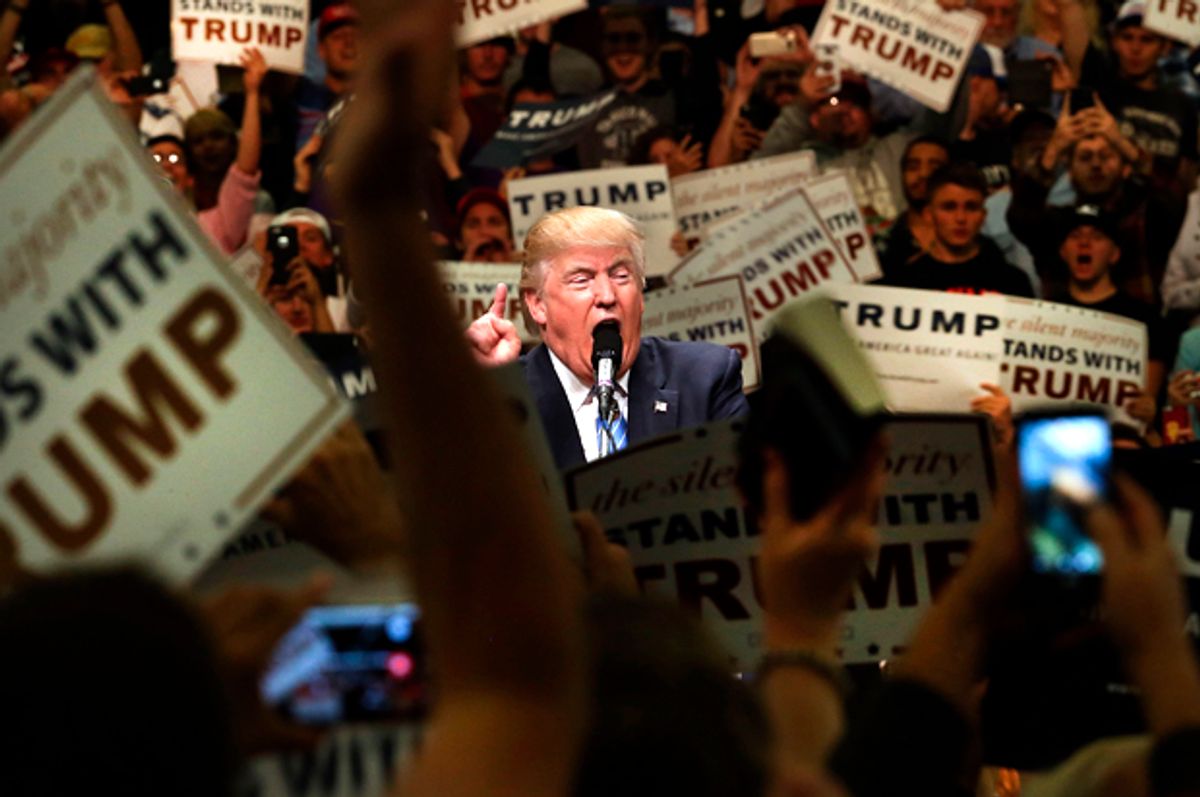 Donald Trump is the textbook example of a demagogue. He is a bully who pretends to relate to the “common man." He is bigoted, crude, grandiose, charismatic, egomaniacal and obsessed with personal loyalty and betrayal.

Because he is a demagogue, Donald Trump is expert at telling both the “big lie” and the “small lie.” The former amounts to a gross and obvious effort to bend reality to his will. The latter is more difficult to counter; Trump’s mountain of small lies (due to the sheer volume of them) overwhelms and exhausts those of us who believe in empirical reality.

Trump’s voters and other supporters contribute to his cult of personality. Out of fear, devotion, willful ignorance or some mix of the three, the Trumpthuglicans wrap themselves in his lies like a blanket, one that protects them from the harsh realities of their lives.

And Trump has taken a guiding principle of authoritarianism to heart: The victor will never be asked if he told the truth.

To wit: During a rally last Friday in Orlando, Donald Trump finally admitted the obvious:

You people were vicious, violent, screaming, "Where's the wall? We want the wall!" Screaming, "Prison! Lock her up!" I mean, you are going crazy. I mean, you were nasty and mean and vicious and you wanted to win, right? But now, you're cool and you're not nearly as vicious or violent, right? Because we won, right? You're basking in the glory of victory.

On the other hand, during Trump’s presidential campaign, he repeatedly denied that his supporters were violent and had physically attacked protesters and other people deemed the enemy.

Trump’s contradictory statements about violence are part of a much larger pattern. He also promised his supporters that he would “drain the swamp” of Washington lobbyists, financiers, bankers and other “special interests.” Instead, Trump has filled his Cabinet and other senior-level positions with people of this type — whose collective wealth is greater than 30 percent of the American people.

To the bloodthirsty howls of his supporters, Donald Trump promised to imprison Hillary Clinton and encouraged personal violence against her through “Second Amendment” remedies. Trump has now admitted that was all hyperbole and that Bill and Hillary Clinton are “good people.”

Trump also proposed building a huge wall to keep undocumented immigrants from entering the United States. His subsequent statements about this have been contradictory as well, but he now says such talk was metaphorical and that there will be “doors through the wall.”

Following the cowardly surrender of the Electoral College, on Jan. 20 Trump will become president of the United States. His lies paid great dividends during the presidential campaign. They were a potent weapon against Hillary Clinton and were one of the decisive factors in him winning the White House.

Trump’s lies also served to train the corporate news media as well as too many members of the American public to embrace his “post-truth” reality. To that end, Trump — borrowing from his idol and apparent sponsor Russian President Vladimir Putin — has created a state of perpetual disorientation and confusion among the mainstream news media and the public.

Whether through “fake news” (which is really black or gray propaganda) or the disinformation circulated by Fox and the right-wing infotainment media, a situation is created whereby basic facts are transformed into disputes and the nature of reality becomes a matter of constant debate. If everything the president does or says is, by definition, “news,” then Trump’s lies are amazingly dangerous and irresponsible. They will cause further harm to America’s civic culture and also the security, safety and prosperity of the country.

Apparently, Trump’s voters do not care about his lies and how he has already betrayed his promises to them before taking office. His voters, like other Republicans, are stuck in an echo chamber where conservatism is a type of religion and lies are transformed into truths: In this bizarro world Trump has a mandate to lead the country and is immensely popular and widely respected. Yet, polling data and other evidence have repeatedly shown that such conclusions are not true.

Much of the mainstream media has complied by offering up fawning profiles of Trump’s semi-mythical white working-class voters and how we need to understand them, instead of holding them responsible for imposing an authoritarian regime on the country. Trump’s voters and supporters are also depicted as ignorant or easily duped, since they voted for a candidate who have promised to take away their health care insurance and further slash away at the country’s already threadbare social safety net. Normalizing Donald Trump ultimately requires that the corporate news media normalize his voters as well.

But perhaps the most important and most easily overlooked aspect of Trump’s allure to members of his public is that they largely do not care whether he is honest, trustworthy or consistent. As Joan Williams explained in a recent essay for the Harvard Business Review, Trump’s “white working-class” voters have little to no use for experts or the educated. To a large degree, Trump’s allure was based on his promise to combat the right-wing bugaboo and obsession known as “political correctness.”

The idea that a white man should treat people of color, women, gays and lesbians and "the other" in America with basic human respect and dignity is an affront to the authoritarian social-dominance behavior that's central to the revanchist and racist identities of Trump’s voters and generally American conservatives. Hostility to “political correctness” is shorthand for the way that racism and sexism, filtered through “economic anxiety,” created a formula for victory in 2016. Trump took white racial resentment and overt bigotry and used them alternately as a feather to titillate his voters or a stone in their shoe that caused them pain.

Almost 50 years apart, two American presidents offered wisdom that helps to make sense of Donald Trump and his Svengali-like hold over a benighted sector of the white electorate.

Lyndon Johnson reflected on his upbringing in the South and the power of the color line in America this way:

If you can convince the lowest white man that he’s better than the best colored man, he won’t notice you’re picking his pocket. Hell, give him somebody to look down on, and he’ll even empty his pockets for you.

Speaking at the final press conference of 2016 — and quite possibly his last as president — Barack Obama offered a warning:

Our vulnerability to Russia or any other foreign power is directly related to how divided, partisan, dysfunctional our political process is. That's the thing that makes us vulnerable. If fake news that's being released by some foreign government is almost identical to reports that are being issued through partisan news venues then it's not surprising that that foreign propaganda will have a greater effect. Because it doesn't seem that farfetched compared to some of the other stuff that folks are hearing from domestic propagandists.

To the extent that our political dialogue is such where everything is under suspicion, everybody's corrupt and everybody is doing things for partisan reasons and all of our institutions are, you know, full of malevolent actors, if that's the storyline that's being put out there by whatever party is out of power, then when a foreign government introduces that same argument with facts that are made up, voters who've been listening to that stuff for years, who have been getting that stuff everyday from talk radio or other venues, they're going to believe it. So if we want to really reduce foreign influence on our elections, then we better think about how to make sure that our political process, our political dialogue is stronger than it's been.

Both presidents sounded the alarm about a deep sickness in America’s political culture. Trump and his voters are reflections of profound discontent and a crisis of national confidence. And Donald Trump, the contemporary master of lies and misdirection, will make things only worse while searching, as do all authoritarian or fascist leaders, for new enemies to blame when his schemes go awry.