Do Affleck and Trump have something else in common besides hosting SNL? Is the show a safe space for naughty boys? 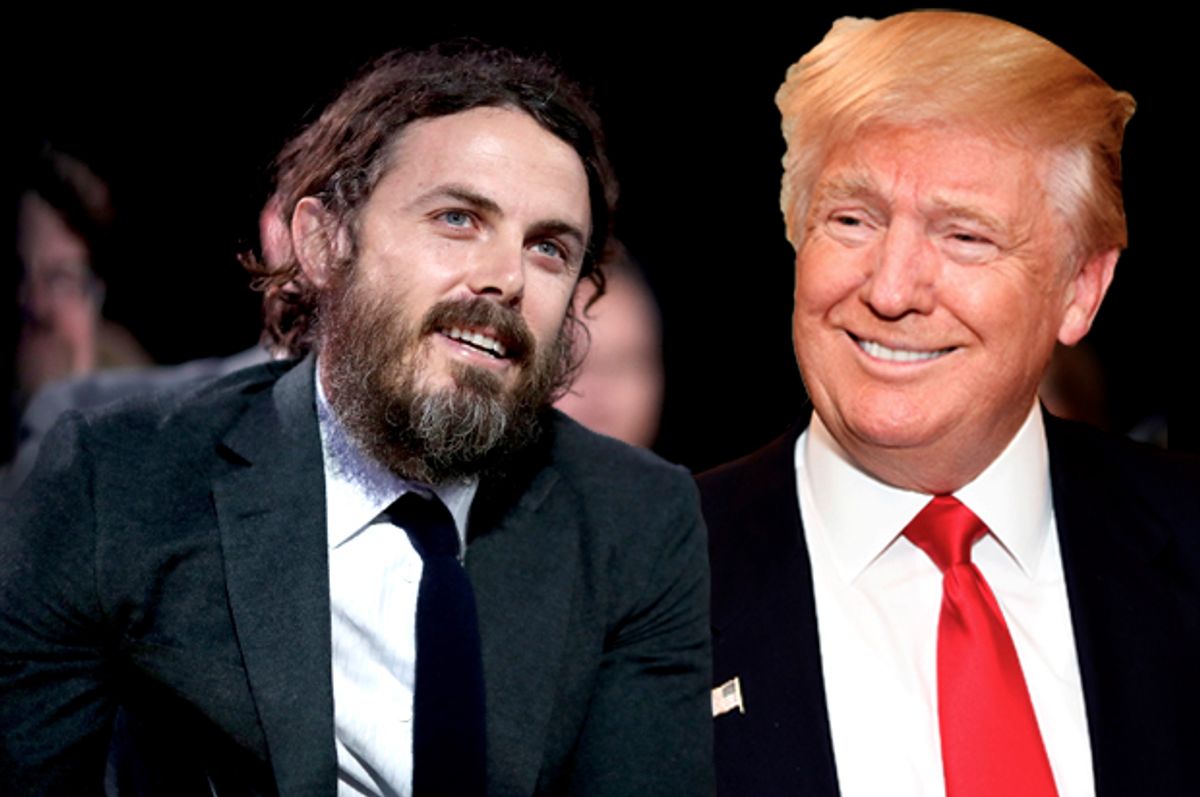 For the second time in a little over a year, “Saturday Night Live” invited an alleged sexual abuser to host the show. Casey Affleck, sporting a scraggly “Duck Dynasty” beard, showed up this past weekend to promote “Manchester by the Sea,” the Kenneth Lonergan grief drama poised to be a major Oscar contender. Affleck introduced the film as both “unbearably” and “crushingly” sad.

Each monologue that opens the show, for better or worse, has a gimmick or shtick to it. When Emma Stone returned to “Saturday Night Live” two weeks ago, the three-time host viewed the backstage at 30 Rockefeller Center as like a high school reunion, a hallowed ground filled with old memories and mean girls waiting in the wings. When Tom Hanks hosted earlier this year, the 60-year-old actor channeled his reputation as “America’s Dad” to give the divided country a pep talk in the wake of a brutal election. And if  you're a celebrity who doesn’t have a concept, just sing. It worked for Taylor Swift.

And yet “Saturday Night Live” couldn’t find much of a reason for Affleck to be there. Alec Baldwin and John Goodman, who were on hand to play Donald Trump and Exxon CEO Rex Tillerson, waited in the wings. During Afflecks's bit, the other two men frequently drifted to the center of the stage, as if ready to take the microphone from him at any moment. They should have done so.

This undercutting of the show’s host illustrated the pointlessness of Affleck’s presence, especially following the controversy over the allegations of sexual harassment he faces that have failed to garner much attention from the press. It’s a bad pattern for “Saturday Night Live,” which was accused of normalizing Donald Trump’s abusive behavior when the long-running sketch program invited the Republican presidential candidate  to host last year. It allowed the show to portray him as affable and harmless, someone who would insert the word “yuge” into the Constitution if elected.

Trump, of course, is far from benign. The incoming commander in chief has been accused of sexually assaulting at least a dozen women during his three decades in public life, with the allegations including his reaching up the skirt of a woman seated next to him on a plane and attempting to force himself on a receptionist in an elevator. Natasha Stoynoff, who was assigned to the Trump beat at People magazine, has claimed that the billionaire cornered her when she interviewed him at Mar-a-Lago, his private resort.

The politician described his history with women thusly on a leaked video made behind the scenes during his 2005 interview with “Access Hollywood.” When you’re a celebrity, Trump said, you can “do anything” you want to women, including “grab them by the pussy.”

Many of those incidents became public knowledge after Trump hosted “Saturday Night Live,” but his treatment of women and minorities was already well documented when the show invited him to appear. During his 1991 divorce proceedings, his ex-wife, Ivana Trump, had accused him of raping her following his “scalp reduction” operation to reverse the effects of male-pattern baldness. And on a 1992 segment for Entertainment Tonight, Trump appraised a young girl who was shopping for the holidays with her parents and liked what he saw. “I’ll be dating her in 10 years,” Trump said. “Can you believe it?”

In 1992 the Chicago Tribune reported that the CEO had made a similar comment about young girls performing in a choir outside the Plaza Hotel. This type of remark, in which a man of power and privilege sexualizes very young girls, has been here in plain sight for years.

When Trump hosted “Saturday Night Live” on Nov. 7, 2015, it was his second time hosting (he also appeared in 2004), but it was the first since he had publicly referred to Mexicans as “rapists.” Many expected “SNL” to challenge the presidential hopeful about his incendiary comments about Latinos, Muslims and women, but the best we got was Trump mistaking Aidy Bryant for Rosie O’Donnell and Larry David (sans Bernie Sanders attire) calling him a “racist.”

“Saturday Night Live” not only failed to take on Trump but barely used him at all, at least outside of a handful of sketches. It’s hard to remember an “SNL” host in recent memory who got less airtime than Trump, who was on the stage for just 12 minutes (with about five taken up by the monologue).

Casey Affleck, in contrast, was at the center of every single sketch during Saturday’s episode. The actor, who has appeared in films ranging from “The Assassination of Jesse James” to “Ocean’s Eleven,” played to his status as an underdog, the lesser known sibling of a famous actor. A Dunkin’ Donuts sketch allowed Affleck to go full Masshole, casually smoking outside the door of his local coffee chain and chucking a latte at someone’s car. In another segment, he’s a shy barfly who apologizes for asking out Vanessa Bayer before getting knifed by another patron, who also shares his affliction of timidity.

That meshes perfectly with Affleck’s awards season narrative, where he has portrayed himself as the humble thespian who doesn’t want to be famous. That’s the premise of “Casey Affleck Is Making Another Splash, Reluctantly,” a New York Times profile in which Affleck was portrayed as the leading man next door. His childhood friend, Matt Damon, commented that Affleck “doesn’t like to talk about himself that much or as much as other actors do.”

That may be true, but he is far from America’s “kid brother.” Affleck is someone who has used his association with the Hollywood establishment to shield himself from questions about serious sexual misconduct.

After directing 2010’s “I’m Still Here,” a faux documentary about actor Joaquin Phoenix’s “rap career” stunt, Affleck was sued for sexual harassment by two of the women he worked with on the film. Amanda White, a producer on the film, alleged that Affleck forced one of the male crew members to pull down his pants and wave his private parts at her. Affleck also allegedly propositioned her, asking White to share a hotel room with him overnight. When she declined his offer, White claimed in the suit, he “grabbed her in a hostile manner in an effort to intimidate her into complying.”

Magdalena Gorka, the cinematographer who shot the film, has alleged similar abuse. She claimed that one evening after working late on the movie, the crew all crashed at Affleck’s apartment, including Gorka. She slept in his bed while he remained on the couch. But during the night Gorka claimed, she woke up to Affleck next to her, drunkenly caressing her body. She called the incident “the most traumatizing of her career.”

Both women settled their cases out of court for a confidential amount. The original suits had each requested more than $2 million in damages and distress.

But as New York magazine’s Allie Jones has written, you’ve probably heard very little about this case in the mainstream media; this is likely due to the influence of Affleck’s famous confidants, who have been a “united front” throughout awards season. “Ben and Matt have been particularly present throughout Casey’s Oscar campaign, showing up smiling to premieres and posing for photos as a trio,” Jones explained. “This brotherly posing makes prestige outlets hesitant to ask the younger Affleck tough questions, for fear of losing access to all three stars.”

“Saturday Night Live” was never going to be the show to take Casey Affleck to task for his past, but it also didn’t have to give him a platform. By doing so, the show continues to send a message to women that their safety and bodily agency are less important than ratings — which were through the roof for Saturday night. The Christmas episode, always one of the sketch comedy’s most-watched episodes of the year, drew the biggest numbers for “SNL” since its postelection episode. If you remember, that’s when Dave Chappelle told America to “give Trump a chance.”

By allowing Affleck to peddle the same narrative that will likely win him awards gold in February, “Saturday Night Live” has shown that it has learned absolutely nothing.