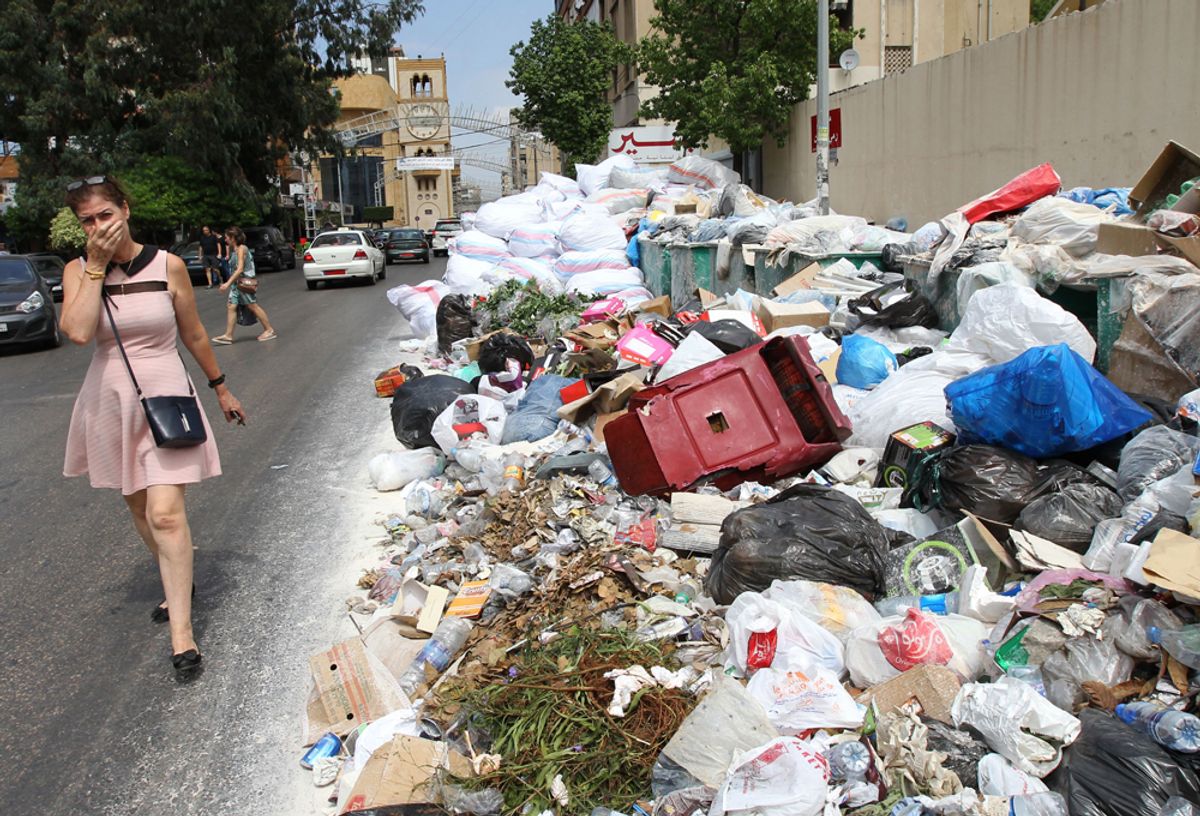 A woman holds her breath as she walks near a temporary garbage dump in the neighbourhood of Jdeideh, northeast of the Lebanese capital Beirut on September 1, 2016. Lebanon has been going through a garbage crisis caused by the closure of its main landfill more than a year ago. / AFP / ANWAR AMRO (Photo credit should read ANWAR AMRO/AFP/Getty Images) (Afp/getty Images)
--

Environmental issues had a marginal impact on this year’s elections. This hard truth and the strong pro-fossil-fuel tilt of President-elect Donald Trump’s cabinet are a wake-up call for the U.S. environmental movement.

Based on reported cabinet selections that include Oklahoma Attorney General Scott Pruitt as EPA administrator and Washington Congresswoman Cathy McMorris Rodgers for secretary of the interior, what environmental policies can we expect from the Trump administration? Here’s a tentative list: Environmental regulations and enforcement will be weakened, the EPA will be defunded, public lands will be opened for energy development, oil pipelines will be approved, the Clean Power Plan will be scrapped and the United States will seek to withdraw from the Paris Agreement on climate change.

Arguably, the 2016 presidential election should have become a referendum on environmental issues. After all, the scientific case for climate change is solid, to put it mildly. The havoc caused by major weather events such as Hurricane Sandy, which scientists say will become more frequent as climate change progresses, is obvious. The American West is experiencing record drought, and every year seems to be the hottest on the record. The Flint water crisis has revealed horrible racial inequities perpetrated by government agencies responsible for providing citizens with clean water.

Why did these issues have so little influence? Based on our research in environmental policy and politics, we believe that U.S. environmentalists are somewhat disconnected with ordinary voters, and consequently are failing to persuade these voters to pay serious attention to environmental issues. In our view, the movement needs a new agenda and communications strategy to reach beyond its roots and connect with working-class voters and immigrants.

Environmental issues were nearly ignored during the 2016 campaign. While Democrats did talk about addressing climate change in their primaries, Republicans had nothing but scorn for it. In the general election, Clinton and Trump barely mentioned the issue.

At the same time, opinion polls suggested that a majority of Americans were concerned about the environment and generally supported environmental protection. In an October survey by the Pew Research Center, 73 percent of respondents, including 49 percent of Trump supporters, cared a “great deal” or “some” about climate change. In a Gallup poll, 56 percent of respondents agreed that environmental protection should be given priority even at the cost of economic growth.

Are opinion polls disconnected from voting? And why was climate change not a top issue even for Clinton voters? One reason may be that opinion polls suffer from the “social desirability” bias. While poll responses are supposed to be anonymous, respondents may still try to be politically correct by supporting environmental causes, although those responses do not reflect their true feelings or actual behavior.

Moreover, poll questions are not framed to highlight trade-offs voters might have to make to fund environmental protection. It is easy to support a “free” policy that protects the environment, but respondents temper their views when they are asked to consider costs.

For example, in a recent study funded by the University of Chicago’s Energy Policy Institute, 65 percent of respondents agreed that government should do something about climate change, but only 57 percent were willing to pay as little as $1 per month more for low-carbon electricity to support such a policy. Instead, many people want to free-ride and let others pay for their environmental benefits.

Environmentalism is also a victim of its own success over the last 40 years. Thanks to numerous federal laws, most Americans are now fairly satisfied with the quality of the natural environment and do not believe they need to fight for it. Only 16 percent see themselves as active participants in the environmental movement.

Regulations benefit all, penalize some

Critics’ main argument against environmental regulations is that they hurt the economy. Economically depressed groups are prone to look for scapegoats, and environmental regulations are a convenient target. As an example, mechanization and technical changes are the main causes of falling employment in the coal industry, but impacted states and communities tend to blame a visible target: regulations.

Republican politicians argue vigorously that regulations are “job killers.” But they are not alone. Blue-collar unions — pillars of the Democratic Party — also oppose environmental regulations when they believe jobs are at stake, as in the Dakota Access Pipeline controversy. The United Mine Workers strongly oppose the Clean Power Plan, which is designed to limit carbon emissions from coal burning electric utilities.

Toward a new strategy

In advocating new environmental protection measures, environmentalists should take greater account of who will bear the costs and demand that they be compensated. We call this approach embedded environmentalism.

Hillary Clinton’s Appalachia plan reflected embedded environmentalism because it offered a $30 billion program to aid coal-producing communities that would be harmed by Obama’s Clean Power Plan. Perhaps this sort of regulation-cum-compensation approach will help foster a green-blue alliance where workers and environmentalists join to protect the environment and safeguard the economic interests of impacted people.

Environmentalists also need to convince immigrants — who may put much greater priority on jobs and economic security — to support environmental protection. But the environmental movement has struggled to establish a rapport with nonwhite communities because the major advocacy groups lack diversity. People of color account for only 15 percent of the staff of major environmental organizations and do not hold top leadership positions in any of the largest groups.

Moreover, these organizations’ policies are informed by constituencies that have historically supported them: middle- and upper-class white urban voters. As one example, protecting national parks and public lands is a signature issue for U.S. environmentalists, but data suggest that minorities spend less time in the outdoors than white people do. Public land protection may therefore not be an effective cause for mobilizing minorities, especially economically disadvantaged groups.

Contrary to popular perceptions, minorities do care about environmental issues, including global climate change. Environmental initiatives will sway their votes if they address local concerns, such as air and water pollution and clean drinking water, and workplace hazards, such as pesticide exposure for immigrant farm workers.

To become an influential social movement once again, U.S. environmentalists will need to “go local.” Instead of telling people what they ought to do, they will need to pay attention to minorities’ and workers’ perspectives. Shedding urban elitism will require critical and painful self-reflection, more investment in green-blue alliances and an honest attempt to diversify the environmental movement and its agenda.