"Drain the swamp" — of all those P.C. liberals! Turns out Trumpers don't care about lobbyists or plutocrats 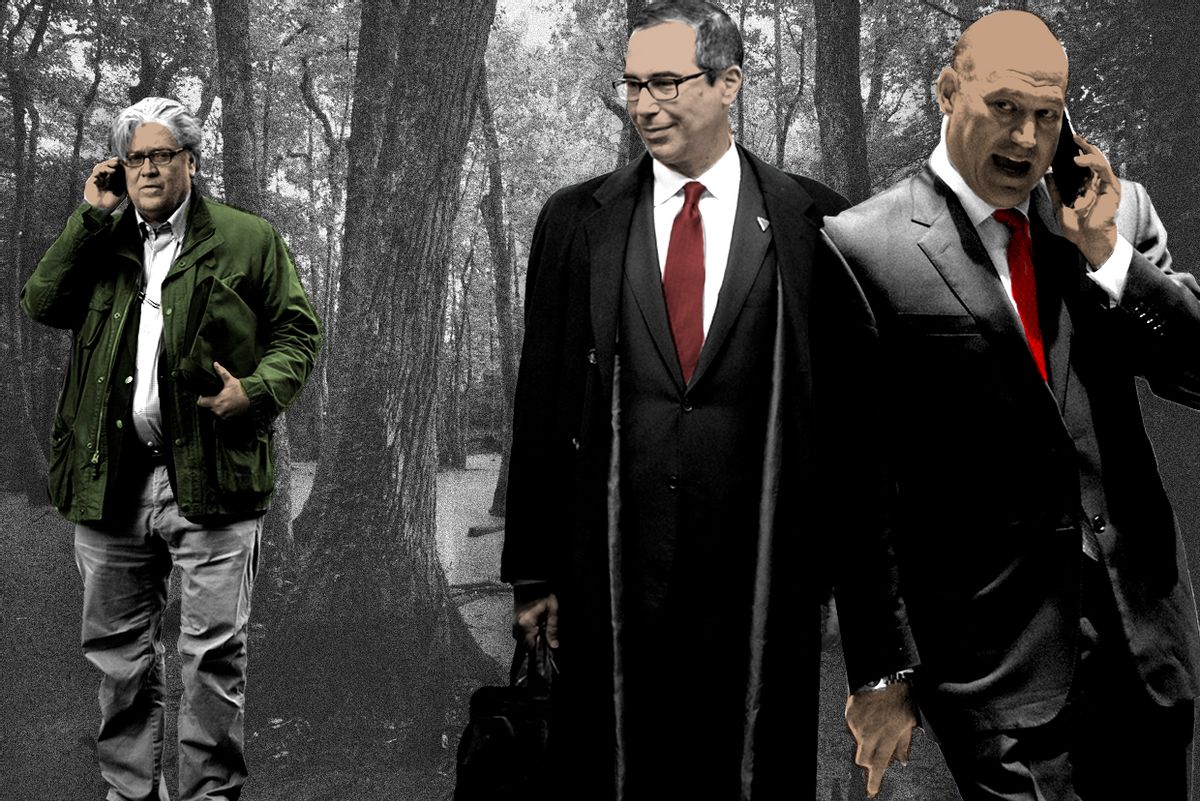 During the campaign, Donald Trump frequently promised that once in Washington he would "drain the swamp." That phrase was generously interpreted by huge swaths of the news media to mean that Trump intended, in populist style, to reduce the influence of elite bankers and corporate lobbyists in politics. That, in turn, means that the president-elect is now being accused of hypocrisy after he turned around and started hiring a bunch of bankers and billionaires and other such swamp critters.

But there's little evidence that Trump's supporters ever thought he was talking about the influence of financial elites or big corporations when he swore to drain that swamp. On the contrary, they seem to have understood his remarks as an attack on liberalism and its defenders.

A new poll, conducted by the Glover Park Group and Morning Consult and released on Tuesday, asked a series of far-ranging and in-depth questions of Trump supporters. What one finds, digging into the results, is that Trump's base of voters has no coherent ideology around economic issues like trade policy or financial regulation.

When it comes to hot-button issues around race, gender or general hatred of liberal ideas, there are a cohesive set of opinions from Trump voters. Needless to say, it's not pretty.

For instance, here are the results of a poll question about regulating financial industries, a matter that was exactly the sort of thing that liberal audiences (and many mainstream journalists) thought Trump meant by "drain the swamp." The survey also found that 46 percent of the Trump voters polled support the Dodd-Frank law that regulates banks and financial institutions, while only 27 percent want to scale it back or repeal it. That is noteworthy because Trump and his team have repeatedly made it clear that getting rid of the Dodd-Frank act is a major priority.

So this poll data suggests that some Trump supporters favor increased financial regulation, some are against it and a whole bunch of people don't know. Most important, opinions on financial regulation are not what holds Trump voters together as a voting bloc.

You get a similar mishmash of opinions on foreign trade, despite many well-meaning pundits assuring us that Trump's periodic bashing of free trade was a major motivator for his voters. But when issues that have more culture-war salience are considered, suddenly a coherent ideology emerges. For instance, 60 percent of the Trump voters surveyed think that abortion should be banned, in contrast with the majority of Americans who believe that it should be legal in most or all cases. A whopping 39 percent of Trump voters believe that women who get abortions should face legal punishment, an opinion that is otherwise so unpopular that even the anti-choice movement disavows it.

The survey didn't touch on the issue of immigration much, though Trump had campaigned heavily on it. The answers to the one such question the survey did explore shows that, unlike with trade issues, Trump supporters have a strongly shared opinion on legal immigration — and that opinion is hostile. (It's worth noting that Trump's current wife, Melania Trump, worked in the United States with an H-1B visa. The fact that this doesn't offend his supporters suggests that when they imagine H-1B visa recipients, they aren't picturing white women from Eastern Europe.)

The results on health care are perhaps the most telling. Pollsters made a point of calling the Affordable Care Act "Obamacare" and when they did so, they found widespread support for scaling back or repealing the law. When the pollsters asked Trump supporters about the health care law without using President Barack Obama's name, they got very different answers. Only 13 percent of Trump supporters opposed the ACA regulation requiring insurance companies to cover people with pre-existing conditions. Only 24 percent opposed the insurance subsidies. Only 17 percent were against the regulation requiring preventive care to be covered without a copay.

But when asked if birth control should be covered as preventive care, the number of people in opposition doubled, to 35 percent of the respondents. This result once again shows that culture-war issues — in this case, anger over women's sexual liberation — are driving Trumpism.

These results suggest that the problem with Obamacare is not the "care" part, but the "Obama" part. It's also important to remember that the ACA has been demonized for years by right-wing media outlets, which depict it as a massive wealth transfer from middle-class white Americans to the supposedly undeserving poor. But removing these culture-war markers from the ACA discussion strikingly reduces the amount of opposition from Trump voters.

That's why it's important, especially for journalists, to not assume that the phrase "drain the swamp" is meant by Trump, or heard by his supporters, as describing the influence of special interests or lobbyists on Beltway politics. Yes, that's what most politicians mean when they use that phrase. But there's reason to believe that for Trump, it's a vague phrase that allows his followers to define "the swamp" however they want. And what they really want to do is hate on liberals.

Trump himself admitted that the phrase is empty rhetoric he spews because it's a good applause line. At a postelection rally in Iowa, Trump let this bit of truth slip out during one of his tedious ramblings:

A look at the hashtag #DrainTheSwamp on Twitter shows that most of the Trump supporters tweeting with it refer to "the swamp" not as special interests or corrupt politicians but as anyone perceived as liberal or not conservative enough. People using that hashtag spend a lot of time calling Hillary Clinton a "bitch," denouncing immigrants or complaining about liberal Hollywood celebrities. The only people discussing wealthy special-interest groups are liberals trying to hijack the thread.

Last month white nationalist Richard Spencer, one of the originators of the alt-right, got explicit, quoting a Russian white nationalist named Alexandr Dugin, who bluntly defines "the swamp" as anti-racists, humanitarian liberals and LGBT activists.

Most Trump supporters don't go that far, but the conversation on Twitter shows that, by and large, "drain the swamp" is understood as a culture-war term referring to liberals — not corrupt politicians. That comports with this new polling data suggesting that Trump voters are an incoherent mess when you ask them about regulating the financial industries or corruption in politics, but have a strongly cohesive ideology when it comes to race or gender issues.

"Drain the swamp" started out sounding like a catchy way to describe the undue influence of the rich and powerful, and no doubt many people who use it intend it to be understood that way. But it's time to admit that the phrase morphed into hateful rhetoric that has terrifying undertones, like so many other things about the impending Trump presidency.