In 2016 angry men, fed up with all the women in pop culture, turned to Donald Trump to prop up their fragile egos 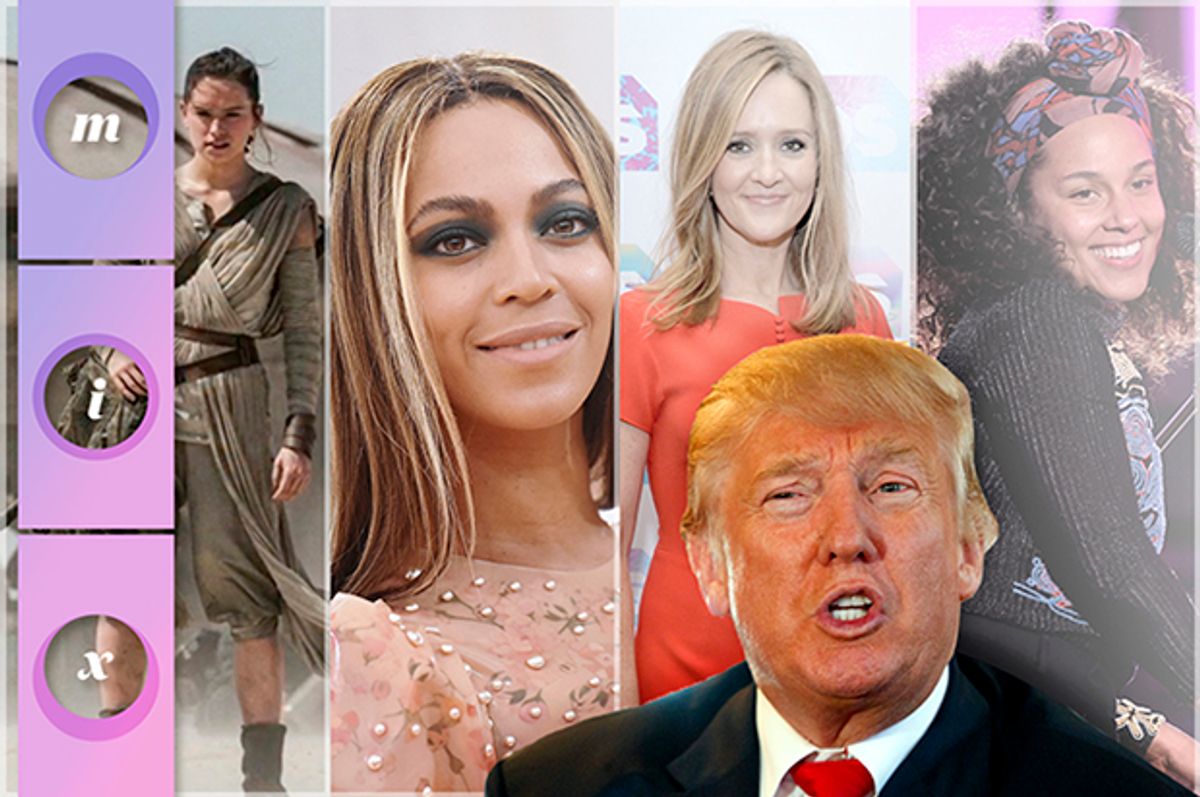 In July after watching the Democratic National Convention, Scott Adams — the creator of "Dilbert" who has spent the internet age revealing himself to be a shockingly whiny misogynist and pseudo-coy Donald Trump supporter — took to his blog to argue that Hillary Clinton was going to lose the election because the Alicia Keys scares men.

I watched singer Alicia Keys perform her song Superwoman at the convention and experienced a sinking feeling. I’m fairly certain my testosterone levels dropped as I watched, and that’s not even a little bit of an exaggeration. Science says men’s testosterone levels rise when they experience victory, and drop when they experience the opposite. I watched Keys tell the world that women are the answer to our problems. True or not, men were probably not feeling successful and victorious during her act.

It's easy to laugh at Adams, who is a pompous ass straight out of a Vladimir Nabokov novel. The blog post was little more than sexist hysteria poorly disguised as pseudoscientific babbling. But underneath it all, Adams did sadly key into one important observation about his fellow white male Americans: They are so easily threatened by images of women having power that they were ready to vote for Mr. Grab Them by the Pussy rather than see someone in high heels sitting in the Oval Office.

OK #NotAllWhiteMen. Just 62 percent of them.

What is interesting about Adams' piece is that the woman he singled out was not Elizabeth Warren or Michelle Obama or Hillary Clinton — political figures making appeals based on real world policy matters — but an R&B musician singing a song. It took a lady making art to crack his fragile ego.

Women in entertainment have historically struggled to attain creator roles. On screen, women are often relegated to the background; they're there to look pretty but not given speaking roles — much less top billing. Behind the scenes, things are even worse,  with the vast majority of directing chairs and writing rooms being filled by men. In the music world, women get to be singers (they're there to look and sound good performing other people's work) but they aren't as well-represented as among the musicians, writers or producers — that is, the people perceived as creators.

But in recent years, there's been a perceptible move in pop culture toward elevating more women into these creator roles. Keys is an excellent example of that in pop music. She's not Katy Perry, standing there looking pretty while channeling someone else's music. Keys is a songwriter and piano player, occupying creative space that used to be more predominantly male. And that can be read as threatening.

For those who prefer women in the movies to keep their mouths shut and their tits out, 2016 was a rough year. Things kicked off at the tail end of 2015, when the new "Star Wars" movie, "The Force Awakens," was released and the star of the rebooted franchise was not be a man, as it always had been before, but a woman: Rey, played by Daisy Ridley.

The revelation caused a major stir, as some fans filled message boards with accusations that Rey is a "Mary Sue," using the derogatory term for a character who is more about wish fulfillment than well-rounded characterization. The problem is that Luke Skywalker, from the original series, is nearly the exact same character but somehow it's less objectionable when the cipher for audience fantasies is male.

Now this month, another "Star Wars" movie called "Rogue One" is out with a female lead, and men of the internet are melting down again.

What Rogue One would be called if it was left up to the people currently having a meltdown in the Daily Mail comments section pic.twitter.com/tAQHxkPMbd

That's after another series reboot landed this past summer with women at the center: the comedy sci-fi movie "Ghostbusters" included Kristen Wiig and Melissa McCarthy playing updated versions Bill Murray and Dan Ackroyd's characters from the 1984 movie. Male fans raged incessantly, insisting that the casting was a sop to political correctness and denying that director Paul Feig might actually think McCarthy and Wiig are as talented as their male counterparts.

The whining might lead one to think that women now completely dominate movies and TV shows, but a study of the top 100 grossing films in 2015 showed that only 31 percent of named characters were female. Even in "The Force Awakens," 78 percent of the lines are spoken by men. There's no reason to think this problem has significantly improved in 2016. (Listen to a conversation with Andi Zeisler, author of "We Were Feminists Once," about this "feminist fallacy.")

That said, while the amount of female representation is nowhere close to levels of equality, there can be no doubt that female artists are becoming more visible. Beyoncé, Taylor Swift, Lena Dunham, Shonda Rhimes, Ava DuVernay — to name a few — are women who have become famous not just by being pretty faces but by having strong creative visions they realize through their work.

Unfortunately, even these tiny gains are causing an enormous backlash. And that backlash is becoming politicized in the worst possible way.

Sady Doyle, the author of "Trainwreck: The Women We Love to Hate, Mock, and Fear . . . and Why," argued that this politicization process started in 2014, with a movement called Gamergate, an online effort to hound and harass women in the video game industry who were perceived as feminists or overly critical of sexist imagery in video games.

Gamergate "was easy to write off," Doyle told Salon via email. "It was nerd stuff; it was a bunch of feminists complaining about their comment sections or their Twitter notifications, and there's absolutely nothing people are more eager to write off than a woman's story of being harassed."

But while many liberals and mainstream media observers shrugged it off, conservatives like Breitbart editor Milo Yiannopoulos — whose former boss, Stephen Bannon, is now Trump's chief strategist — and conspiracy theorist Mike Cernovich has found political potential in it. These men openly saw Gamergate as an opportunity to recruit young men to hard-right politics.

Gamergaters, Reddit trolls, and other angry-young-nerd communities "formed a hideous Voltron with neo-Nazi and other factions," Doyle said. "Within two years of Gamergate, they were powerful enough to take the White House and usher in a new fascist era."

David Futrelle who runs the We Hunted The Mammoth blog, which is devoted to tracking (and mocking) online misogyny, agreed with Doyle's assessment.

"First came the attacks on women in video games and the ludicrous phony boycotts of 'Ghostbusters' and 'Mad Max: Fury Road' for the crime of having women as the main characters,"  he said via email. "Then came the Breitbart-ization of politics and the election of an authoritarian narcissistic manchild to president."

There were many factors, of course, that led to the political rise of Trump: Racism on the right, complacency on the left, voter suppression, a weak and overstuffed field of Republican candidates. But the rise of feminism in pop culture is causing an ugly backlash, and that has also fed into the growth of Trumpism.

It's not just feminists who are connecting Trumpism to anger over the perceived cultural shift toward greater diversity. Many conservative commentators and liberals who are skeptical of identity politics see it, too, even if they are more sympathetic to the male anger.

Ross Douthat of The New York Times complained of "the rapid colonization of new cultural territory by an ascendant social liberalism," arguing that "the feeling of being suffocated by the left’s cultural dominance is turning voting Republican into an act of cultural rebellion."

Translated from pseud0-intellectual conservative columnist speech to English: White men are going to keep voting Republican until you liberals get all those women and black people away from their TV sets.

Douthat has the high-minded rhetoric, but there's a gutter version of the same argument, from Andrew Anglin at the Trump-loving white supremacist site The Daily Stormer. Anglin is pushing for Trump to create right-wing death squads that target "degenerate artists and musicians who are degrading our society with corrosive filth."

Even some liberals, of the whiter and more male sort, are getting in on the action. In a widely shared piece for The New York Times, Mark Lilla wrote that the emphasis on diversity "has distorted liberalism’s message and prevented it from becoming a unifying force capable of governing" and causes white voters to turn "against the omnipresent rhetoric of identity, which is what they mean by 'political correctness.'"

Lilla, Douthat and the white supremacists at The Daily Stormer grasp that America is facing a cultural backlash and the Samantha Bees, Lady Gagas and fremale Ghostbusters have sent a bunch of angry men into paroxysms of rage that has led directly to a Trump vote. Where they err, whether in sorrow or glee, is in assuming that the answer to the problem lies in giving the angry men what they want.

But giving in to blackmail is not a good idea. For one thing, how would it even work to end the emphasis on diversity — or whatever other euphemism you want to use for elevating mediocre men over talented women?

November's election gave angry men an opportunity to force a deserving woman to step aside for a talentless man, but the casting decisions for "Star Wars" movies are not put  to a vote. Beyoncé is famous because she sells records, and woe be it to the man who tries to convince the Beyhive to dial down the enthusiasm because it makes the white guys whiny.

More important, the only reason this ugly backlash is happening is that men were already spoiled by a pop culture environment that elevated them at the expense of women. The only way to have men become accustomed to the idea of women as Jedi knights — or as president — is to put women in those roles.

Plus, as consumers of pop culture products, we should want more women as creators and innovators because we benefit.

While 2016 was a sad and disturbing year, its few bright lights arrived largely because of women (who, in the past, may have had their ambitions stifled). When I asked my Facebook peeps about some of their favorite woman-centric media of 2016, the list amounted to some of the best work of the year: "Broad City," "Crazy Ex-Girlfriend," Beyoncé's visual album "Lemonade," Kate McKinnon's work on "Saturday Night Live," "Jane the Virgin" and the return of "Gilmore Girls" to Netflix.

These cultural touchstones weren't great because they were checking off boxes on an identity liberal's wish list. Some of them (ahem, "Gilmore Girls") aren't even particularly diverse, outside of having women at their center. No, these examples are great work, regardless of gender. We shouldn't have to give up these women's offerings in some ill-advised effort to placate those who want to make America "great" (read: sexist) again.