It is a mad, mad world when Samantha Bee and Glenn Beck show us how to be allies for the sake of the common good. 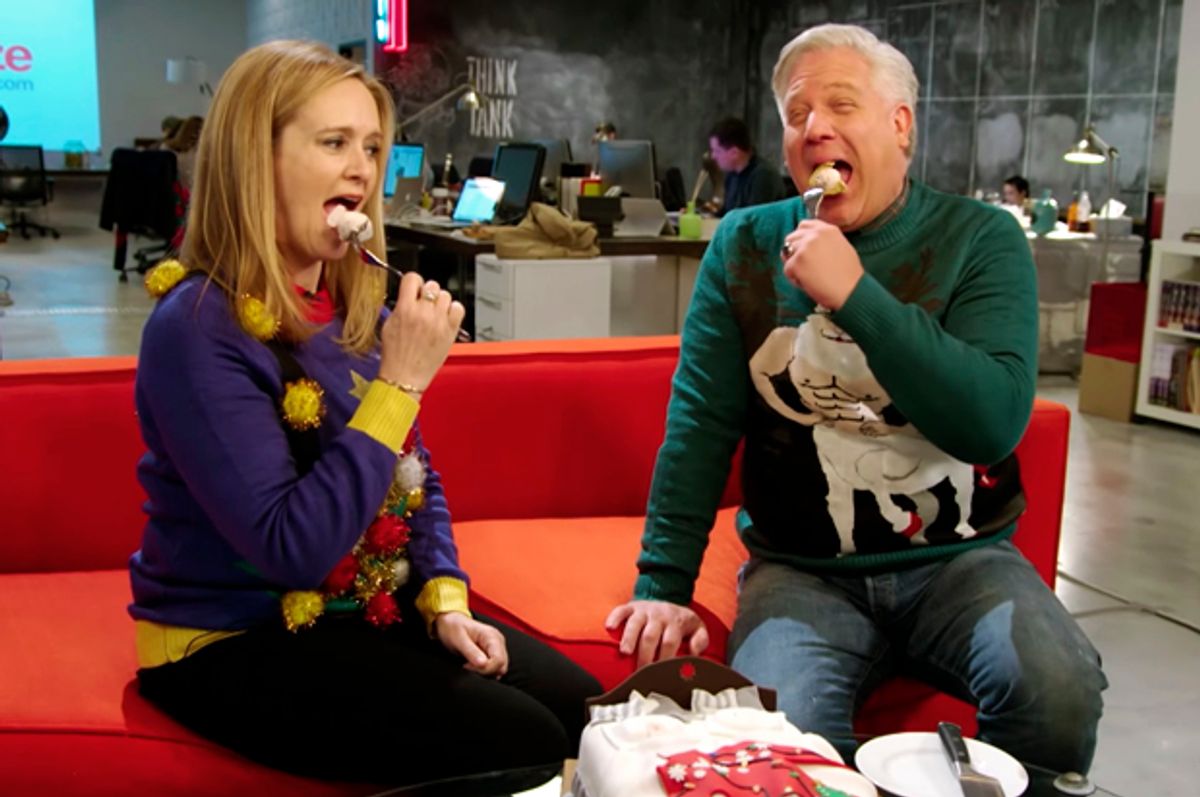 Monday night’s broadcast of “Full Frontal with Samantha Bee” was the show's last new segment for the year and it ended on a conciliatory note of truth that may have felt uncomfortable to a number of her viewers.

“Our future is going to require a broad coalition of nonpartisan decency,” Bee says during the TBS program. “It’s not just individual people against Donald Trump; it’s all of us against ‘Trumpism.’ I actually think it’s important to reach into places where we wouldn’t normally reach.”

That's a perfectly reasonable observation. The discombobulating part of it is that she said it to Glenn Beck, whom she invited on her show.

Beck, a conservative pundit and founder of TheBlaze, spent more than 15 years ripping into the left with hyperbolic conspiracy theory-laden rants so incendiary that his brand eventually became too toxic for Fox News. Viewers who only know this version of Beck may have been shocked by his even-keeled response to Bee: “I agree.”

Granted, their exchange feels odd only if you weren’t aware of Beck’s new guise. He is now a champion of unity, a guy who regrets peddling profoundly negative rhetoric that ranged from offensive (calling Barack Obama a racist) to the morally repugnant (like the time he admitted he hated families of the victims of 9/11 and Hurricane Katrina). He probably doesn't regret that perpetuating such caustic discord has made him a millionaire many times over.

Anyway, this relatively new Beck did some soul-searching after a phone call with Trump while both were in adjacent rooms at his Mar-a-Lago estate that left Beck with the impression that the man is “dangerously unhinged” and needs to be stopped, according to The New Yorker. If you were under any illusion that the situation wasn’t dire by the beginning of September, reading Beck’s op-ed in The New York Times might have slapped you back to reality. The Beck that Sam Bee sat down with has since alienated deep red conservatives by suggesting empathy for the Black Lives Matter movement and has dismayed his followers by contributing to causes benefiting refugees and undocumented immigrants.

Bee’s viewers have ample reason to question the legitimacy of Beck’s conversion beside what some fear may be the deathbed of American democracy. It is an odd, odd world for a liberal to suddenly realize that she’s on the same page as the man whose company still employs misinformed wingnut Tomi Lahren. But the larger takeaway from Bee and Beck’s Monday exchange is that we’d better hope his new paradigm is real and that more pundits from both sides are willing to start building bridges to serve the greater good.

Beck’s appearance on “Full Frontal" did not require Bee and Beck to entirely sacrifice their sting. The host opens their conversation thusly: “My audience is going to think I’m crazy for sitting down with you.”

“My audience hates your guts more!” she retorts, leading him to gleefully respond, “My audience would like to stab you relentlessly in the eye.”

In spite of how this sounds, the moment had the air of innocent fun. Bee even gamely wore the uglier of the Christmas sweaters worn by both. Keen analysts of the psychological messages we send via fashion choices may see this as the equivalent of offering a box of conciliatory candy in addition to an olive branch. Call it marzipan.

Beck admits to Bee that he has done damage to America’s unity and that he doesn’t want to do any more. Then he makes the poignant suggestion that perhaps Bee wants to rethink the tone she adopts in her show in order to refrain from continuing to deepen the corrosive and widening political chasm splitting the nation.

“I know what I did. I helped divide. I’m willing to take that,” he says. “My message to you is, please don’t make the mistakes that I made.”

Later he adds, “I hate to break it to you — see, I’ve been watching you — you’ve adopted a lot of my catastrophe kind of traits.”

The scary thing is, he is right — to a degree.

“Full Frontal with Samantha Bee” stood out from the pack during its first year in no small part due to Bee's passionate, pointed analysis and responses to the crap being thrown around in the world of media, politics and social causes. Within the past three years the late-night talk show realm has experienced a major sea change as the old guard of Jay Leno and David Letterman ceded their thrones to a wave of fresh hosts, including the debuts of high-profile news-skewering series helmed by three of Bee’s former “The Daily Show” colleagues John Oliver, Stephen Colbert and Larry Wilmore.

The insult over not being included in a 2015 Vanity Fair profile of late-night’s newcomers — all of them men — only appeared to invigorate Bee’s ferocity. She came out swinging in the February debut of “Full Frontal” and hasn’t pulled back since. During Monday night’s show she even joked that conservatives who only read about her show think of her as “an ultra-liberal harpy paid by Killary to crap on everything decent in America.”

Moving the nation’s political conversation forward, whether in the realm of punditry or satire, is going to require a level of reason that defies partisan rancor. By ending 2016 with this odd observation that 2017 is going to lead to many alliances between strange bedfellows, Bee has telegraphed that we should perhaps expect a different if still mordant brand of humor when she returns.

It must be said that Bee’s fiery indignation in 2016 was welcome and justified; how else did we expect her to filter through a year that infuriated so many and on multiple fronts? And who else was calling out the sexist double standards at work in the media's coverage and parsing of the presidential campaign? Also, those condemning Bee’s alleged shrillness may want to examine what role misogyny plays in their assessments. If you’re not calling out John Oliver for employing similarly scathing humor in his HBO program, check yourself.

But the challenge for Bee and Oliver and “The Daily Show with Trevor Noah,” and every other satirist and pundit employing actual journalism to inform their work, will be to find a way to retain their necessary comedic edge while speaking to the broadest relevant truths.

That doesn’t mean Bee and Beck shouldn’t stop being catastrophists. If ever there were a time to sound alarm bells and awaken sleeping viewers to a renewed level of vigilance, it is now. And if bringing disparate sides to the table requires chewing on a some funny-tasting, tough-to-swallow peace offerings along the way, so be it.