Be grateful for what was good: 15 musicians share the art they loved the most in 2016

From Colson Whitehead's "The Underground Railroad" to Frank Ocean's "Blonde," here's an art offering to smile about 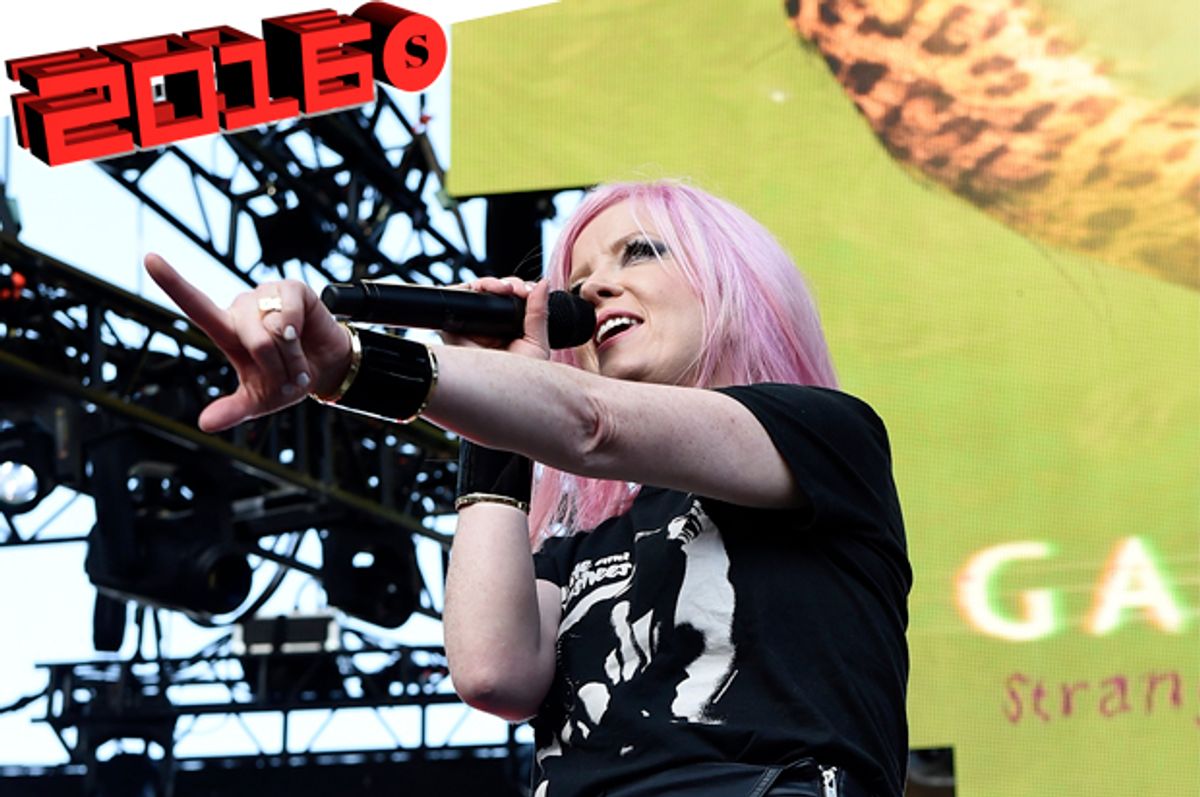 For much of November and December, critical consensus is dominated by analysis of (and debate about) the best art released in a given year. These lists are big business these days: As of Dec. 19, the blog Largehearted Boy — which annually compiles a comprehensive collection of rankings across multiple art forms — counted a staggering 904 online "Best of 2016" book lists. In other words, at a certain point, keeping track of the best "best of" lists becomes an exercise in futility — or at least information overload.

To make things simpler, Salon decided to ask a handful of musicians to share what 2016-released art — across mediums such as music, movies, TV, books and podcasts — resonated with them the most this year. Although certain items cropped up on several lists, their answers generally varied and reflected the embarrassment of cultural riches that redeemed the year.

I read "The Underground Railroad" by Colson Whitehead, and am amazed at how it keeps popping back up in my thoughts. Given the rampant killing and imprisonment of black people in modern America, it is a very timely book. Whitehead created surreal versions of South and North Carolina that seem less and less surreal as the convoluted political machinations of today unfold.

I keep coming back to “Shrill” by Lindy West. I was just really affected by this book. I actually felt differently when I finished it. I’m obsessed with her brain.

Megumi Igarashi, who makes art under the name Rokudenashiko (or "good-for-nothing"), is a Japanese artist and sculptor who was arrested and jailed in 2014 for creating artwork featuring the shape of her vulva, a violation of Japanese obscenity laws. She tells that story in "What Is Obscenity? The Story of a Good For Nothing Artist and her Pussy," an autobiographical and decidedly anti-censorship manga about Rokudenashiko's career in manko ("pussy") art, which celebrates the vagina and pushes back against the idea that genitalia is obscene.

The story is interlaced with essays, interviews, criminal justice statistics, legal transcripts from Rokudenashiko's trials, and photos of her bright and hilarious sculptures, one of which is a 3D-printed rainbow kayak in the same shape as her vulva. "My ideas have infuriated a bunch of small-minded men," she says, "but the number of people who think it's fun, silly, happy, and hilarious have also grown." It's an in-depth — and also very cute — exploration of sexism, corruption, taboo, and the importance of art and humor as a force of love and acceptance.

The film "Moonlight" absolutely took my breath away. I found myself attached to each character in a way that I rarely feel with other films. It was simply incredible.

My wife and I sat in the theater smiling ear to ear for almost the entire running time of Richard Linklater’s "Everybody Wants Some!!" Back home afterward, when I tried to imagine how a screenplay, consisting mostly of dialogue and character names, could have been the finished thing’s premeditated blueprint, I was awed and mystified.

This is a comedy grounded not in cleverness or concept, but in a perfectly sunny view of life, and one in which every laugh comes out of character and is sweetly edged by gorgeous production design, period music and impeccable ensemble acting.  Also, a plot with zero conflict — no bullshit to tie your stomach in knots in the second reel. This is one of those movies, like "Breaking Away," that manages magically to feel just like everyday American life, while improving on it in every detail.

2016 was such a ridiculously terrible year on so many levels. But it did produce some seriously fine works of art. I was blown away by the film "Moonlight" (along with perhaps everyone else who saw it). Loved Springsteen’s autobiography ["Born To Run"] and Bob Mehr’s book on the Replacements ["Trouble Boys: The True Story of the Replacements"]. Adam Johnson’s short story collection, "Fortune Smiles," was truly one of the greatest things that I have ever read.

Like most everyone else, I was blown away by the albums of Beyoncé ["Lemonade"] and Bowie ["★"], but was also in love with the albums from Solange ["A Seat at the Table"], Hiss Golden Messenger ["Heart Like a Levee"], Angel Olsen ["My Woman"], Radiohead ["A Moon Shaped Pool"] and Cass McCombs ["Mangy Love"]. I pretty much missed the year in television (as I didn’t have a properly working TV) but I’m about to get one and intend to binge-watch Ray McKinnon’s final season of "Rectify," which I hear is the best yet.

"Certain Women" felt simple, truthful, and quietly stunning. I love Laura Dern more than water. "Christine" was shocking and leanly executed. Rebecca Hall's performance was incredible. Knowing the history of the narrative beforehand made it no less compelling. "Nocturnal Animals" is still ruminating in my head. I felt like I was smashed in the head with it, and don't know [if] that was a good thing, though it certainly was beautiful.

[Music-wise] "Blonde" by Frank Ocean, "Freetown Sound" by Blood Orange, "ANTI" by Rihanna, "The Life of Pablo" by Kanye West, "Views" by Drake, "★" by David Bowie, "A Seat at the Table" by Solange — these were all my favorites this year, because they all sounded incredible. More important, they all made me think and feel. To enable and encourage an experience — be it pure fun [and] enjoyment or something much heavier — that is success.

I loved the movie "Sing Street." I think we all have a tendency to get a bit cynical these days, and watching a movie about a poor, nerdy Irish kid starting a band was enough to move me out of that, if even for a moment. Watching kids make art for the sake of art and find joy in it, with little reward, that's a feeling I'd like to find again. Plus, it was hilarious!

[The book] "Fight Like A Girl" by Clementine Ford outraged me. It nourished and amused me. And it lit a fire under my ass. What more can you ask from a piece of literature? I'm giving it to everyone I love for Christmas.

An instrumental band called Battle Trance made one of the best records you probably didn't hear this year, called "Blade of Love." They're a tenor sax quartet, but they don't make the sound you might be thinking of — or they do, but only on the way to sounds you've never imagined coming from saxophones. "Blade of Love" is a single, thrilling 40-minute piece, a beautiful and frightening journey that seems to contain almost every kind of feeling you might have about our world right now — all its promise, beauty, darkness, and terror. Seeing them perform it in a small church in New York this year was one of the most transcendent listening experiences I've had in a long time, and disquietingly timely.

I was a bad artist and watched close to no new movies this year. But I went to see "Hail, Caesar!" because I was in dire need of a proper night out at the movies, and this seemed like a real movie-y movie that would offer the full popcorn experience. And it did! Also, Alden Ehrenreich is a goddamn star.

Nothing resonated with me more this year than [the podcast] "Two Dope Queens." I HEART Phoebe Robinson and Jessica Williams! I like podcasts, but this felt different. It fused together some of my favorite things: comedy, politics, women and U2! I anxiously awaited each new episode and was mesmerized each week. I learned so much; I laughed out loud; and I was introduced to so many new writers and comedians. I truly think they have created something deeply funny and also super important. Consider me obsessed. Side note: Phoebe's book, "You Can't Touch My Hair," was also SO funny and beautiful and smart.

One of my favorite records to come outta 2016 would have to be the new Lydia Loveless record, "Real." She slipped me a copy of it when we played a show together this past summer. [The record has] really great songs, and she sings her ass off! I recommend this to anyone looking for a great record to give someone as a holiday gift!

"Censorship Now!!" by Ian F. Svenonius is a 2016 book that rang my bell hard. It has the joyful fury of '70s MAD magazine; they weren't kidding back then, even if it was "satire" for "kids." The essays in this book had me calling up my friends to remind them that Rome wasn't burnt in a day.

J.D. Vance, "Hillbilly Elegy." Vance grew up in the Bible Belt with a mother who struggled with addiction, and was raised by his grandmother. Through his own life story from poor, white trash to service in the military to Harvard law graduate, Vance tells the story of the Americans that we often just write off. It's the perfect continuation of Jim Goad's 1994 book, "The Redneck Manifesto" and, moreover, a compelling story about family and community values, and this conservative pride many people in middle America hold close. I wish everyone, especially now, would read this book.