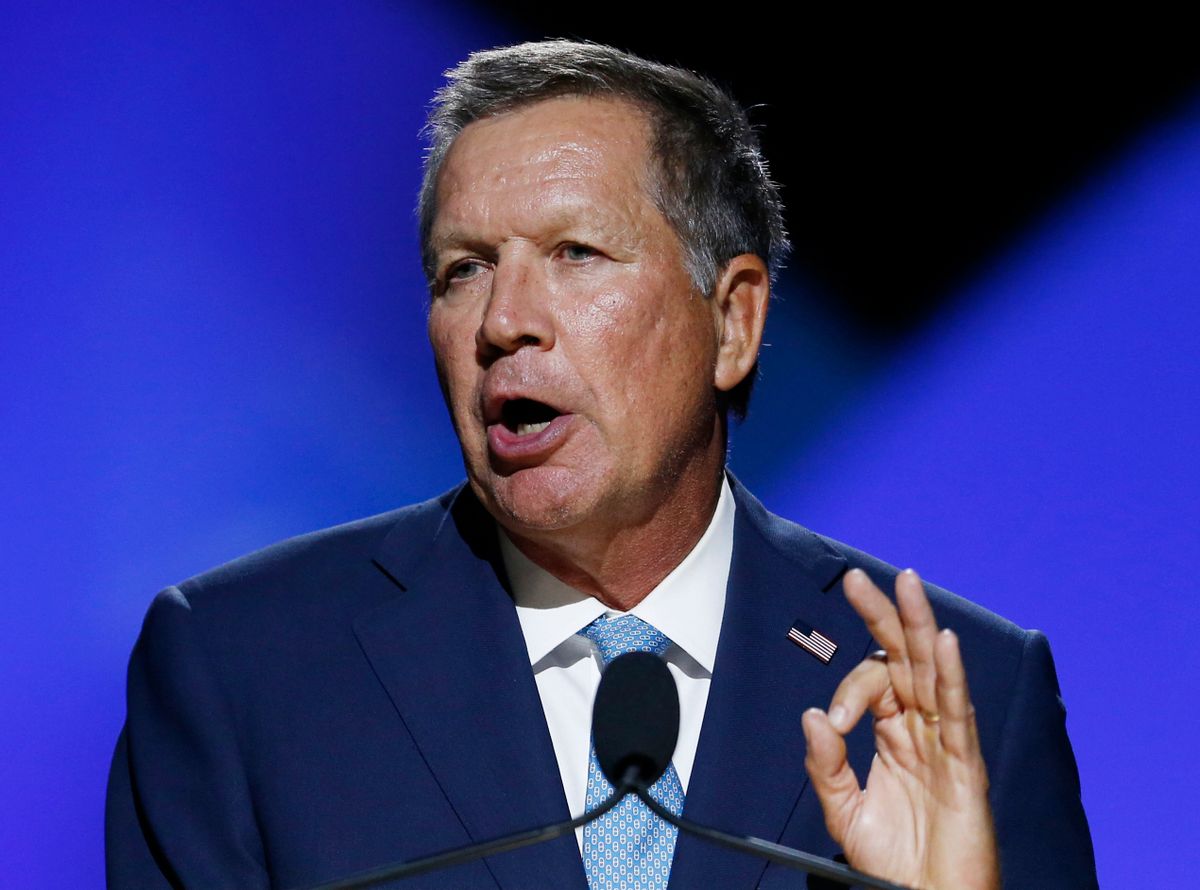 FILE - In a Sunday, July 17, 2016 file photo, Ohio Gov. John Kasich addresses the 2016 National Convention of the NAACP, in Cincinnati. Kasich says he has no idea how he'll vote come November because he doesn't support Donald Trump or Hillary Clinton. He also says he isn't sure whether Trump can win Ohio if he remains so divisive. (AP Photo/Gary Landers, File) (AP)
--

Cleveland workers and local leaders organized for months and gathered thousands of signatures to present a citywide minimum wage hike proposal for a special election in 2017. This week, however, Ohio's Republican Gov. John Kasich quietly signed a bill blocking the efforts of local citizens throughout the state, including Cleveland, to even vote on such a measure.

So much for the supposed conservative principle of localized control of government.

Without any comment, Kasich signed a bill on Monday by Ohio's Republican-controlled legislature that blocks any city or other local government in the state from raising its own minimum wage above the state’s floor of $8.10 an hour.

The Cleveland proposal, backed by the Service Employees International Union, would have allowed residents to vote in May on whether to raise their minimum to $12 by 2018 and $15 by 2021. From the Cleveland Plain-Dealer:

Perhaps most surprisingly, Kasich's move is backed by Democrats on Cleveland's City Council who called on Republicans in the state legislature to pass the ban as the minimum wage hike proposal gained steamed earlier this year.

"I've expressed my concerns to members of the General Assembly about the harm this would bring upon Cleveland's economy," Cleveland City Council Kevin Kelley recently told the Cleveland Plain-Dealer. "And I've told them I would welcome any help that the state could offer."

Raise Up Cleveland, the labor group backing the Cleveland proposal, had originally gathered enough signatures to compel the city council to introduce legislation in May seeking a $15 minimum wage that would have begun in January, but the proposal was voted down this past summer by all council members but one. Cleveland's Democratic Mayor Frank Jackson has said that he supports a minimum wage increase, but only if it comes from the state or federal government.

Earlier this year, Ohio Attorney General Mike DeWine issued an Advisory Opinion stating that Ohio law prohibits municipalities from requiring employers to pay employees an hourly minimum wage rate in excess of the statewide hourly minimum wage rate (which is fixed by Ohio’s Constitution). Still, proponents of the wage hike wanted to put the question to Cleveland voters. The bill signed by Kasich takes the issue out of the hands of voters.

The conservative American Legislative Exchange Council (ALEC) has drafted template legislation for other states to strip local voters of the ability to set their own minimum wage as the so-called Fight for $15 movement gains popularity nationwide. According to ThinkProgress, as 21 minimum wage increases were approved this year, including 14 at the local level, 20 states passed laws that preempt local governments from raising the minimum wage or requiring benefits for workers that go beyond what’s required by the state.

The last national increase to the minimum wage was in 2007.