Democrats thought they had a deal to repeal North Carolina's hateful "bathroom bill." They played themselves 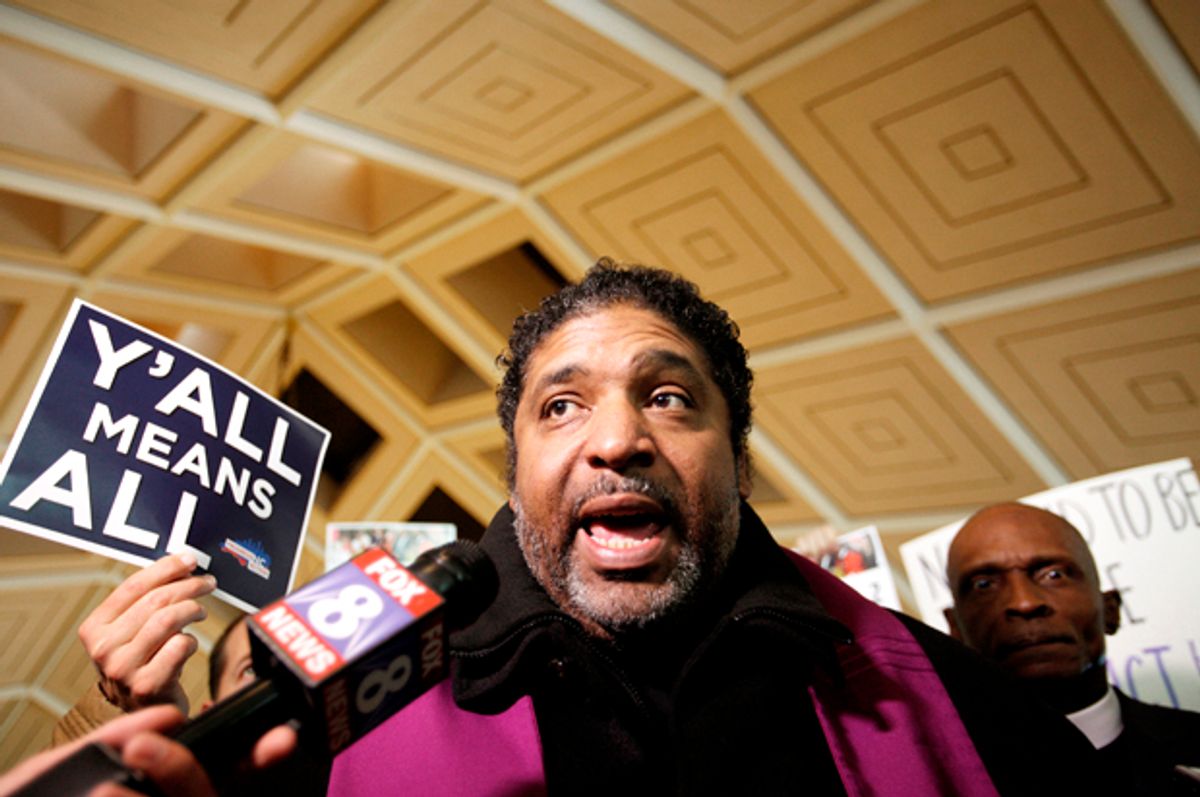 Congressional Democrats better pay attention to what's going on in North Carolina right now, with the tussle around the discriminatory "bathroom bill" known as House Bill 2. It's an object lesson in why it's so critical to resist the temptation to make deals with Republicans and instead to resist their agenda at every turn.

Republicans cannot be trusted. They are snakes in the grass and will renege on their half of the deal. Pretending otherwise, especially with a con artist in the White House — a guy who literally has a history of bamboozling people for money — is just foolishness.

To recap the bizarre happenings in North Carolina: In February, under pressure to align city law with federal guidelines, the city of Charlotte passed an ordinance including LGBT people in its nondiscrimination law. The GOP-led North Carolina legislature and Republican Gov. Pat McCrory retaliated by passing a law that not only nullifies Charlotte's anti-discrimination ordinance but also makes it illegal for trans people to use the bathroom corresponding to their gender. (Although Republicans have framed this issue as being about "protecting" girls and women, in practice, this has the ironic effect of forcing men to use the women's room.)

North Carolina faced a whole array of nationwide protests and boycotts in response to this overt bigotry and the notoriety of HB2 was clearly a factor in McCrory's losing the governor's race to Democrat Roy Cooper, in a state carried by Republican Donald Trump.

Perhaps this political fallout led Democrats to believe that Republicans meant it when they suggested that they had regrets about HB2 and were open to repealing it. Charlotte officials made what looks like it was, in retrospect, a dumb decision: agreeing to repeal the city's anti-discrimination ordinance if the legislature would in turn repeal its discriminatory bathroom law.

The deal was framed as a back-to-the-drawing-board thing, all about healing and consensus and starting over. In reality, it turned into Republicans playing the Charlotte Democrats for fools. What a surprise! Charlotte officials kept their end of the bargain by rolling back the city ordinance, but the North Carolina legislature haggled over HB2 all day on Wednesday before adjourning without even voting on any proposed repeal. Merry Christmas.

Republicans have rolled out an elaborate excuse for why they can't hold up their end of the bargain that involves some pointless quibbling over timing. It hardly matters what the excuse is, especially since so many Republicans in the state legislature seem determined to hang onto HB2, no matter what. If the excuse wasn't about the timing, it would be something else. Even if some moderate pro-business Republicans in North Carolina were willing to cut a deal, the party's far-right, anti-LGBT extremists would be only too happy to kill any such bargain.

The larger lesson here is that Republicans cannot be trusted, at least not as the party currently exists. That should already be obvious, since they elected to be president a man with a long history of not just reneging on deals but bragging about it and allegedly repeatedly hiring people to do jobs and then refusing to pay them. Republicans turned out in droves to support a man who ran a fake university set up to cheat people out of large sums of money on false pretenses. The party en masse has already made clear that it has no problem with cheating and grifting and dishonorable conduct, so long as conservatives get their way.

But for those who need more convincing, this horror show in North Carolina is a reminder that good-faith deals are impossible when dealing with the Republican Party.

This matters, because the incoming Senate minority leader, Chuck Schumer, has been running around telling the press that he's interested in considering Trump's proposed $1 trillion infrastructure deal. He really shouldn't be, as there's no chance that Trump's plan is anything but a poisonous scheme to transfer wealth from working people to the already wealthy.

It's important to read past the headlines. Schumer has also said that Senate Democrats "will certainly not sacrifice our principles just to get something done" and has specifically flagged extensive tax breaks to investors as a non-starter. It's possible that his current position is largely public posturing, meant to provide some moral authority when he decides Trump's proposal is too dirty to support.

That said, if Schumer is seriously considering making deals with Donald Trump, he needs to reconsider this immediately. As the North Carolina debacle makes clear, in the current political environment ordinary Republicans will screw Democrats over at the drop of a hat. If anything, the president-elect is even less trustworthy than his party. Leave the snakes on the ground.