Peaky blinder: We're in the age of too much television, and FX has the numbers to prove it

This year broke records in terms of the number of TV series available in the U.S. but we haven't peaked out yet. 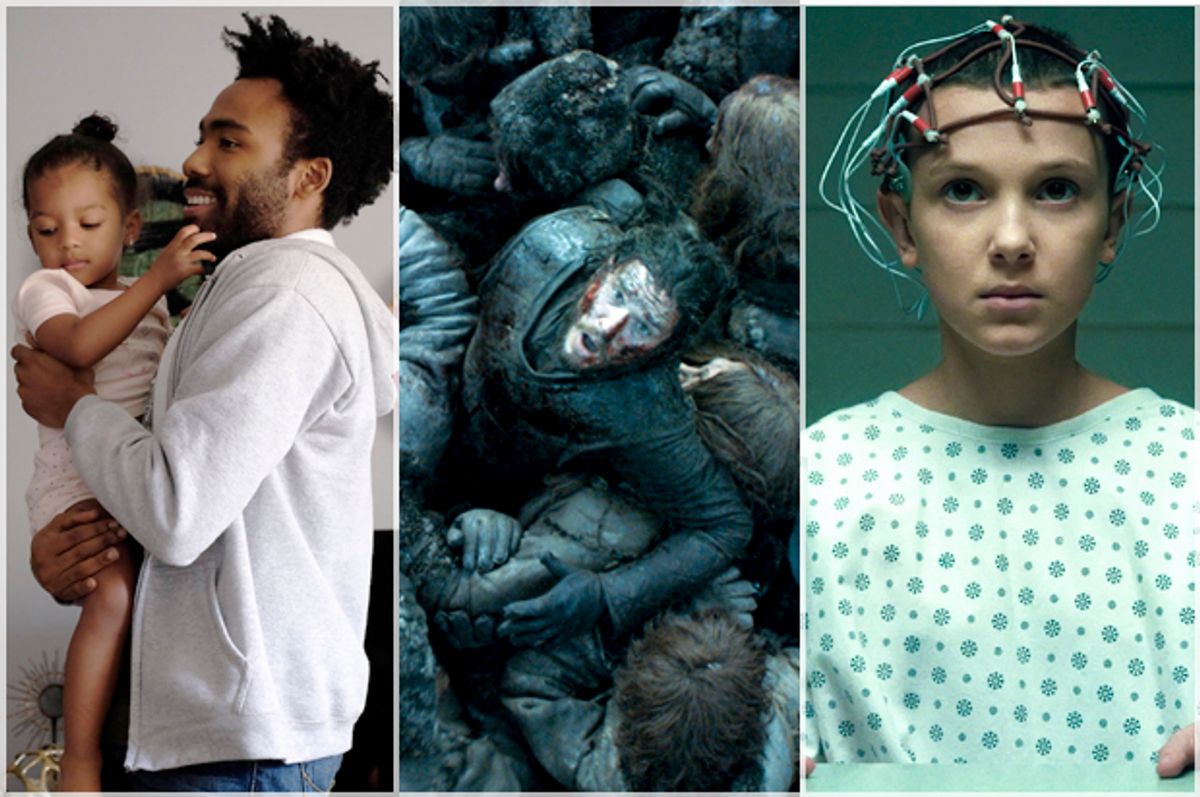 Just in time to add to the Festivus ceremony known as the Airing of Grievances — I got a lot of problems with you, TV! And now you're gonna hear about it! — FX Networks confirmed the greatest hopes and deepest fears among people who cover television for a living by letting us know there is no possible way that we can hope to see everything.

On Wednesday the cable network released its end of the year tally of original series that aired across broadcast, cable and streaming outlets during 2016. Its final estimate: 455.

That is not a misprint. Some 455 dramas and comedies were available for you to view on your way home, at your kid's ball game, while your spouse was griping about that co-worker who drives her crazy. How many of them did you watch from premiere to finale? Follow-up question: How did you possibly keep track? Because I can't, and I do this for a living.

FX Networks and FX Productions CEO John Landgraf coined the term Peak TV in 2015 while speaking to critics at the weeks-long summer industry event known as the Television Critics Association press tour. It refers to the constantly expanding universe of shows available to viewers.

Today Peak TV is the entertainment industry’s Snowpiercer, a train with a perpetual motion engine that never has to pull into a station. The engine is eternal, yes! The engine is forever!

While it’s possible for a person to have seen at least one episode of every single one of these shows — the math breaks it down to one and a quarter episodes per day, every day, with no days off — “this is simply too much television,” Landgraf told reporters in 2015, estimating there would be declines in output after this year.

In August Landgraf revised his initial prediction upward. Now he foresees the TV floodwaters beginning to decrease somewhere around 2019. Our eyes will be beads of dried-up jerky by then, but at least there’s sweet relief on the horizon — maybe.

“I’m not saying that I believe we’re in a bubble which is going to pop, causing us to go from these 500-plus scripted series to half that number,” Landgraf said over the summer. “Rather, I think we’re ballooning into a condition of oversupply, which will at some point slowly deflate perhaps from 500-plus shows to 400 or a little less than that.”

What’s the problem? Having more options is a positive development, right? Theoretically, yes. But if good is the enemy of great, a landscape that yields a lot of good options makes it tougher for true excellence to stand out and grow enough of an audience to flourish. (See "Rectify.")

Higher demand for original programming means more creators can have their work seen by the wider television audience. But – here are some of the grievances — that also means directors, producers and writers are being paid less than they were in years past, having to work more or less constantly to make a livable income. The glamorous Hollywood life is still a real thing, but most creatives grinding away in writers’ rooms and at editing consoles don’t go home to gargantuan mansions like the ones featured in Bravo shows. They’re working stiffs like the rest of us.

Increased demand hasn’t translated to a commensurate uptick in hiring for people of color and women behind the camera, either. According to a June Variety story, 80 percent of the showrunners for all new broadcast network programs are male and 90 percent are white. The stats aren’t much rosier for cable, although several acclaimed series created by women and people of color did manage to stand out in this season’s incredibly crowded field.

Landgraf made a point of creating a mandate at his network, thereby increasing the percentage of women and minority directors of FX episodes from 12 percent in the 2014-2015 television season to 51 percent this year. One its series most successful new series, “Atlanta,” has landed on nearly every major critic’s year-end best list. As part of his Peak TV speech, FX’s CEO mentioned that the end result would be a greater emphasis on branding. The network’s tally of these numbers then is as much of a savvy strategic move as a Christmas gift to TV lovers.

Here’s the full eye-popper of a chart included with Wednesday's press release, courtesy of courtesy of FX Networks Research (click to enlarge):