He sees you when you're sleeping! Thanks to one great leader and his warriors, "War on Christmas" ends in victory 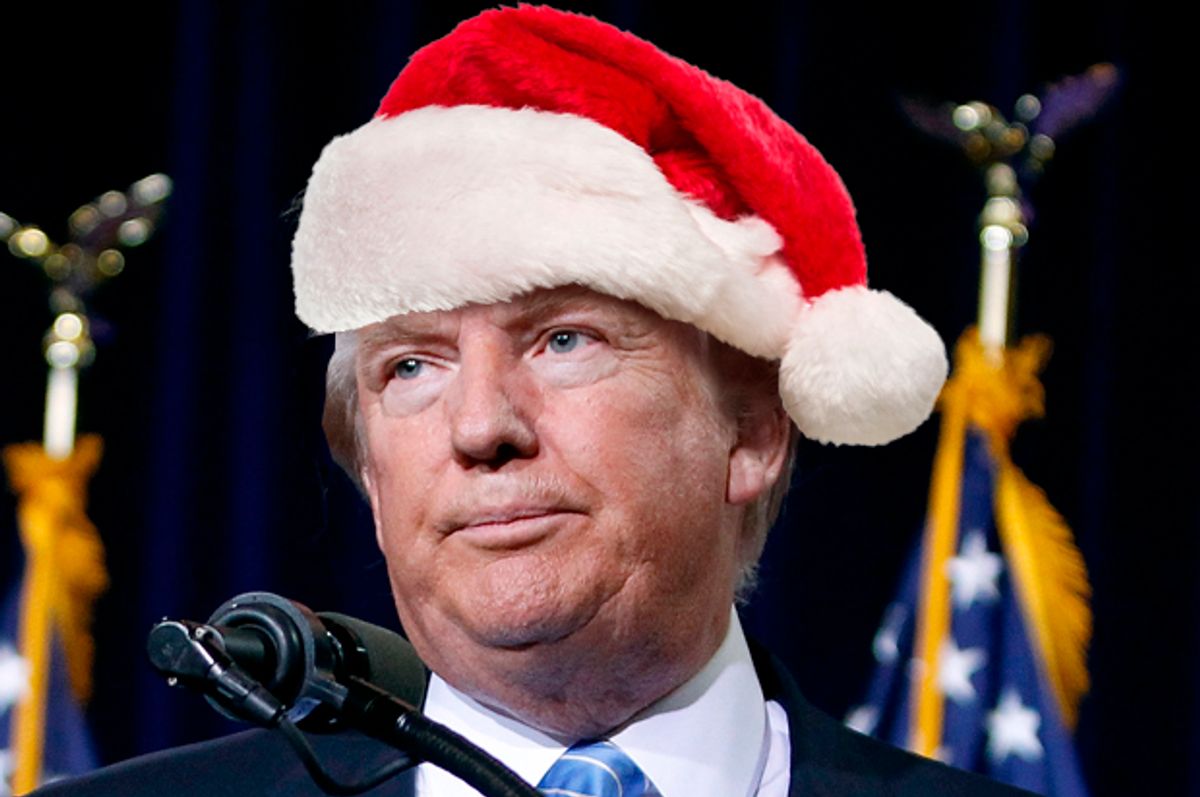 The holiday season is usually a joyful time when most of us get together with family, eat a lot of fattening food, watch football, take some time off work and celebrate the religious ceremonies of our choice. This year promises to be a little bit less enjoyable for many of us, due to the recent "unpleasantness" I probably don't need to spell out. There are good reasons to be depressed but I won't go into that now because there is good news to share that will make the season a little bit brighter. The "War on Christmas" is finally over.

V.C. Day was officially declared this week by Bill "Santa's General" O'Reilly, the man who led the fight:

You may remember about 10 years ago, “The O’Reilly Factor” began spotlighting companies that refused to say the words "Merry Christmas." In fact, some of those businesses actually ordered their employees not to say that. Well, that culture war issue ignited.

Most companies stopped the nonsense and "Merry Christmas" became a common greeting once again. For me, it was interesting to go through that, because some on the far left actually denied there was any controversy at all and claimed that I fabricated it. More lies from a crew that is incapable of telling the truth.

Commander Newt "Zuzu Petals" Gingrich fought bravely by O'Reilly's side for years, relentlessly attacking the government forces who were banning all federal employees from saying "Merry Christmas" — well, banning them from using federal money to send their personal Christmas cards anyway, which, of course, is exactly the same thing.

And Sgt. Denny Hastert, the former speaker of the House and current inmate at a Minnesota federal prison, won one of the earliest and most important battles of the war by making it a steadfast rule that the U.S. Capitol tree be referred to only as a Christmas tree, not a "holiday tree." There are some who say that early victory sustained the troops through the hard years that followed.

Gen. O'Reilly and the rest of the far right fought a trench war for a decade, getting nowhere as the secularists insisted on banning "Merry Christmas" and forcing everyone in America to regurgitate the hated words "Happy holidays" instead. And then a true leader emerged, a man so strong, so powerful, so magical that like a superhero he was able to win the war pretty much single-handedly. That man, of course, is President-elect Donald Trump.

As his former campaign manager, CNN commentator and newly minted lobbyist Corey Lewandowski declared on Sean Hannity's Fox News show, "You can say again 'Merry Christmas' because Donald Trump is now the president. You can say it again. It's OK to say."

At Trump's Michigan rally he took it even farther and declared that all those department stores that refuse to celebrate Christmas are going to toe the line from now on:

But like those lone Japanese soldiers found still carrying on the fight on islands years after the end of World War II, some grizzled "War on Christmas" veterans are still skirmishing. Members of the Breitbart Brigade are still battling a few stray secularists who they say have moved "beyond opposition to Nativity scenes and Wise Men to denying the very existence of Jesus." If that catches on, the fragile peace could be broken and everyone will once again be racing through department stores, knocking over Christmas trees, shrieking, "Happy Holidays!" and spitting on Santa. (They never thank him for his service.)

Those holiday haters will be met with fierce resistance if they try. Trump's Christmas army is prepared to do whatever it takes to secure the right to say, "Merry Christmas" in America again. For instance, there are brave soldiers like the mayor's chief of staff in Mobile, Alabama, who went the extra mile to honor his leader the way he most wanted to be honored, with a Christmas tree.

But chief of staff knew that just going to a corner tree lot would not suffice. The great Donald Trump would need a yuuuge tree, a beautiful tree, a special tree. So this good man went above and beyond the call of duty and had an old-growth evergreen in one of Mobile's public parks cut down to use as a prop for Trump's Christmas victory rally.

Some anti-Christmas crusaders were unhappy, of course, and the good soldier had to offer up an apology. But being the hero he is he made sure that everyone could see that his confession was forced:

I accept full responsibility for having this done. For this, I sincerely apologize. Going forward, I will be more sensitive to the spectrum of concerns regarding trees.

One can imagine him defiantly blinking, "Merry Christmas" in Morse code as he said it.

The good news is that war is over, if you want it, America. Happy Holidays, everyone. And now that we are finally free at last, Merry Christmas, too.