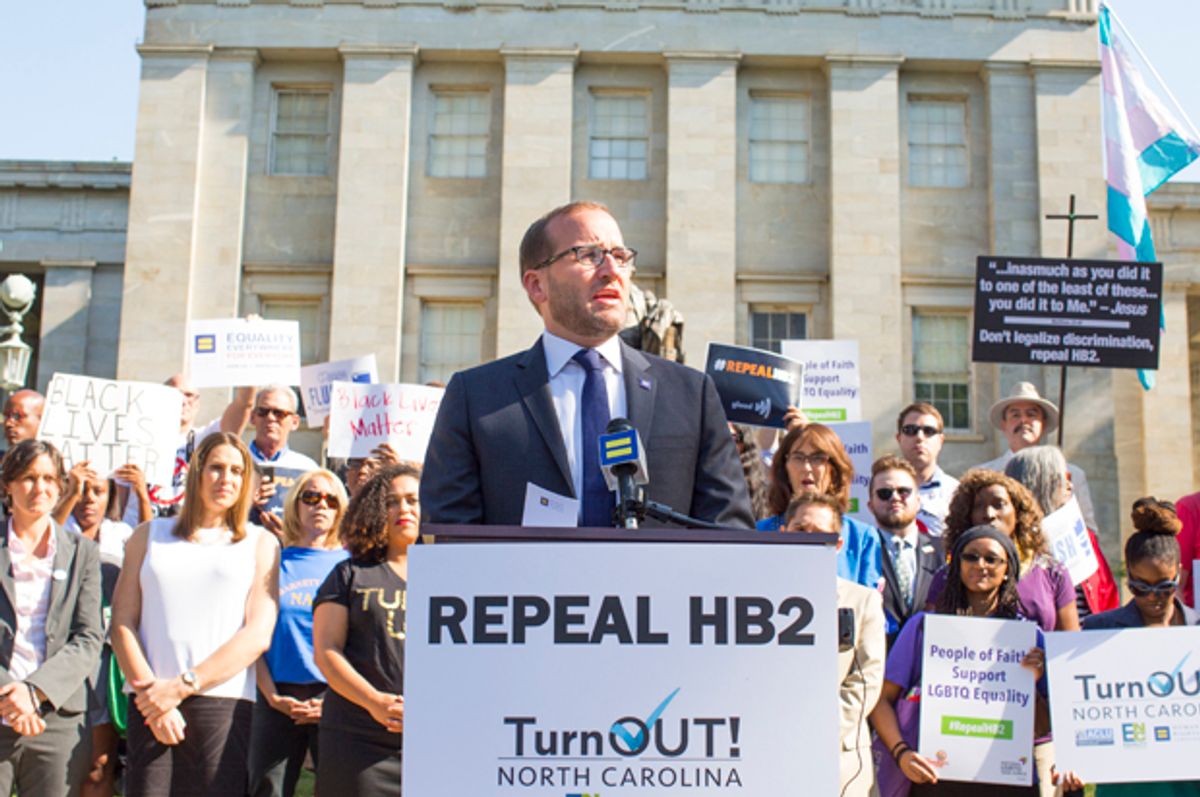 The Republican-led North Carolina legislature adjourned a special session on Wednesday evening without voting on a full repeal of the controversial "bathroom bill," HB2. That repeal was expected to follow the surprise repeal of a nondiscrimination ordinance in Charlotte, the state's largest city, earlier this week.

After deliberating all morning and into the afternoon in a closed caucus session, Republican lawmakers finally emerged with a bill to repeal HB2, which has become nationally infamous as a symbol of regressive anti-LGBT legislation. But Republicans hold supermajorities in both chambers of the North Carolina legislature, so perhaps it's not surprising that their repeal bill came with a catch: Local municipalities are barred from passing any laws related to employment or public accommodations for six months. Even that semblance of a deal is already falling apart, as hardline Republicans who supported the original version of HB2 still refuse to support even a partial repeal.

The GOP's insistence that it impose restrictions on local governments angered many Democrats in the state legislature, who had hoped a good faith effort earlier this week by the Charlotte City Council would secure a full repeal of HB2. The council voted unanimously Monday to repeal Charlotte's citywide nondiscrimination ordinance enabling transgender people to use the bathroom that corresponds to their gender identity.

It was Charlotte's nondiscrimination efforts that caused outgoing Republican governor Pat McCrory, a former Charlotte mayor, to champion HB2. The controversial law was passed in a special session called after McCrory criticized Charlotte's antidiscrimination ordinance as "government overreach." McCrory made HB2 -- which also prohibits cities in North Carolina from raising the minimum wage -- a central focus of his failed re-election campaign.

On Monday, North Carolina Attorney General Roy Cooper -- also the governor-elect who ousted McCrory in the November election -- brokered an agreement by which both the city of Charlotte and the state of North Carolina were rescind their respective legislation. Charlotte rescinded its ordinance in full, not contingent upon HB2's repeal, early Wednesday.  The “six-month cooling-off period" in a bill introduced by Republican Sen. Phil Berger late Wednesday afternoon, however, was not part of the deal. The proposed bill reads in part:

Six Month Cooling-Off Period. -- No local government in this State may enact or amend an ordinance regulating employment practices or regulating public accommodations or access to restrooms, showers, or changing facilities.

"We don't know what the consequences of this moratorium will be," Democratic Sen. Jane Smith said on the floor during debate Wednesday. Berger argued that a continued ban on local municipalities passing certain measures is needed because Democrats and LGBT rights activists "have been saying as soon as HB2 is repealed they will work with other local governments [to pass new ordinances]."

“Charlotte acted in good faith that we would keep our part of the bargain," Sen. Jeff Jackson of Charlotte, said on the Senate floor. Republicans later returned with an amendment to their bill banning municipalities from passing non-discrimination policies to the end of the 2017 legislative session plus 30 days.

Meanwhile, the North Carolina House passed a special joint resolution calling for the special session to be adjourned without a repeal of HB2. House Rules Chairman David Lewis told the Charlotte Observer that there weren’t enough members of the GOP caucus who supported a repeal of HB2. Republicans in Raleigh have been holding meetings on HB2 for two days now.

For their part, Democrats and LGBT activists are enraged that Republicans have reneged on their promise to repeal the discriminatory bill in full:

The next time the North Carolina legislature is expected to reconvene is in 2017.