Donald Trump and the libertarians: Why have so many people who claim to love freedom embraced a strongman? 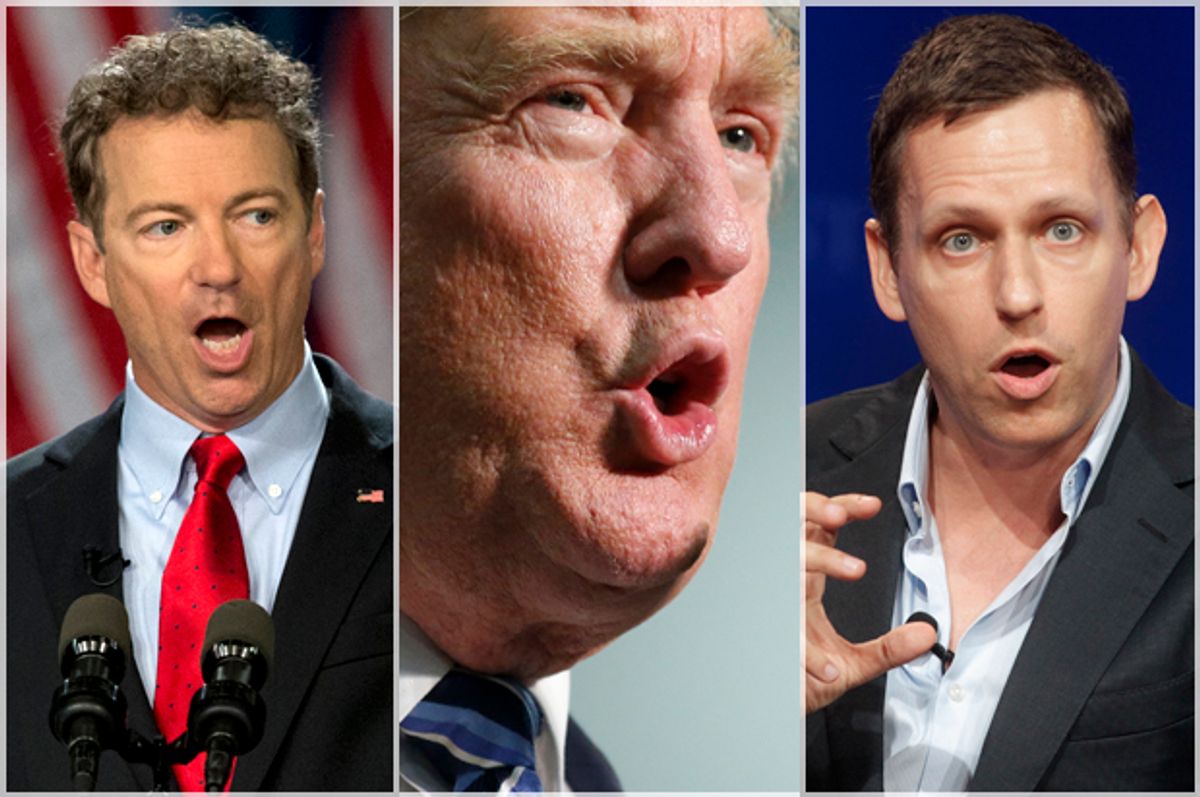 Of all the bizarre and contradictory aspects of Donald Trump’s political rise, one of the strangest has been the billionaire populist’s puzzling relationship with America’s libertarian movement.

Though President-elect Trump doesn’t appear to have any discernible political philosophy (if anything, Trump's ego is his ideology), it's safe to say that he is one of the most blatantly authoritarian politicians in American history. One would expect freedom-obsessed libertarians to be his natural enemies.

Some of the more ideologically committed and intellectually honest libertarians have been just that. In a recent article in Reason magazine, Nick Gillespie argues that American libertarians — not the “sorry lot” of Democrats — will put up the real resistance against Trumpism. Referring to a Politico article by Katie Glueck, Gillespie points out that libertarian-leaning Republicans in Congress have been among Trump’s most vocal critics — including Sen. Rand Paul of Kentucky, who has promised to oppose neoconservative John Bolton for any position in Trump’s State Department, and Rep. Justin Amash of Michigan, who has been critical of Trump’s numerous authoritarian tendencies.

But Trump’s relationship with libertarians is not as clear-cut as Gillespie claims. Indeed, for every self-proclaimed libertarian who opposes the billionaire, there seems to be a diehard Trumper who identifies (or previously identified) as a libertarian. Both radio host Alex Jones and his Infowars colleague Paul Joseph Watson, for example, have called themselves libertarian over the years. Yet during the 2016 campaign both became hardline Trump partisans. (Watson said on Twitter a few months ago that he no longer identifies as a libertarian because Gary Johnson “made the term an embarrassment.”)

Four years before Trump became a political sensation, Jones and Watson were both supporters of Ron Paul — as were many other Trumpers and alt-right activists of today, including the infamous white supremacist Richard Spencer. Matthew Sheffield documents this trend of former Ron Paul libertarians morphing into Trump supporters in his Salon article on the history of the alt-right:

While future neo-Nazi Richard Spencer was struggling with white nationalism in the world of political journalism, most of the people who would later comprise the alt-right’s online shock troops were involved in a different venture. They were fighting hard to make former Texas congressman Ron Paul the Republican presidential nominee, first in 2008 and again in 2012. It’s more than uncanny how many current alt-right leaders backed the former Texas congressman in his quixotic bids to stop GOP mainstream candidates John McCain and Mitt Romney.

Then, of course, there’s Silicon Valley billionaire Peter Thiel, who supported Paul in 2012 with millions of dollars in campaign contributions. Thiel — who identifies as a libertarian, and is a huge fan of Ayn Rand — is now one of Trump’s closest confidants, and is beloved by many on the alt-right (particularly by its “neo-reactionary” faction).

This trend cannot be mere coincidence. While the more ideologically committed libertarians have remained averse to Trump and his authoritarianism, many others who previously espoused the non-aggression principle have fully embraced him as their strongman. What’s going on here?

A 2013 survey from the Public Religion Research Institute provides some insight. “Compared to the general population,” observe the researchers, “libertarians are significantly more likely to be non-Hispanic white, male, and young. Nearly all libertarians are non-Hispanic whites (94%), more than two-thirds (68%) are men, and more than 6-in-10 (62%) are under the age of 50.”

In other words, if you’re a libertarian, chances are you’re a youngish white guy.

Of course, the same is true for those who identify with the alt-right, which is a big-tent movement whose different factions are ultimately united by their white male identity and their collective love for the Donald (as well as their hatred of "Social Justice Warriors," or SJWs). The alt-right isn’t full of former Ron Paul fans because Paul and Trump share the same ideology. If that were the main appeal, those people would have flocked to Paul’s son — who is, per Gillespie's article, currently forming the libertarian resistance against Trump. It's happening because both politicians appealed to the reactionary impulses of white men who feel as though they’ve been wronged by modernity.

Within the alt-right, the consensus is that the sinister forces of feminism, multiculturalism, globalism and political correctness are turning white men into emasculated “beta cucks,” while at the same time undermining and destroying Western civilization — which, for white supremacists like Spencer, is synonymous with white ethnicity.

While the white supremacist factions are primarily focused on combating multiculturalism and globalism and promoting their racialist agenda, other alt-righters simply identify with the movement because they feel persecuted (as white males) by feminists and SJWs who have made it impossible for them to get laid and be their dominant alpha-male selves. (It is much easier to blame feminists and women in general for one’s involuntary celibacy than to look in the mirror.)

As Aja Romano reported last week in Vox, many young white men were first introduced to the alt-right through their involvement in various self-help communities, including the notoriously misogynistic "pickup artist" community, and were later indoctrinated and radicalized by their white supremacist comrades.

On the surface, it is hard to see how the white identity politics and sexism of the alt-right relates at all to the free-market fundamentalism of libertarianism, or how a man with no discernible ideology like Donald Trump could appeal to the former disciples of a committed ideologue like Ron Paul. But when you start to unpack what made Paul’s libertarianism so alluring to young white men in the first place, it all starts to make sense.

In 2015, Kevin Drum of Mother Jones put forward a hypothesis about why libertarianism has proven to be so appealing to white men:

Hardcore libertarianism is a fantasy. It's a fantasy where the strongest and most self-reliant folks end up at the top of the heap, and a fair number of men share the fantasy that they are these folks. They believe they've been held back by rules and regulations designed to help the weak, and in a libertarian culture their talents would be obvious and they'd naturally rise to positions of power and influence.

That sounds about right. The free-market utopia that libertarians advocate looks and sounds a lot like the unfettered capitalism of the Gilded Age -- before the government started getting involved in everything from regulating private industry and providing a safety net for the poor and elderly, to supporting worker rights and combating discrimination, to cracking down on the persecution of African-Americans in the South.

This golden age of capitalism was also a time when white men ruled the world and dominated the “fairer sex” — in other words, when both white privilege and male privilege were at their apex. Over the past century, as the state has become more involved in leveling the playing field, white male privilege has slowly but surely begun to erode, while — from the perspective of young malcontents reading “The Fountainhead” for the 10th time — the weak and parasitic members of society have been able to thrive and the Howard Roarks of the world have become marginalized and ignored.

In his now-notorious 2009 essay, Peter Thiel opined that freedom and democracy were incompatible, and then bemoaned how “the vast increase in welfare beneficiaries and the extension of the franchise to women” had ruined the political prospects of libertarianism. This kind of reactionary nostalgia for the past is ultimately what makes both libertarianism and alt-rightism so seductive to young white males — particularly white males who feel persecuted by the modern age.

Of course, white men are not being persecuted in modern America, and one popular maxim helps explain this kind of mentality: “When you’re accustomed to privilege, equality feels like oppression.”

As women and people of color rise in stature and fight to overcome historical inequities and biases, many white men feel like they are — to borrow the words of the president-elect — being treated very unfairly. Of course, many white men are being treated unfairly (along with all other groups of people) by our neoliberal economy and the corporate state. All working-class and middle-class Americans have suffered from stagnating wages and growing inequality over the past four decades. But there has also been great social progress for women, people of color and the LGBT community.

So even though economic prospects have declined for the vast majority, there has been much to celebrate if you’re a member of a historically disadvantaged group (even if there is still a long way to go). Meanwhile, while many white men have seen their economic prospects decline, they have also felt their privilege begin to wither, even if they weren’t fully aware of this privilege to begin with (because equality can feel like oppression).

This may be especially true for some young white men, who, like all other young Americans, face a bleak economic future. Unfortunately, many have embraced Donald Trump as their strongman in hopes that he will “Make America Great Again.” If he can’t make the economy work for the middle class again, perhaps he will restore some white male privilege — or, as an alt-right troll might say, at least he’s not a globalist cuck.

In the months and years ahead, ideologically committed libertarians will probably become reliable allies for the left when it comes to combating the authoritarianism of Trump. But liberals and leftists should keep in mind that libertarianism shares many of the same reactionary impulses of the alt-right, and that many former libertarians are today Trump's biggest fans.