Kid Rock and Ted Nugent are good to go! Trump's star-free inaugural may mark a new low in celebrity culture 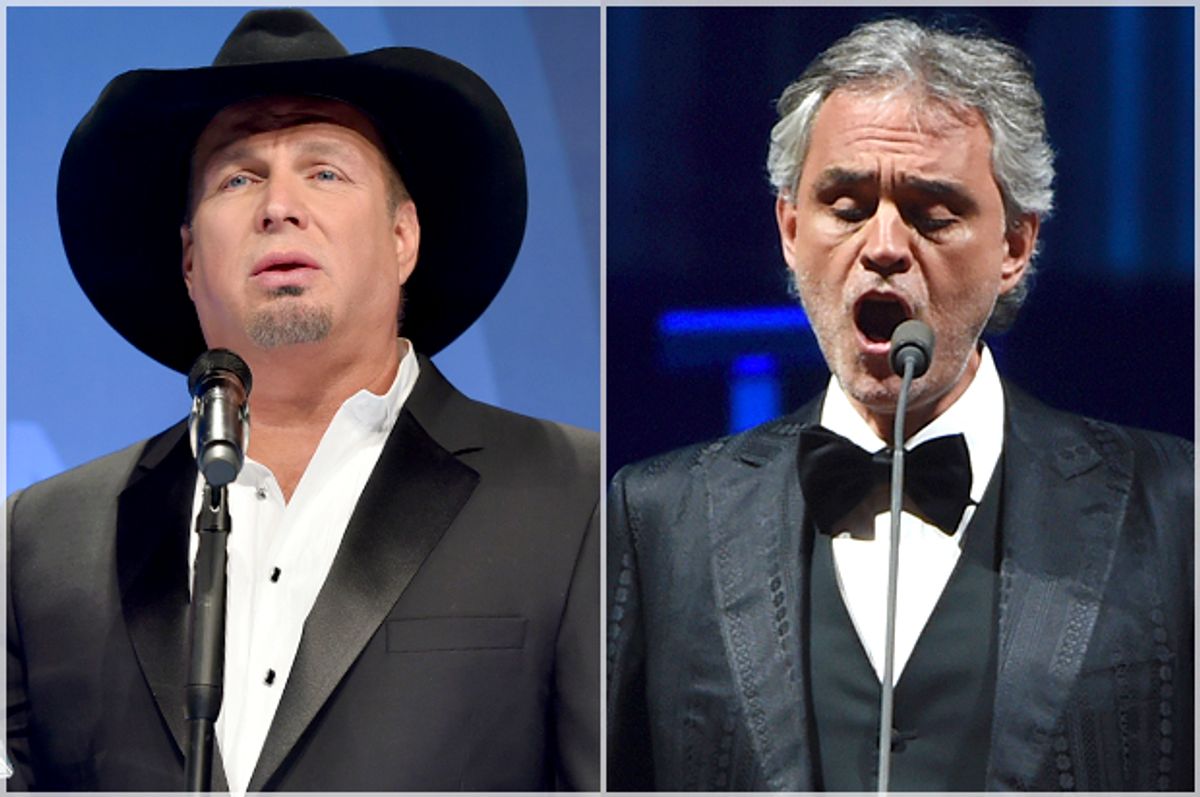 He has not yet taken office, but Donald Trump's administration are already facing its first major crisis: finding performers for next month’s inaugural festivities.

The Wrap had the details:

Donald Trump is so displeased with his team’s inability to lock in A-list talent for his inauguration events next month that he’s ordered a “Hail Mary” shakeup of his recruiters to try to book performers. . . .

The Trump transition has been struggling for weeks to secure A-list talent for the inauguration celebration. . . .

Performers who are known to have rejected requests include Elton John, country singer Garth Brooks and opera star Andrea Bocelli.

Other outlets have reported that officials have taken to dangling ambassadorships in front of talent bookers if they can deliver A-listers to perform at the inauguration. For all of that, as of Thursday the list of the talent scheduled read like a who’s who of angry, washed-up wingnut musicians (Ted Nugent and Kid Rock) and acts last seen performing at the Macy’s Thanksgiving Day Parade (the Mormon Tabernacle Choir, the Rockettes, a runner-up from season 5 of “America’s Got Talent”).

The Trump team has taken to spinning this story by either denying it or claiming that the president-elect himself doesn’t care. That's about as believable as his plan for replacing Obamacare with something better. Trump loves a spectacle. Even before he wrapped up the Republican nomination, he was trashing the party’s “boring” 2012 convention to the media and promising to give this year’s a real “showbiz” feel. We can be certain that with his immense ego and bottomless need for validation, he would like his inauguration to be the yuuugest, glitziest celebration that Washington has ever seen.

Trump has spent most of his adult life pushing his own brand of celebrity while seeking the favor and approval of other famous people. Trump watchers have long reported that it burns him up that members of the old-money elite of Manhattan have always looked down on the flashy, garish outer-borough goombah who plasters his name on everything. Or that New York banks long ago stopped lending him money. In some ways, he is still the thin-skinned kid who left Queens to expand his family’s real estate empire into the glitzy world of Manhattan, only to have that world continue to sniff at him.

In fact, President Brack Obama’s humiliation of Trump in front of a room full of A-list Hollywood stars at the 2011 White House Correspondents’ Dinner is reportedly a big reason he sought the presidency in the first place. Which brings us to the second bit of Washington-Hollywood-related news from Thursday: a report that a couple of board members of theWhite House Correspondents' Association Dinner are worried about the event’s viability under the new president:

Does Trump even come? After all, he should associate the affair with public humiliation. In 2011, he sat red-faced and uncomfortable, front and center, as both President Obama and comic Seth Meyers skewered him. . . .

Or does a man well-attuned to ratings, circulation and media revenue decide to come precisely because the ratings and coverage would overwhelm any previous dinner?

There has long been a symbiosis between Washington and Hollywood that lent the former a veneer of glitz and the latter a measure of seriousness that it would otherwise be hard-pressed to show. It is an arrangement that has earned a fair share of criticism for the self-important displays like the correspondents' dinner that are often the result.

Trump is the apotheosis of the interaction between the two most visible areas of American culture — a reality-TV star who has made a ton of money off of Hollywood, mostly through “The Apprentice,” who now will set foreign and domestic policy while representing the nation to the rest of the planet.

And yet, for the moment most of Hollywood wants nothing to do with him. These people who have long looked on him as the loudest clown in the circus still don’t respect him and, in some cases, have actively spoken out against him. It must gall him that the one thing he has ever been genuinely good at — being a celebrity — is not correlated with his securing the loyalty of big-time celebrity figures now that he has won the presidency.

Perhaps those A-list stars who are boycotting his inauguration will also boycott the correspondents' dinner, turning it back to its origins as a quiet evening that no one outside the Beltway cared about. More broadly, if the biggest celebrity ever to become president finds himself utterly deserted by other celebrities, it might finally reveal the Washington-Hollywood axis for the empty spectacle it has long been and in the process kill it for at least the next four years. That at least would be a worthy, if ironic, legacy for Trump to leave behind.