What's with all the suits? 7 strange facts about Donald Trump's personality

The country-wrecking ideas and policies are bad enough, but what's with the creepy quirks? 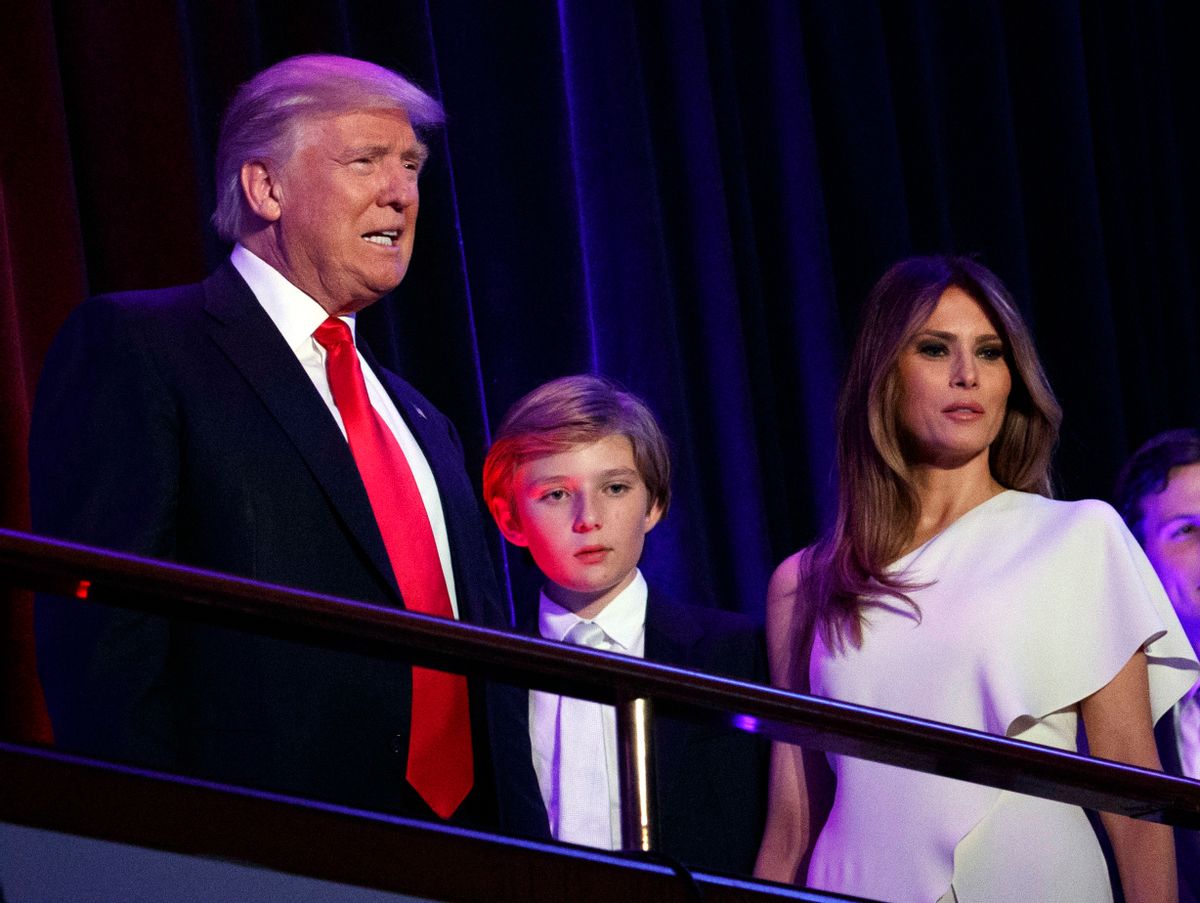 FILE - In this Nov. 9, 2016, file photo, President-elect Donald Trump, left, arrives to speak at an election night rally with his son Barron and wife Melania, in New York. Breaking with tradition, Donald Trump will move into the White House after the inauguration while wife Melania and 10-year-old son Barron plan to remain in New York City until at least the end of the school year. (AP Photo/Evan Vucci, File) (AP)
--

Senator Al Franken, who formerly made his living in comedy, recently made a weirdly unsettling observation about Donald Trump. He never seems to laugh. And it’s true. The New York Times reporter to whom Franken made the comment did some research, observing Trump at events where normal people tend to crack up, like the Al Smith Dinner. Though Trump smiles, he never seems to laugh.

“I don't know what it is,” Franken said.

We don’t either, but it’s creepy.

An abundance of pieces have been written about Donald Trump’s malignantly narcissistic personality, his lack of impulse control, his gnat-like attention span on any topic but his own fabulousness, his ability to lie and the fact that he's a racist, sexist bully who may also be fairly unintelligent.

But he also has some weird and disturbing personality tics that are less frequently mentioned, but which nonetheless give us the heebie jeebies.

1. He has never done drugs.

Trump has never smoked a cigarette or had an alcoholic drink. All respect for those who have had an addiction problem, or decided to abstain after some time as a drinker, or who simply don't like alcohol — but never to have tried a mind-altering substance of any kind is just not normal. It also shows a lack of curiosity and a fear of losing control.

Trump has said the alcoholism and early death of his older brother turned him into a life-long teetotaler, and maybe that is true. He won’t even have a cup of coffee. Seriously, who does that? That’s not normal.

He has also said in many interviews that his biggest piece of advice for his kids when they were growing up was not to do drugs. Really, that’s it, dad? That’s all you’ve got?

Of course, Trump has tried to cash in on other people’s drinking habits with Trump vodka, which failed.

2. He’s a germophobe in the extreme.

Trump has called the practice of shaking hands “barbaric." He won’t shake hands with his children’s teachers because teachers are in touch with too many germy kids. Then again, it’s hard to imagine he has attended too many parent-teacher conferences. Teaching children, after all, is germy women’s work.

His germophobia is such that he is unwilling to push ground-floor elevator buttons because they have been touched by too many people (the masses).

Perhaps on the belief that it distances him from germs, he drinks with a straw and eats pizza with a fork, which is fine if you’re from Chicago, but definitely not New York. He even explains his penchant for fast food in terms of what he imagines to be its cleanliness. “I’m a very clean person,” he told Anderson Cooper on the campaign trail. “I like cleanliness, and I think you’re better off going there than maybe someplace that you have no idea where the food’s coming from. It’s a certain standard.”

He has spoken about how he loves to wash his hands, and does it as much as possible. (Here’s a theory: Maybe his hands got so tiny from all the washing. He wore them away.)

He has openly boasted about never changing a diaper on any of his five kids, probably as a result of his germophobia, plus sexism and wealth.

Some have speculated that Trump’s germophobia and anti-immigration stances are related, since he sees immigrants as potential carriers of disease. But really, all the unwashed masses are carriers of disease for Trump, so he must stay in his high tower.

3. When he does shake hands, he does it in a very weird way.

Whenever possible, Trump avoids shaking hands. When he absolutely has to shake someone's hand, he has a weird habit of aggressively pulling the person in close to him, so that the person practically has to hug him. When the fellow (it is usually a fellow) offers any resistance, the whole dance can become a fairly awkward arm-wrestling match.

No word on whether Trump pops a Tic-Tac before pulling the person in closer than they would really like to be.

4. He has a 10-year-old’s mentality about bodily functions.

Especially the notion that women have bodily functions. He has made weird comments in interviews about being blissfully unaware of whether his wife Melania has ever used the toilet. And when Hillary Clinton had to use the ladies room (at least, we think that’s where she went) before a debate, he called it “disgusting.” He used the same word about a female lawyer who needed to excuse herself to pump breast milk to feed her infant. That is not what Trump seems to think breasts are for and he finds it repellent.

Ten is the age Melania Trump suggested Trump acts sometimes, and that was part of her explanation to Anderson Cooper about why Trump bragged to Billy Bush that women just let him “grab them by the pussy.” Melania knows what 10-year-olds are like, since her son Barron is also 10.

Trump will be the first president in 150 years not to have a pet, if you count James Polk’s horses. It does not even appear that Trump likes animals much, if his family's enthusiasm for trophy hunting is any indication.

He has been publicly criticized by the Humane Society of the United States for having cozy relationships with anti-animal welfare zealots who rake in profits from puppy mills, agribusiness, trophy hunting, factory farming and horse slaughterhouses.

Being a self-confessed clean-hands freak may be part of the reason Trump dislikes animals, and certainly his run-in with a bald eagle did not help warm him up to animals. Recent science has shown that caring for animals is a big part of what teaches us empathy, since domesticated animals are completely dependent on human beings.

6. He has bizarre ideas about exercise and sleep.

We already know that Trump does not have much regard for science as he gears up to gut climate change mitigation and voices the view that vaccines might cause autism. But he also does not hold much stock in basic common sense or the recommendation of health professionals.

The fast-food-loving germophobe-in-chief also has some notion that exercise is bad for you. This may be based on some theory that the human body is like a battery, and if you use up the energy it’s all gone, or because he has had friends who have needed knee surgery because of working out. Trump also tends to latch onto one example and overgeneralize: If there is a cold day he thinks climate change is a hoax, and if someone he knows had a cute baby after considering an abortion, it means all women should be punished for having abortions.

Trump also seems to think that needing sleep shows weakness, and claims only to sleep three or four hours a night, which leaves him plenty of time to tweet at people who have affronted him.

“I’m a guy who lies awake and thinks and plots,” he told New York magazine in 1992, somewhat terrifyingly. Among the things he likes to plot, he said, are revenge strategies. Adequate sleep is tied to mental health, and what Trump expressed smacks more than a little of paranoid tendencies, but don’t take it from us. Three professors of psychiatry are also concerned about Trump’s mental fitness to be president.

Trump is never seen in anything but a suit, and since he doesn’t sleep much, he probably doesn’t even don silk pajamas at night, a la Hugh Hefner.

A suit is fitting attire for a businessman, but he reportedly also violently demanded that his college-age son wear a suit to a baseball game by one account. Donald Jr.’s college dorm mate recounted the story on Facebook during the campaign. "Don Jr. opened the door, wearing a Yankee jersey,” Scott Melker, now a Florida Realtor, wrote. “Without saying a word, his father slapped him across the face, knocking him to the floor in front of all of his classmates. He simply said 'put on a suit and meet me outside,' and closed the door."

Don Jr. was a freshman at the time, and yes, they were going to a Yankees game.

None of the Trump sons have been seen in anything but suits ever since, except when big-game hunting in Africa. Ten-year-old Baron is sometimes seen in a polo shirt, though even he is often seen in a suit, which is weird.