How Teen Vogue has transformed for a smarter, bolder and more stylish age

Teen girls are demanding smarter media; Teen Vogue is the only one listening 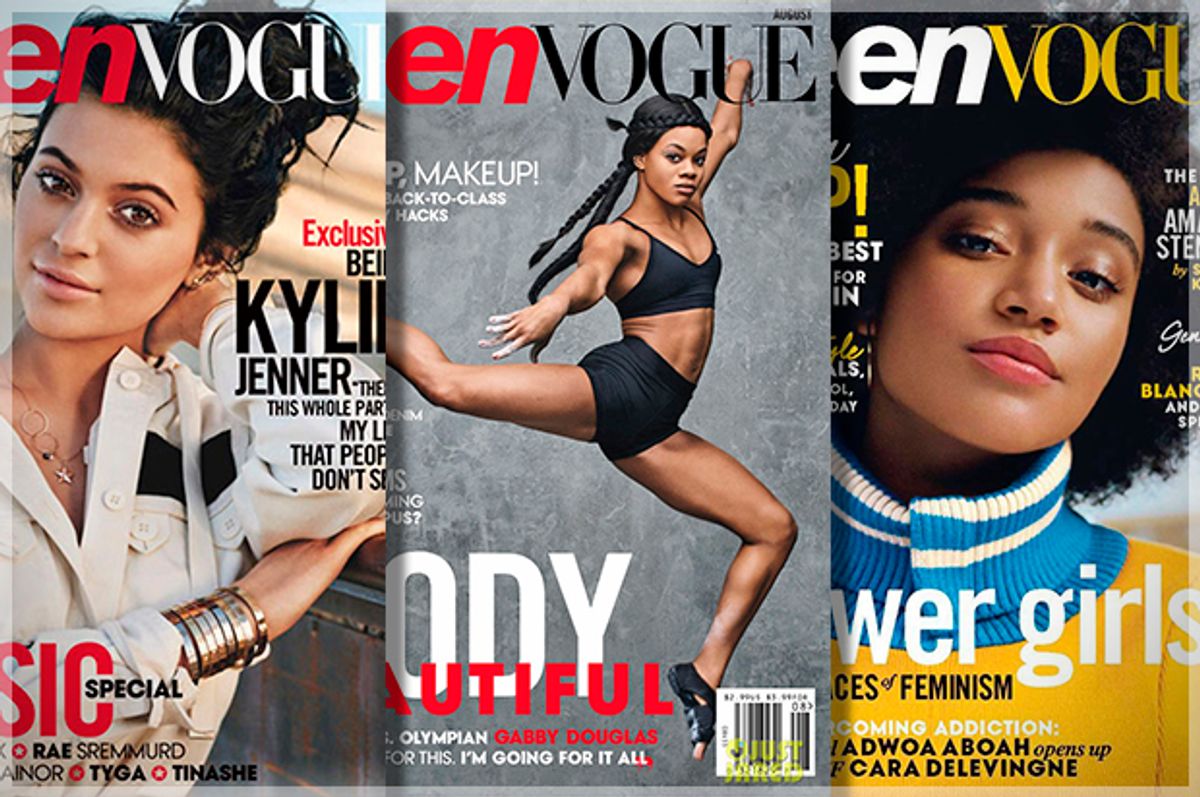 If one wanted to read a conversation between, say, feminist icon Gloria Steinem and rising actress/activist Amandla Stenberg, one might flip through the archives of The New Yorker or Dame. Certainly no one would look to a publication whose cover once touted “Meet ‘Glee’s’ Sexiest New Bad Boy!” or “Win a Designer Prom Dress!” -- and yet, turn to the centerfold of the September 2016 edition of Teen Vogue, and Gloria and Amandla will greet you with their bright smiles and poignant politics.

More recently, Teen Vogue has risen to the media’s attention for a controversial article penned by writer Lauren Duca. The 1,200-word piece is a searing takedown of Donald Trump, and an analysis of the threats his potential policies pose to young women. The sharply written article urges its readers to transform their anger into action, and to seek truth in the age of fake news and hyperbole. What’s most striking, though, is the fact that Duca’s piece is a more to-the-point political analysis than has been published by The New York Times, CNN, or TIME in the wake of the election (on the same day Duca’s article was published, TIME shared the enlightening feature “Do You Eat Like a Republican or a Democrat?” Turns out the secret is your Tikka Masala intake).

Unsurprisingly, reactions to Duca’s piece ran the gamut from devastation to triumph. Yet, the most common response was middle-ground shock. Many approved the politics of Duca’s manifesto, yet remained unable to wrap their heads around the fact that terms like “gaslighting” and “homecoming” were used in such proximity. Duca herself acknowledges the condescension evident in this double-edged feedback. “People write off teen girls as some separate species living in a bubble made of lip gloss,” she says. “Young women have the right to equal ownership of the political conversation.”

Indeed, a key revelation evident in the reactions to this article is the continuing devaluation of young women’s opinions and cerebral expressions. In criticizing this piece, or even admitting disbelief at the possibility of its existence, one is simply proving why teen girls would need such an intellectual outlet as Teen Vogue in the first place.

The recent attention drawn to Duca’s article makes Teen Vogue’s evolution seem sudden, almost jarring — as though one night all teen girls went to sleep dreaming of Zac Efron and woke up the next day plotting political upheaval. However, the recent buzz is merely symptomatic of a much grander editorial metamorphosis that has been happening at Teen Vogue for more than a year. At the head of Teen Vogue’s editorial refocusing is the fresh, young team in charge. In May of 2016, then-29-year-old Elaine Welteroth was named editor-in-chief, replacing Amy Astley, who had headed the magazine since its 2003 inception. Not only is Welteroth the youngest editor in Conde Nast history, but she is only the second black woman to hold the title of editor at large with any of Conde Nast’s subsidiaries (the first being Keija Minor, who became the editor-in-chief of Brides just as recently as 2012). Welteroth’s team includes creative director Marie Suter and digital director Phillip Picardi. Together, this trio is clearing away the stale Ugg boots and making room for “The Future is Female” t-shirts. An assortment of recent stories have touted “Eco Activists Saving the Planet,” “What Queer Means: A Pride 2016 Explainer,” and “Why Black History Month Still Matters.”

Still, the Teen Vogue editors, for all of their genius, are not working from scratch. It’s possible the magazine would have published “How to Tell if He Likes You” articles for years to come, were it not for the demands of teen girls themselves. With print circulation numbers down and social media platforms like Tumblr creating unique spaces, adapting to the new wave of informed, active and outspoken young women was a matter of life and death for Teen Vogue.

A clear precedent and model for Teen Vogue’s present incarnation is none other than Rookie. The Tavi Gevinson-headed site of five years has built itself into a hub for young readers, writers and artists eager to break away from the mainstream. Judging by the sold-out Rookie yearbook tours and continuous increases in Web traffic, the last thing today’s young women want is the mainstream. The diverse and inclusive ethos, as well as the charming, girly-reclamation aesthetic of Rookie, seem to be a blueprint for Teen Vogue’s revised mission statement.

Writer Arabelle Sicardi (who has worked with both Rookie and Teen Vogue) notes that a not-insignificant number of Rookie writers have gone on to work with the Teen Vogue team. Yet, a key distinction remains: for the major role it has come to play in many young women’s lives, Rookie lacks the assets of space, staff and funding. Nevertheless, “Rookie still managed to do this kind of critical work -- interviews, roundtables, essays, videos for political teens -- and has done so for years,” Sicardi says. That is to say, with powerhouse publisher Conde Nast behind Teen Vogue, the intellectual life of teen girls has an entirely unique abundance of resources, readers and publicity. This uncharted territory will either be a place of failure or revolution.

Though feminists and feminism have existed and will continue to exist, there is no doubting that the “F” word is presently at peak marketability. “Empowerment” is on the tip of every ad exec’s tongue, trying to find how a product can be pushed through the carefully coordinated use of Lena Dunham and Amy Schumer. It’s become physically impossible for a celebrity in possession of two X chromosomes to sit down for an interview without being grilled about her views on gender equality. There is even a feminist subscription box service, which can bring enlightenment directly to your mail slot for only $69.95.

With that said, one must ask the delicate question: In allowing Teen Vogue’s radical transformation, is Conde Nast merely capitalizing on commercialization of feminism? The work of Teen Vogue’s freelancers and staffers may be genuine, but should one be wary of the larger corporate interests behind these opinions? Presently, there’s no evidence indicating one should fear. Yet, in the months and years to come Conde Nast will be forced to prove its accountability. Sicardi points out that such an intense spotlight being cast on marginalized writers essentially erases the barriers of a safe space that might exist somewhere like Tumblr, thus exposing these writers to significantly higher levels criticism and harassment.

“How are publications protecting the writers who are most at risk, most vulnerable?” Sicardi asks. “Are places trying to offer long-term opportunities for marginalized voices, rather than just use them for quotes?” These, they say, are questions one must ask not only of Teen Vogue but of every publication — particularly those claiming to represent today’s young women — lest it merely be culpable in ongoing exploitation.

For now, it is imperative that we embrace Teen Vogue’s new shine. Though feminism may be a trend in the larger world, for the magazine’s young readers it has proven vital. After years of declining circulation numbers, Teen Vogue has curtailed the loss and is steadily maintaining its print subscribers. What’s more, Web traffic has more than doubled in the past year. The “if you build it, they will come” strategy has proven true for the Teen Vogue team. Or, perhaps more accurately, “if you act like teen girls are human beings, they will come.” As Sicardi sagely notes, “This work has been happening. It is not coming from nowhere. We have been here. People have been here. It's just now everyone is listening.”

As for those who can’t seem to look beyond the now-ancient covers featuring Mischa Barton and “Fast Fixes for Your Fashion Crises,” Teen Vogue isn’t looking back, and neither should we.