What truth? George Orwell, Aldous Huxley and the Trumpified political reality of 2016

Taken together, the two great dystopian novelists of the mid-20th century might have dreamed up Donald Trump 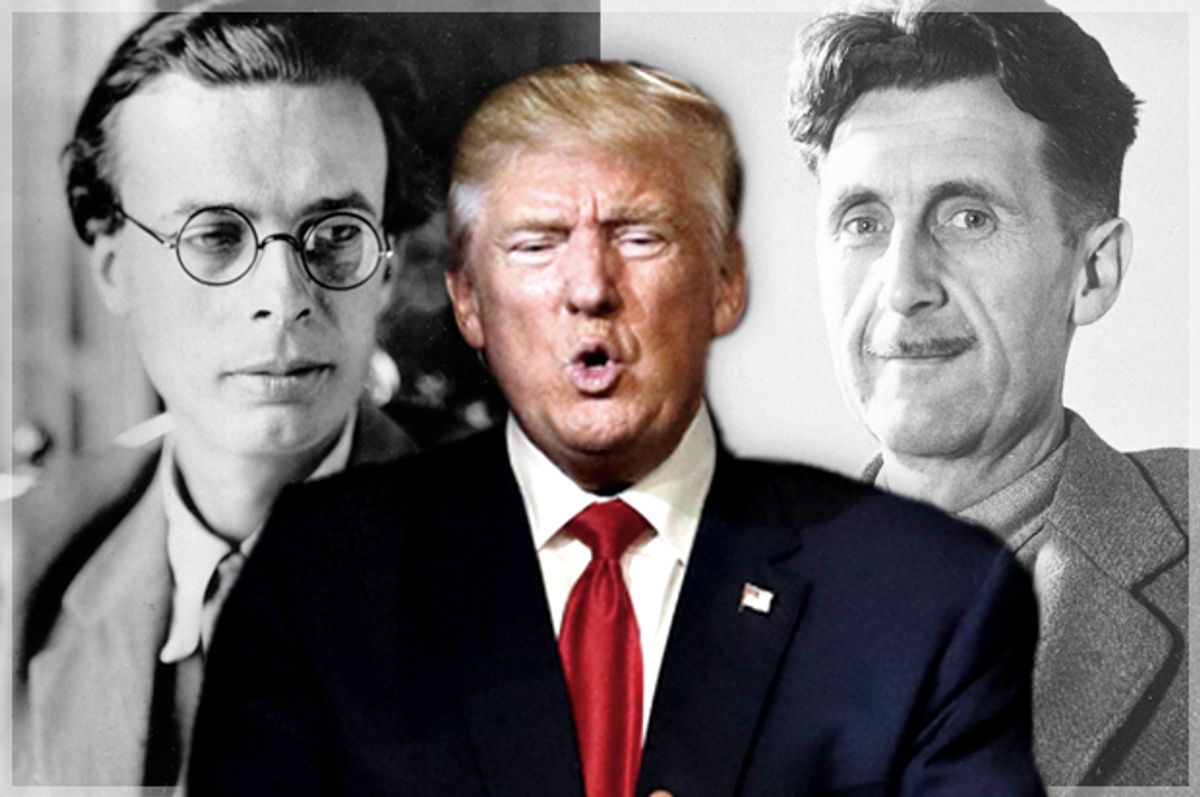 In a diary he kept in 1942, the novelist and essayist George Orwell recorded the disgust he felt for his contemporaries and the political discourse of his day, which was pervaded by intellectual dishonesty and callous partisanship:

We are all drowning in filth. When I talk to anyone or read the writings of anyone who has any axe to grind, I feel that intellectual honesty and balanced judgement have simply disappeared from the face of the earth. … Everyone is dishonest, and everyone is utterly heartless towards people who are outside the immediate range of his own interests. What is most striking of all is the way sympathy can be turned on and off like a tap according to political expediency.

For anyone who has just lived through the 2016 election, these words may feel like they could have been written today. More than 70 years after Orwell recorded this entry in his diary, intellectual dishonesty and partisan hackery seem to be just as pervasive in contemporary America as in mid-20th century Europe. Consequently, it can be difficult at times to know what to believe or who to trust.

Depending on whether you’re a Trump partisan or a Clinton partisan, a Democrat or a Republican, a conservative or a liberal — and so on — you may or may not believe that the Russian government interfered in the 2016 presidential election, as the CIA has alleged, or that the John Podesta emails that WikiLeaks released during the election were falsified. Depending on whether you get most of your news from cable networks or YouTube channels, you may or may not think that Donald Trump is a Manchurian candidate under the control of Vladimir Putin, or that Hillary Clinton has Parkinson’s disease and was planning on taking everyone’s guns away once elected president. And, of course, depending on who you follow on Twitter or Facebook or Gab — the alt-right alternative to Twitter — you may or may not believe that Clinton lost the election because of the Green Party’s Jill Stein, or that widespread voter fraud cost Trump the popular vote, or that climate change is a hoax, or that crime is out of control in America, or that Trump was institutionalized in a mental hospital in 1990. On and on it goes.

To put it another way: In our increasingly tribalistic political landscape, each side or faction lives in its own separate reality, where it feels not merely entitled to its own opinions, but increasingly to its own facts as well. (Needless to say, not all sides are equally delusional,)

“People that say facts are facts — they're not really facts,” remarked Trump surrogate Scottie Nell Hughes earlier this month, while seemingly describing the philosophy of Trumpism. “Everybody has a way — it's kind of like looking at ratings, or looking at a glass of half-full water. Everybody has a way of interpreting them to be the truth, or not truth. There's no such thing, unfortunately, anymore as facts.”

In other words, facts are now opinions and there is no such thing as objective truth. Thus, when Donald Trump was parroting the “Birther” conspiracy back in 2013, which posited that Barack Obama was a closeted Muslim who was born in Kenya, it was not an obvious falsehood, because millions of Americans believed it to be true. When Trump tweeted last month that widespread voter fraud had cost him the popular vote — a claim that originated from a single Twitter user without a shred of evidence — the president-elect wasn’t really lying, because millions of his Twitter followers instantly accepted his claim as the truth.

This kind of denial of objective truth is not a new political concept, of course, and was a topic that Orwell wrote about extensively. “Nazi theory indeed specifically denies that such a thing as ‘the truth’ exists,” he wrote in his 1943 essay “Looking Back on the Spanish War.” “If the Leader says of such and such an event, ‘It never happened’ — well, it never happened. If he says that two and two are five — well, two and two are five.”

Fortunately, no single politician or party (or corporation) has the sheer power or influence or control in contemporary America to completely rewrite history or challenge self-evident truths. Two plus two is still four, at least for now. But the fact that a surrogate for the incoming president — who has a long, extensive history of lying — is now denying that “the truth” exists should send shivers down one’s spine.

This ability to deny the existence of objective facts was made possible not only by the Balkanization of our politics and the collapse of trust in our democratic institutions, but by the trivialization of our culture and an information overload ushered in by the digital age.

At this point in an Orwell-themed essay, one usually starts to specify all of the different ways that his classic novel “1984” has become a reality. But while the rise of Trump obviously has an Orwellian feel to it, there is another, lesser-known dystopian novel of the 20th century that may better explain our own time: Aldous Huxley’s “Brave New World.”

The late media theorist Neil Postman juxtaposed the two masterworks and the different fears that inspired each author in his book, “Amusing Ourselves to Death: Public Discourse in the Age of Show Business.” It is worth quoting at length:

Though “1984” tends to get much more popular attention than “Brave New World” — and, not surprisingly, Trump’s election has inspired numerous think-pieces about the former — the latter may be more pertinent to our own surreal time. We did, after all, just elect the first “reality-TV candidate.” Could a ludicrous figure like Trump, who thrives on triviality and treats politics as a game show, where ratings are of the primary importance, have won in a society where the populace read books in their free time rather than watching reruns of “The Apprentice” or binging on Netflix? Could he have succeeded in a society where more people turn out to vote than tune in to the Super Bowl? Would the proliferation of “fake news” be such a threat to our democracy if our populace had sufficient critical thinking and media literacy skills?

While Orwell’s prescient warnings about propaganda and the abuses of language are as important today as they were in the 1940s — and his struggle to dig through all of the partisan bullshit of his day (i.e., communist, fascist and capitalist propaganda) and report the unvarnished truth is a model for today’s journalists — Huxley’s vision of a credulous, hedonistic, trivial and ignorant population has proven to be just as prophetic.

As our politics have grown increasingly tribalistic and our discourse has been flooded with propaganda and “fake news,” reality has become more and more illusory. Now a dangerous demagogue who could have only been dreamed up by the collective imagination of Orwell and Huxley has risen to power by crafting his own absurd reality.

As in Orwell’s time, we are drowning in filth. Let us hope we can find a way to pull ourselves out.