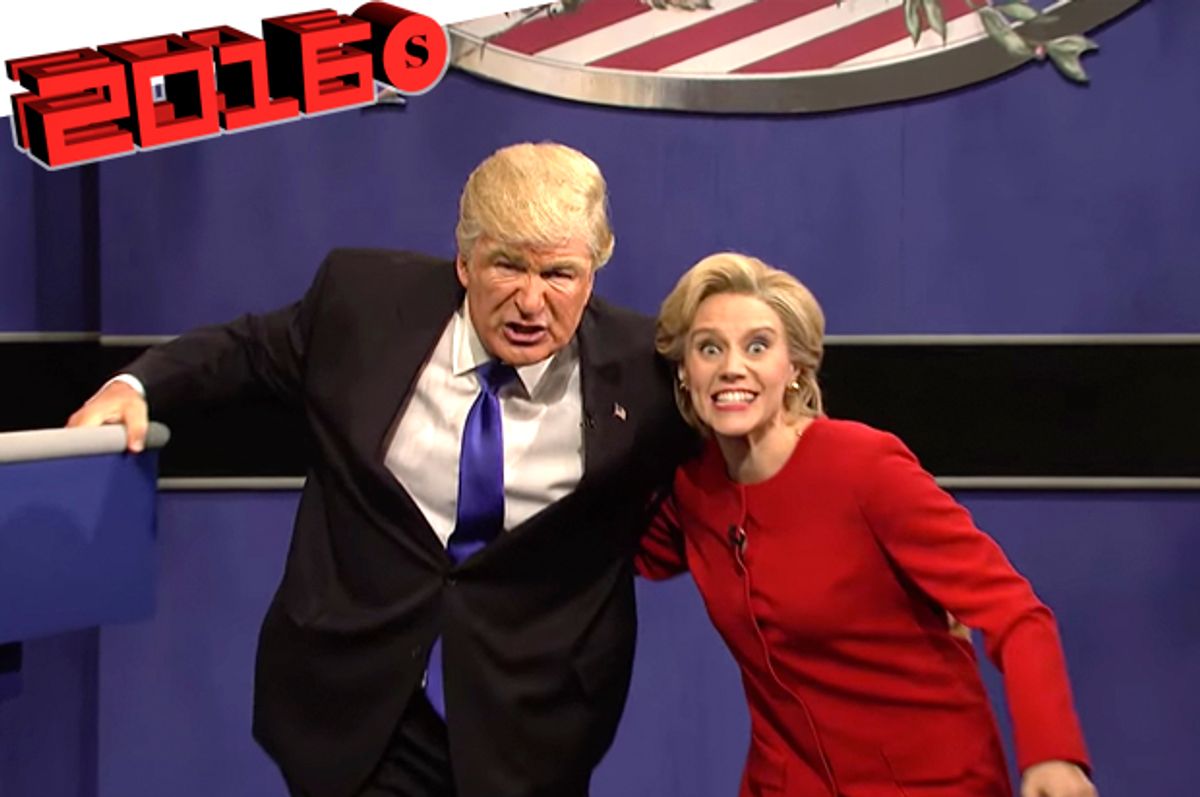 Even if you were crying with a carton of ice cream for most of 2016, "Saturday Night Live" never failed to come through with sketches to make light of even the darkest points of the election cycle — and even gave us one sketch that plucked our heartstrings.

Larry David debuted his Senator Bernie Sanders impression in February amidst the Democratic primaries. His scary-accurate impersonation left America half wondering if the "Curb Your Enthusiasm" comedian had been moonlighting as a Vermont senator for the past nine years.

Real-life Senator Bernie Sanders also made an appearance with Larry David on "SNL" in February. The sketch took place on a a sinking steamship — a slap-in-the-face metaphor for the nation, no doubt.

"I am so sick of the one percent getting this preferential treatment," Sanders said, echoing his rally cry during the primaries. "Enough is enough!"

The Trump family versus the Clintons on "Family Feud" gave viewers a few insights into each side's strategies in October.

"Okay, well, Steve, I do not have an answer even though I did buzz in. So I'll do what I usually do which is talk and talk and talk until people forget the question, and then I'm going to make an insane claim about Hillary," Kate McKinnon said as Trump campaign manager Kellyanne Conway. "Hillary Clinton is North Korean."

In October, "SNL" featured the women of Donald Trump's campaign in a music video echoing Beyoncé's visual album "Lemonade." The unforgiving rendition showed how Trump ruined daughter Ivanka's relationship with friend Chelsea Clinton and embarrassed his family with sex scandals. The group of Trump women, headed by Cecily Strong as his wife Melania, stood together and looked at the camera and said to Trump: "Without us you wouldn't be standing there."

Jay Pharoah's Ben Carson reminded us just how ridiculous Trump-supporting members of the GOP looked when they swallowed their pride and finally endorsed the Republican candidate for president in March.

"You know, we've had our polite disagreements," Pharoah said as Carson. "I questioned his knowledge on health care, and he called me a psycho and a child molester."

While Alec Baldwin perfectly captured Trump's feeble attempts to "stay calm" during the first debate, Kate McKinnon mirrored Hillary Clinton's attempts to make herself relatable while taking down her opponent, mentioning that Trump cheats middle-class laborers like her very own "human father who made . . . I guess drapes or printed drapes or sold drapes or something with drapes."

In March, "SNL" made an ad poking fun at Trump supporters that turned out to be frighteningly accurate come Nov. 8.

"He's not some cautious politician. He says what I'm thinking," Vanessa Bayer said, as a housewife ironing her Ku Klux Klan robe.

Hillary Clinton and Bernie Sanders walk into a bar. . . .

"I'll have a beer — a new brand that people are flocking to. Something refreshing and revolutionary. Something that draws HUGE crowds!" said Larry David as Sen. Sanders.

"And I'll have the beer that no one likes, but gets the job done," said Kate McKinnon as Sec. Clinton in May when it became clear that Clinton was going to win the Democratic nomination.

"SNL"'s portrayal of the third presidential debate in late October had Sec. Clinton ready to "feast" on opponent Donald Trump, and even featured her sharpening knives.

"Saturday Night Live" is known for making us laugh, but the show also knows how to make us cry. After Hillary Clinton's loss and the death of singer/songwriter Leonard Cohen, Kate McKinnon sang Cohen's "Hallelujah" clad in white as Hillary Clinton, moving the audience in the NBC studio to tears.