Donald Trump's wrecking crew: A cabinet of zealots who yearn to destroy their own agencies 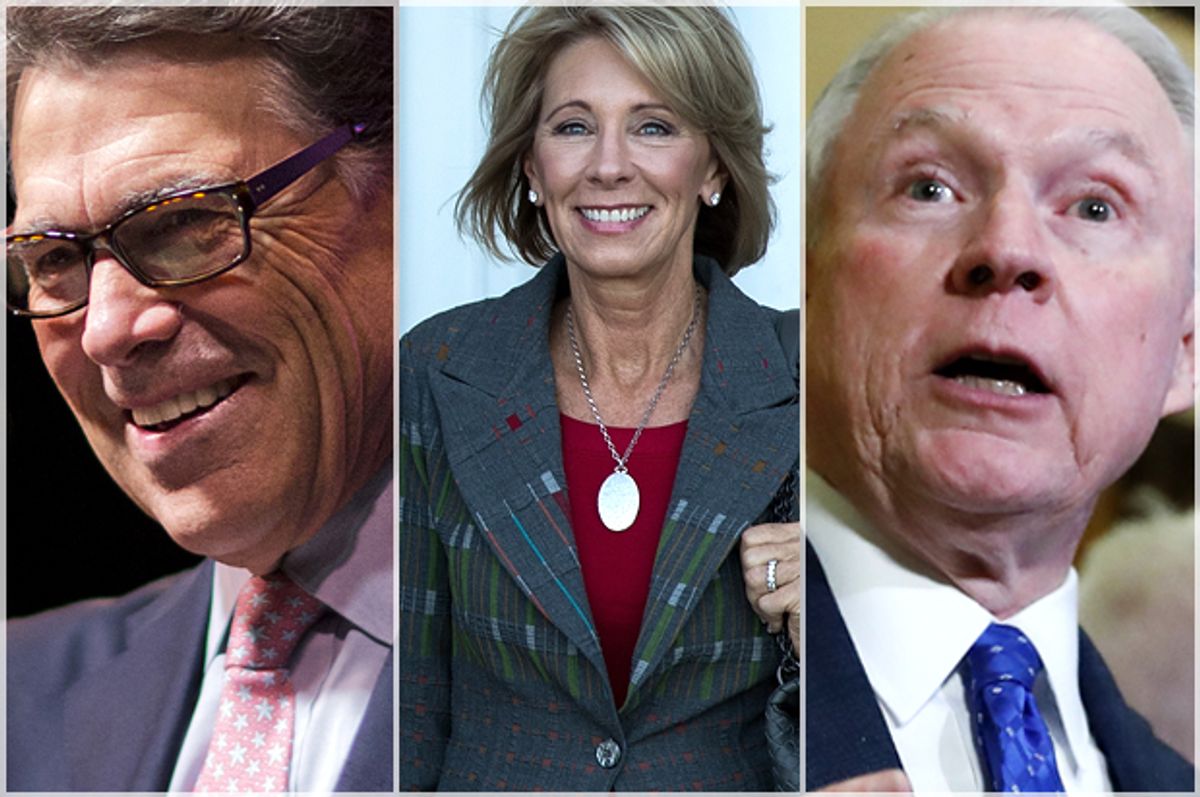 In one sense, it’s nothing new. At least since Ronald Reagan took office in 1981, Republican presidents have appointed people to head government agencies whose mission or even existence they opposed. But Donald Trump is doing this on a scale never seen before, across multiple fronts, with massive, well-funded advocacy structures positioned to support his undermining agenda.

With appointments like Scott Pruitt to head the Environmental Protection Agency, Andy Puzder as labor secretary, Tom Price as secretary of health and human services, Jeff Sessions as attorney general, Betsy DeVos as secretary of education and Rick Perry as energy secretary, Trump has advanced a whole phalanx of nominees who appear more committed to undermining the departments and agencies they head -- if not dismantling or destroying them -- than to fulfilling their lawfully-defined roles.

As Oklahoma attorney general, Pruitt has devoted his office to battling the EPA, bringing “multiple lawsuits ... intended to prevent the EPA from doing its job” on behalf of the fossil fuel industry and agribusiness. Puzder has praised robots as the ideal workers, while violating his own workers’ rights. Price, like House Speaker Paul Ryan, wants to privatize Medicare and downsize Medicaid. Sessions' history of racism disqualified him as a federal judge in the 1980s, and should remain disqualifying to this day. DeVos is a leading advocate of privatizing education, without oversight or standards, which has substantially increased segregation in Michigan. Rick Perry campaigned for president in 2012 on a promise to eliminate the department he's now slated to head, although he forgot its name in his famous "oops!" moment. Only Perry has openly called for the elimination of his own agency, but all these appointees embody a profound antipathy to the animating spirit of organizations they've been appointed to head.

Such appointments are not unheard of in American history. But they're generally few and far between, whereas Trump has given us a whole barrage of them. Reagan also promised a dismantling of government, but primarily appointed people with substantive track records. Except for Ann Gorsuch at EPA and James Watt at the Interior Department, Reagan's appointees' actions on the job were muted by political and institutional reality — reality that Donald Trump revels in rejecting.

Reagan had campaigned in 1980 on eliminating the newly formed Department of Education, for example, but then appointed Terrence Bell as its secretary — a man who had served as education commissioner under Richard Nixon and Gerald Ford, essentially the same post before it became a cabinet position. Dismantling the department would have required congressional legislation — an obvious nonstarter — and Bell switched gears, getting Reagan to appoint a commission to study excellence in education, which in turn sowed the seed for the neoliberal “education reform” movement that has plagued America ever since. Nonetheless, the Education Department has continued doing important work, despite Reagan’s campaign pledge.

Although Trump spoke broadly about deregulation, as Republican candidates always do, his vague rhetoric laid no clear Reaganesque predicate for the undermining agendas represented by all these hostile appointments. Trump repeatedly called for abolishing the EPA early in his campaign, but changed his tune in September, saying he wanted to “refocus the EPA on its core mission of ensuring clean air, and clean, safe drinking water for all Americans" and promising that his environmental agenda would be "guided by true specialists in conservation, not those with radical political agendas" — by which he undoubtedly means the 97-percent majority of climate scientists.

The EPA's defined mission statement is “to protect human health and the environment.” Scott Pruitt’s mission has been the exact opposite: to protect the fossil fuel industry and fight the EPA on multiple fronts:

Only the last of the four examples involve climate change, but all four involved the fossil fuel industry. Pruitt also opposed the rest of the EPA’s Trump-defined “core mission” as a leading foe of EPA’s clean water regulations.

"You’d have to go back to Anne Gorsuch, Reagan’s first EPA chief, to find an ideologue like Pruitt,” Jay Michaelson wrote at the Daily Beast, “and she was cited for contempt of Congress after failing to clean up Superfund sites, starving the EPA, and refusing to turn over critical documents to legislators. She ultimately resigned in disgrace."

Gorsuch was the leading example of a Reagan appointee dedicated to dismantling the body she was appointed to head. But she was closely linked to another such figure, Secretary of the Interior James Watt, who pursued a similar agenda and also resigned in disgrace. But most of Reagan’s appointees took less of a slash-and-burn approach — out of necessity, if nothing else — instead planting seeds for future reversals.

In contrast, Trump’s pick for Interior is himself a recently converted product of that long-term strategy. A self-described “Teddy Roosevelt Republican,” Ryan Zinke won the Montana League of Conservation Voters' endorsement when he first ran for the state legislature in 2008, according to Steve Thompson, a local environmental leader writing in the Flathead Beacon in October 2014. “If Ryan Zinke was running for Congress in 2010, he’d have my support. Because in 2010 he was unafraid to put leadership before politics. Sadly, the opposite is now true. I now regard Zinke to be an unprincipled, self-glorifying, dangerously cynical phony.” Zinke was indeed elected to Congress, and now boasts a 3 percent voting record from the League of Conservation Voters.

He was also identified as a "supporting cast" member of the "Congressional Anti-Parks Caucus," a small group of mostly Tea Party or Tea Party-influenced members — so identified by the Center for American Progress — who have destroyed the bipartisan consensus supporting national parks and other public lands that existed during George W. Bush’s presidency. As CAP noted, when Dirk Kempthorne, Bush's interior secretary, proposed a $1 billion National Parks Centennial Challenge program, "Congress passed dozens of national parks, wilderness, and public lands bills with the unanimous support of its members.” All this was in keeping with the Interior Department’s mission statement:

The Department of the Interior protects and manages the Nation's natural resources and cultural heritage; provides scientific and other information about those resources; and honors its trust responsibilities or special commitments to American Indians, Alaska Natives, and affiliated island communities.

Zinke belongs to a small congressional minority that has staunchly opposed that mission.

There was less sound and fury in Reagan’s Department of Labor than elsewhere. But corporate America’s preponderance of economic power, the throttling of labor law enforcement combined with a massive investment in anti-labor organizing, and a sweeping wave of deindustrialization and outsourcing did far more damage to labor than Gorsuch, Watt and their allies did to the environment.

The labor secretary serves as the chief advocate and protector of our nation’s workforce. But based on Mr. Puzder’s own comments, it’s hard to think of anyone less suited for the job of lifting up America’s forgotten workers — as Trump had campaigned on — than Puzder: He opposes raising the minimum wage, threatens to replace restaurant workers with machines, has consistently opposed long-standing rules that protect workers and law-abiding employers, and demonstrated that he prizes corporate welfare and profits over workers’ well-being.

Puzder’s company, CKE Restaurants, which runs the Hardee’s and Carl’s Jr. fast-food chains, has a long history of being named in class-action lawsuits alleging failure to fairly compensate its managers for overtime. When the current Labor Department conducted 4,000 investigations into the 20 largest fast-food brands, more than half of Carl’s Jr. and Hardee’s restaurants had at least one wage-and-hour violation.

In short, Puzder is diametrically opposed to the mission of the department he’s been appointed to lead. The same can be said about Tom Price, Trump’s appointee to head the Department of Health and Human Services. Price has developed plans to deprive tens of millions of Americans of health care — the exact opposite of the HHS mission.

Trump campaigned on repealing Obamacare, in line with the rest of the GOP, while promising to defend Social Security, Medicare and Medicaid. But Price has been a leading voice in GOP House efforts to privatize Medicare, proposing turning it into a voucher system, and block-granting Medicaid with declining funding over time, leaving states with the dirty work of actually denying coverage to millions of citizens.

According to a March 2015 analysis by the Center on Budget and Policy Priorities:

Price’s budget plan proposes to radically restructure Medicaid by converting it to a block grant and cutting federal funding for it steeply, by $913 billion over the next decade. It would also repeal health reform’s Medicaid expansion. The combined Medicaid cut would reach $1.8 trillion over ten years, relative to current law, adding tens of millions of Americans to the ranks of the uninsured and underinsured.

Repealing health reform's Medicaid expansion means that at least 14 million people would lose their Medicaid coverage or no longer gain coverage in the future….. In addition, the large and growing cut in federal Medicaid funding from the block grant would almost certainly force states to sharply scale back or eliminate Medicaid coverage for millions of low-income people who have it today. All told, after accounting for the plan’s proposed repeal of health reform’s marketplace subsidies, tens of millions of people would likely become uninsured under Chairman Price’s plan.

As for Social Security and Medicare, the day after Price’s nomination, the Center for American Progress noted:

Rep. Price — who currently chairs the House Budget Committee — released a new agenda that would enable automatic across-the-board cuts to Social Security, Medicare, Medicaid, and other programs for low- and middle-income Americans…. If Congress enacts President-elect Trump’s proposed tax plan — which mostly benefits the wealthiest Americans — then Rep. Price’s automatic cuts would slash Social Security by $1.7 trillion and Medicare by $1.1 trillion over 10 years.

That would mean tens of millions more people would lose health care coverage as well.

Jeff Sessions’ racist record should disqualify him for the post of attorney general, just as Betsy DeVos’ long record of trying to destroy public education should disqualify her from heading the Department of Education. But here’s where things start to get tricky. In the Guardian recently, Nikhil Goyal wrote:

If DeVos’s nomination is approved, she will speed along the erosion of public education, which has been going on for some time. As I explain in my recent book, "Schools on Trial," both the Obama and Bush administrations adopted a market-based approach. This was marked by privatization, austerity measures, expansion of privately managed charter schools, high-stakes standardized testing, school closures, value-added teacher evaluations and attacks on teachers unions. The No Child Left Behind Act of 2001 and Race to the Top program in 2009 were rooted in this ideology.

In short, DeVos represents that part of Trump’s wrecking crew that’s been fully embraced by the neoliberal Democratic establishment. Which makes her, in some ways, the scariest nominee of all.