Fascinating views of animals from all around the globe opening their Christmas presents. Happy Holidays! 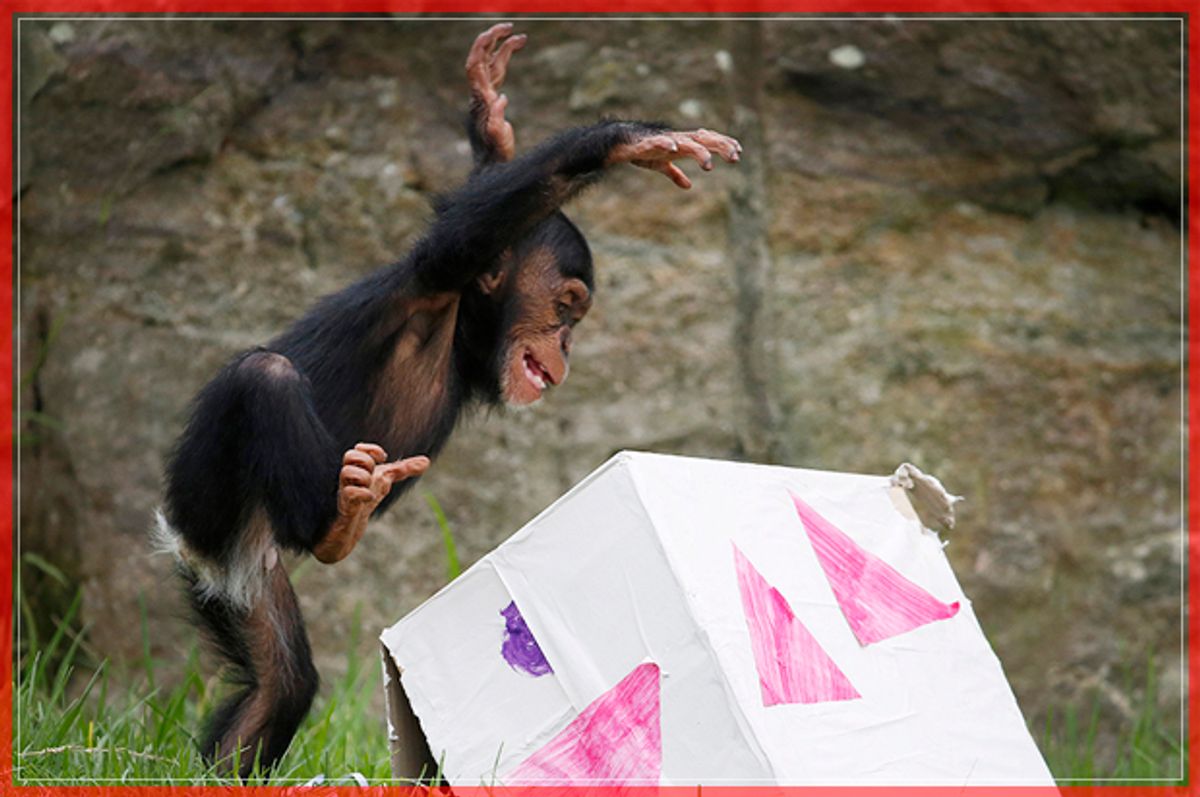 This is a special edition of Salon’s Look Again series presenting the best (and cutest) animals celebrating the holiday season.

Hanover, Germany   Holger Hollemann/Getty
These meerkats just got the best present they could imagine -- besides freedom to the outside world -- gift box filled with mealworms! The Hanover Zoo in Germany certainly knows how to celebrate the holiday season with a crunchy treat. Did you know that mealworms are an excellent source of protein? Budapest, Hungary   Boglarka Bodnar/AP
A tiger rips open a present containing chicken meat at the Veszprem Zoo near Budapest. Now that's how you're supposed to open a present -- with your teeth! Just kidding, don't do that, that's how you end up spending December 26th at the dentist for an emergency filling. Budapest, Hungary   Boglarka Bodnar/AP
A mantled guereza unwraps his Christmas present containing fruit at the Veszprem Zoo. This "Old World" monkey looks like he's ready for the winter season. The hair on his head makes it seem like he's wearing a trendy beanie he bought at Urban Outfitters for $29.99. Sydney, Australia   Jason Reed/Reuters
Fumo, the 13-month-old chimp, leaps into his Christmas present at the Taronga Park Zoo in Sydney. At the bottom of the box, there are delicious treats waiting to be devoured, but I have a feeling he will enjoy the empty box just as much. The same is true for human kids. Stretch your Christmas budget this year by returning that ugly sweater you bought 'cause you had an expiring coupon and use the money to buy a gigantic cardboard box. Sydney, Australia   Jason Reed/Reuters
A cotton-top tamarin reaches inside a Christmas bon-bon to retrieve the treats laying at the bottom. This little guy, weighing in at 1.1lbs (probably less than the bon-bon), is still strong enough to rip open the candy wrapper to get the much-deserved reward inside. Food is a powerful motivator. Tokyo, Japan   Thomas Peter/Reuters
A dolphin returns this Christmas present-prop to his trainer during a show at the Shinigawa Aqua Stadium in Tokyo. Does this dolphin look...weird to you? Maybe it's the angle, but this looks like a cartoon rendering of what someone thinks a dolphin is supposed to look like but has never seen one in real life. Hamberg, Germany   Fabian Bimmer/Reuters
Mascha, the Kamchatka Brown Bear, and her three cubs woke up from hibernation only to see what gifts Santa brought them this year. My guess? Delicious raw salmon and gooey marshmallows. But it's possible Santa got it wrong and gave them all 3-pack crew socks. Nobody's perfect, not even Santa. London, England   Hannah McKay/Reuters
I don't know why this poor meerkat doesn't have any presents under her Christmas tree this year. Maybe she was bad and killed too many of her rival meerkat pups (they are known to do that — look it up!) or perhaps Santa couldn't fit her presents under the tree since it's so small. What I do know is that there is a limit to how many pinecone ornaments you can hang on a tree. Seven is excessive.