Trump's having a ball: His inauguration may add up to just another opportunity for the rich to pay to play

Far from swamp draining, the president's arrival by the Potomac shores may be compromised by elites' easy access 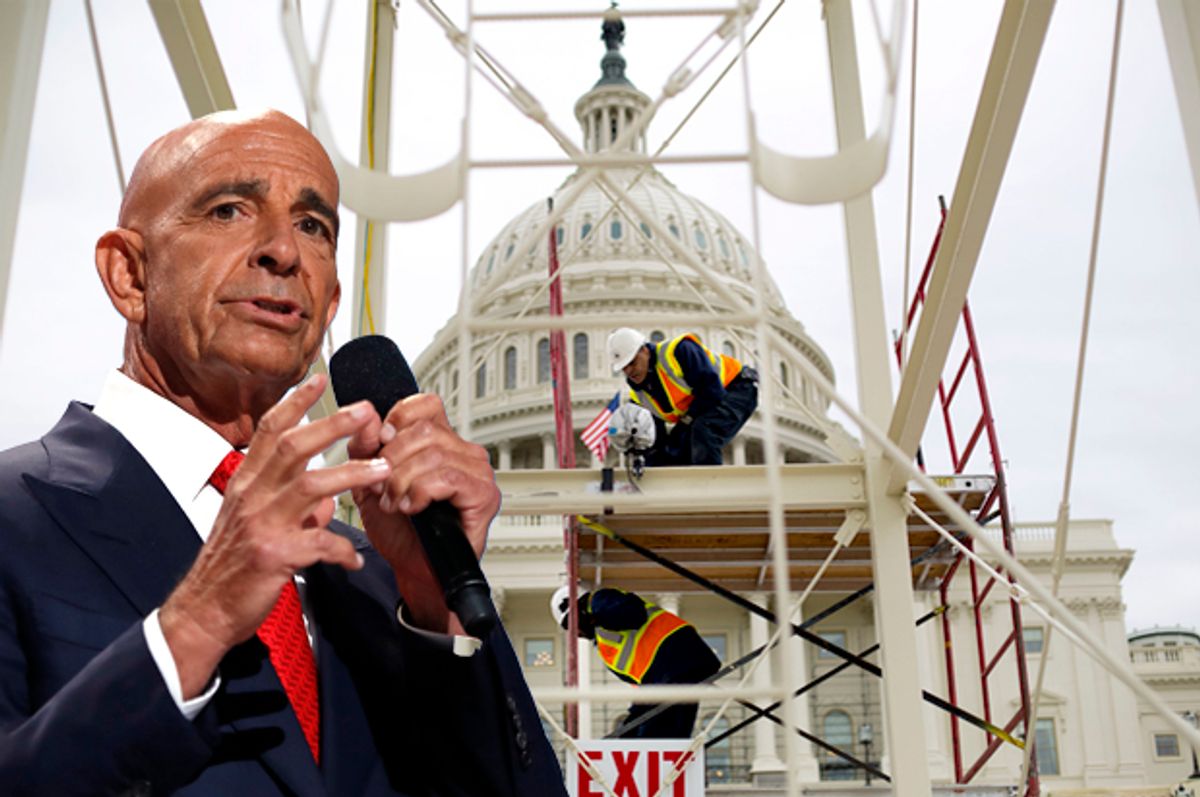 In Donald Trump's presidential campaign, his frequent, unbridled slaps at Wall Street elites and arrogant, job-busting corporate executives gave him the "populistic" patina he needed to win. But wait a minute. Who are those guys escorting the Donald into the Oval Office?

Oh, my God, they're Wall Street elites and arrogant corporate executives! Trump campaigned on the theme of remaking Washington by "draining the swamp" of pay-to-play corporate favoritism and cronyism. But those swamp critters may be the very ones aiming to buy favors from the president to be by putting up tens of millions of dollars to pay for his inaugural extravaganza and his transition operation.

The transition team itself, which is literally shaping and staffing our next national government, is a viper's nest of pay-to-play corporate interests. The teams setting up the various agencies and writing their agendas are dominated by top operatives from anti-worker corporations and the same Wall Streeters whose casino-style speculation crashed our economy in 2007 and crushed the middle class. Now they are on the inside, deciding who will fill more than 4,000 executive positions and run our government.

Some 850 of these corporate high rollers and lobbyists huddled with Trump early this month for a fundraiser at a posh Manhattan restaurant to pay for putting together his government — and theirs. The room was filled with moneyed elites, such as Paul Singer, the hedge-fund billionaire and extremist laissez-faire ideologue. These are not people who are going to finance any sort of working-class populism; they instead intend to use the Donald's victory to impose a plutocracy over America.

Pay to play is already in full effect, and Trump hasn't even spent his first day in office. His inauguration is just another opportunity for the plutocrats to buy their way into Donnie's favor. Of course, Trump had to bring in one of his longtime pals to help him plan such an elite affair. Few Americans have ever heard of Tom Barrack, but he's going to be a big, behind-the-scenes player in Trump's Washington.

Indeed, Barrack us literally in charge of parading the Donald into the White House. He chairs the presidential inaugural committee, overseeing everything from numerous balls to the swearing in. The four-day affair will, of course, be a Trumpian spectacular, yet Barrack insists it won't be outlandishly tacky. "The president-elect," Barrack said, "wants this to be about the people."

Sure, Tom, it will be that way for people like you and the other billionaires who serve on the committee.

Barrack is a speculator who runs a myriad of Wall Street funds, real estate ventures, luxury resorts and casinos. Some of the other billionaires who serve on the committee are coal baron Joe Craft, fracking pioneer Harold Hamm, Gail Icahn (wife of investor Carl Icahn) and casino moguls Steve Wynn, Phil Ruffin, Sheldon Adelson and Adelson's wife, Miriam. It's not surprising that their idea of "the people" turns out to be the privileged ones who will buy the premium inaugural tickets that include access to His Excellency Donald Trump.

Those tickets have prices starting at $25,000. But that only gets you into the bleacher seats out in right field. For the platinum seats in the luxurious owners' suites, the price is a cool million bucks.

What does that buy? An "intimate dinner" with the new vice president, Mike Pence; four tickets to a "ladies luncheon" with Melania Trump and Karen Pence; an elegant "candlelight dinner" with the Donald and his sidekick, Pence; admittance to the black-tie inaugural ball with Trump, Pence, Cabinet officials and other governmental big shots; four tickets for priority seats at the official swearing-in; and priority booking at select hotels — so you won't have to mingle with commoners.

Barrack expects to raise a record $75 million from corporations and fat cats wanting to endear themselves to the Trumpster.

Trump declared in his campaign, "Nobody knows the system better than me, which is why I alone can fix it." Yeah and now we know the price for being in on "the fix." Far from "draining" the Washington swamp, Trump is turning it into an exclusive Jacuzzi for the rich.