A postelection postmortem of the #GirlBoss era

With Hillary Clinton and Nasty Gal's Sophia Amoruso flat on the mat, #Girlboss acolytes wonder is that all there is 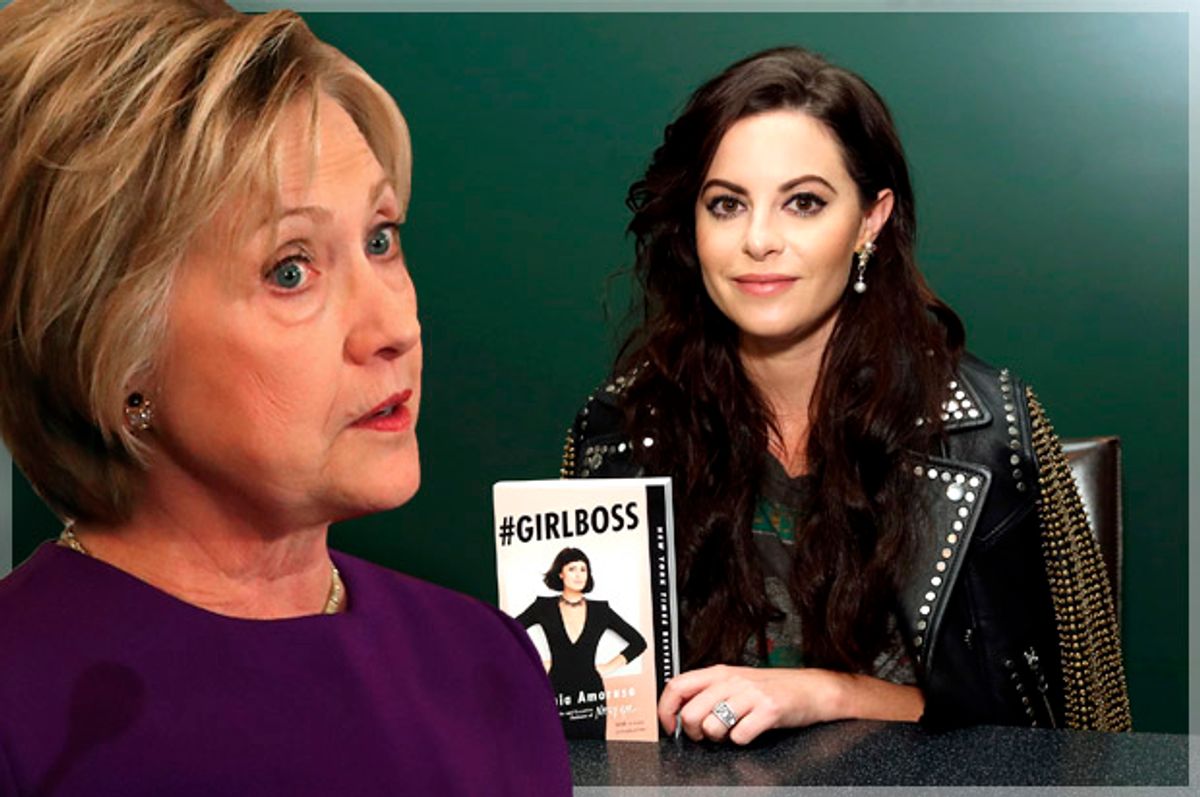 If online shopping had been a thing back then, I’m certain I would have been addicted to Nasty Gal. My mom definitely would have not allowed me to buy anything from a site with such a tartish name but I would have scrolled through the app anyway with lust in my eyes, wishing for lithe, gangly limbs and an unaffordable size XS lace romper.

I couldn’t help but snicker when, as a candidate, Donald Trump called Hillary Rodham Clinton a “nasty woman” in the final presidential debate of the 2016 electoral season. It was laughably appropriate. Millions of women had reclaimed that slur in recent years when fashion’s newly minted minx, Nasty Gal founder Sophia Amoruso, had dubbed us #GirlBosses in her best-selling book. I assumed a slew of skimpy statement T-shirts would be on sale by the time I woke up the next morning. I didn’t even want to vote for Hillary Clinton, but that kind of shit — in the wake of the pussy-grabbing tapes, no less — is the foundation of requisite female solidarity. I thought.

In retrospect, it’s telling that this wasn’t enough.

The underlying assumption, of course, is that women don’t recognize their own oppression.

Perhaps the reason for the disconnect isn’t just a reflection of deeply entrenched patriarchy. It’s worth considering that the quest for women’s equality has devolved into a flashy marketing campaign largely perpetuated by women themselves. Even The New York Times declared last spring, long before Hillary Clinton’s Electoral College implosion, that "empowerment” had become something for women to buy.

And in a jarring twist of fate, it turned out we can’t even buy it anymore. To add insult to injury, just after Hillary Clinton lost the election, Nasty Gal was filing for bankruptcy, according to news reports. Despite Sophia Amoruso’s epic Instagram account and irreverent podcast and forthcoming Netflix series, she couldn’t live up to what she had sold us either. Within a week, it felt as though 20-plus years of girl power had disintegrated.

I’m a member of several peppy women’s online forums with names like “Femmes I want to change the world with” and “The Fempire.” And the days leading up to Nov. 8 for those groups were nothing short of Jesus riding a donkey into Jerusalem on Palm Sunday a week before his resurrection. The feminists were freaking out over the idea that women had finally reached the pinnacle of American power. On Election Day it took me until 4 p.m. PT to finally fulfill my civic duty and bubble in Clinton’s name on my mail-in ballot yet even I was infected with the idea that I might be able to hold my head higher in male-dominated settings the next day. When that didn’t happen and in the days that followed, I was left with a feeling of emptiness. Not only was there no female president; it felt like the entire #GirlBoss era was uniformly rejected, too. The apparent Zeitgeist was an illusion.

Amoruso represented the wave of young women entrepreneurs who had different options than Hillary Rodham Clinton's generation, the women who weren't going to kowtow to male executives or venture capitalists, who didn't have to behave as de facto men to maintain and assert power but could express themselves authentically and structure their businesses accordingly. Ivanka Trump can hardly stand in Sophia Amoruso's high heels. She hasn’t quit, however; Nasty Gal is restructuring and plans were recently announced that she’ll be hosting a #GirlBoss conference in Los Angeles next year.

The rest of us can’t quite either. Women don’t live in Hillary Clinton’s America anymore, and sometimes it seems as though the vestiges of the suffrage movement are only vaguely embedded in our present reality. What’s clear going forward is that adorning ourselves with false empowerment isn’t going to put a woman in the White House.