The star, dead on Christmas at 53, leaves behind a musical and cultural legacy of "stubbornly" sticking up for pop 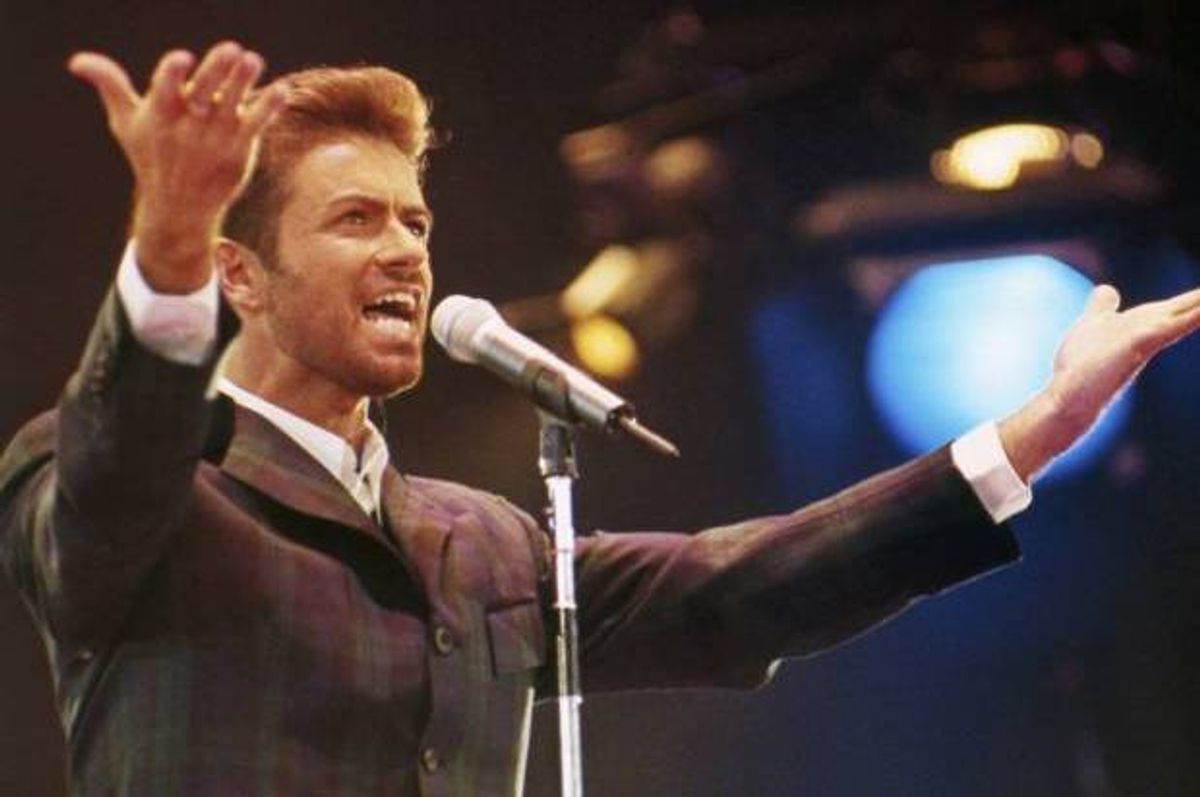 On Christmas Day, '80s pop icon George Michael, who found fame first with Wham! and then later as a solo artist, died unexpectedly. He was 53. According to Billboard, the cause was heart failure. His manager, Michael Lippman, told the magazine he was "devastated," a sentiment Michael's long-time friend and sometimes collaborator Elton John echoed on Instagram: "I am in deep shock. I have lost a beloved friend — the kindest, most generous soul and a brilliant artist." Madonna, meanwhile, neatly summarized the incredulous response that dominated social media reactions to Michael's death: On Instagram, she posted video of her introducing him at the 1989 MTV Video Music Awards with the caption "Farewell My Friend! 🙏🏻 Another Great Artist leaves us. 💔Can 2016 Fuck Off NOW?"

What's even more wrenching is that at the time of his death, Michael was poised for a major resurgence. A deluxe reissue of 1991's "Listen Without Prejudice Vol. 1," dubbed "Listen Without Prejudice 25," is due in March 2017. This reissue is scheduled to coincide with the release of a film, "Freedom: George Michael," which is said to cover the making of the original album; an early '90s fight over contracts with then-label Sony; and his anguish and emotional devastation after the 1993 death of his boyfriend, Anselmo Feleppa. People testifying about Michael's talent in "Freedom: George Michael" include Stevie Wonder, Elton John, Mark Ronson, Mary J. Blige, Tony Bennett, Oasis' Liam Gallagher and late night host James Corden.

Michael is reportedly the narrator of this documentary, which is as it should be: The man born Georgios Kyriacos Panayiotou steered every aspect of his career, starting with and including Wham!'s first album, 1983's "Fantastic." Michael doesn't receive nearly the respect he deserves for his songwriting prowess, but he's a prodigious talent who wrote "Careless Whisper" at age 17 (it was on a demo tape that nabbed Wham! — Michael and childhood pal Andrew Ridgeley — a record deal) and the bulk of Wham!'s hits: the kitschy throwback "Wake Me Up Before You Go-Go," blue-eyed soul romp "Freedom" and the sinewy disco-pop boil "Everything She Wants."

Michael also wrote, arranged and produced his multiplatinum 1987 solo bow, "Faith" — a varied record touching on everything from swinging blues and jazz croons to sassy digi-funk — by himself. When he grew tired of the pop machinery grind, he made a 180-degree turn and released the sophisticated and decidedly not Top 40-leaning "Listen Without Prejudice Vol. 1." He accomplished all of this, incidentally, before the age of 30.

In hindsight, Michael assimilated his influences so thoroughly, it's difficult to single them out. (One exception might be Stevie Wonder: "Listen Without Prejudice Vol. 1" has a stunning, piano-and-voice take on "They Won't Go When I Go," and he covered "Superstition" on the Cover To Cover tour.) Michael grew up a fan of David Bowie, Queen and Elton John, but his music only skimmed the essence of those artists: coy and fluid sexuality, swagger mixed with vulnerability, voracious musical appetites. Sonically, Michael's music was modern and progressive, and effortlessly amalgamated rock, funk, soul, R&B and dance. Yet he embraced elements such as a gospel choir or horn section, and incorporated these flourishes seamlessly.

In a sense, he managed to be both commercial and transgressive, while taking a holistic and flexible view of what his music could sound like. "People have the perception that if all you write is pop music, as opposed to something that reveals a far deeper character, it's because that's all you can do," he told Rolling Stone in 1988. "Not because it's all you choose to do, and not because it's the area you love. If you listen to a Supremes record or a Beatles record, which were made in the days when pop was accepted as an art of sorts, how can you not realize that the elation of a good pop record is an art form? Somewhere along the way, pop lost all its respect. And I think I kind of stubbornly stick up for all of that."

Unsurprisingly, Michael was wise beyond his years, an old soul writing pop songs to capture the heartbreak of the human condition and quell his own inner sadness. For example, despite a tentative new relationship, the protagonist of Wham!'s "Last Christmas" is still smarting from last year's romantic wounds. Due to this ability to tease out nuance, Michael successfully transitioned into a more sophisticated, adult-leaning solo career. In fact, one of his most gorgeous songs was the sumptuous 1996 hit "Jesus to a Child," a song about Feleppa that contains lovely sentiments about the enduring and fleeting power of love.

Such melancholic songwriting practices are intrinsic to artistic geniuses, a class frequently on another creative plane because they feel things much deeper than most people. However, Michael's sexuality — he came out in 1998 after being arrested in a park restroom for misdemeanor lewd conduct — also weighed heavily on him, especially because he was ready to announce his bisexuality early in Wham!'s existence, but "basically my straight friends talked me out of it," he told GQ in 2004. "I think they thought as I was bisexual, there was no need to. But it's amazing how much more complicated it became because I didn't come out in the early days. I often wonder if my career would have taken a different path if I had."

Michael's inner turmoil also informed his vocal timbre and delivery, as he possessed a stunning, aching soul voice capable of covering songs from icons (the Isley Brothers, Rufus and Chaka Khan) and upstarts (Terence Trent D’Arby, Soul II Soul). Over time, however, his voice stratified and became richer and more resonant. On a 2014 cover of Rufus Wainwright's "Going to a Town," he sounds brassier, and his delivery has a weary vibe; on another cover he favored in recent times, the Broadway- and Nina Simone-popularized "Feeling Good," he adds jaunty, theatrical sizzle to his singing.

Admirably, Michael possessed a stubborn moral compass and maintained a deep sense of personal career integrity, even if this came at the expense of fame or industry success. At his early '90s commercial peak, he declined to appear in the David Fincher-directed video for "Freedom '90," and instead cast a bevy of supermodels to lip sync the song. Several years later, he sued then-label Sony Music because he considered the lengthy contract in which he was locked to be "professional slavery." He lost — and later reconciled with Sony — but his lawsuit became a landmark artist's rights case.

Throughout, Michael remained an outspoken advocate for causes in which he believed. Besides his support of AIDS-related charities and organizations (for example, 1992's "Red Hot + Dance" benefit compilation, which contains "Too Funky"), he was politically outspoken. In 2003, for example, he performed a haunted version of Don McLean's anti-war song "The Grave" on "Top Of The Pops." Michael had many such detours in his career, especially during the late '90s and '00s; for anyone not paying attention, it was easy to miss how his career was evolving.

However, despite his reduced public presence in recent years, Michael remains a major influence on the global pop landscape. U.K. soul-pop giants Sam Smith and Adele are avowed fans, as well as direct spiritual and musical descendants; Adele even once dressed up as him. Justin Timberlake and Robbie Williams followed Michael's blueprint from boy band to serious solo megastar; no doubt Zayn Malik and the other members of One Direction are working on a similar path. And Frank Ocean's genre and sexual fluidity, as well as fiercely independent artistic vision — as heard on his beloved 2016 LP, "Blonde" — also nod to elements of Michael's career.

In light of his divergent influence, it's no wonder that after news of his death broke, the videos people by which chose to remember Michael varied wildly. For me, three Michael performances endure. One is a mash-up of Adamski's "Killer" with the Temptations-popularized "Papa Was A Rollin' Stone," which dates from a March 1991 live performance at Wembley Stadium. Michael is at the peak of his stage charisma, and the song itself is a squelching, glassy dance number with strident horns and funky grooves. The second clip is "Don't Let The Sun Go Down On Me," his early '90s Elton John cover/collaboration that hit No. 1 in both the U.K. and U.S. and featured one of Michael's most passionate, fiery performances.

And the last clip to which I gravitate depicts Michael rehearsing "Somebody To Love" with Queen before their joint performance at the 1992 Freddie Mercury Tribute Concert. David Bowie himself is watching side-stage, smoking and nodding in approval as Michael struts around the backstage area, nailing the song's vocal dips and surges with jaw-dropping ease, and exhibiting impressive power. (He also air-drums to the song, in a charming nod to his long-time Queen fandom.) In that clip, he seems unstoppable, quite possibly the only person able to do Mercury justice.

Michael's resiliency in the face of a litany of career derailments — record label battles, physical illness, tabloid attention, drug addiction, commercial struggles — was perhaps his most admirable quality. Even after he retreated from the spotlight, he always seemed poised for a comeback. As 2017 dawns, Michael will no doubt receive plenty of critical reassessment and a commercial bump. That he's not here to experience or enjoy either of these things is the cruelest kicker of all.