My face is catfish bait: I'm the "40-year-old man" face of deceptive online dating — and I think I know why they do it

My selfie has been swiped for more fake profiles than I can count. It's gross deception — but I've been tempted too 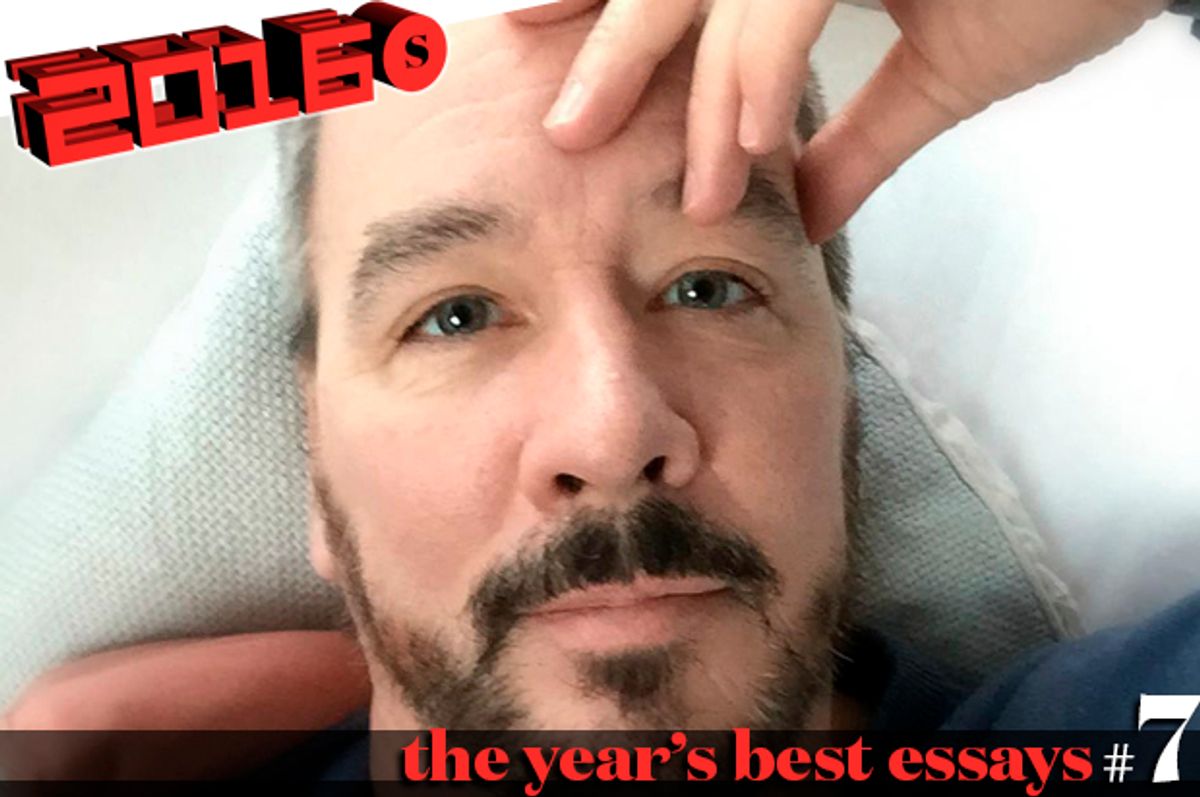 The author in one of his stolen photos
--

“I honestly can’t believe I am even emailing you, but your face has meant a lot to me. And now I’ve found out it’s a lie.”

The note came from a woman I had never met. I would have considered it spam, but it was too well written and there were no links for erectile dysfunction pills. She read my blog, she looked at my pictures and she was devastated.

She was not, in fact, the first woman to contact me about this. The Facebook friend request icon had glowed red the night before, and behind door number one was another stranger, Helen. I did what I always do first and expanded her profile picture, my willingness to accept someone's friendship based on the openness of their face and the shape of their smile. Head tilted slightly to the side, a few strands of blonde hair falling gracefully over one eye, a wistful smile, and all of it softened with a forgiving filter; it was a textbook selfie. I’ve watched my youngest daughter strike this pose so many times, I’m convinced she can do it in her sleep. Once, when we were engaged in an argument, she wedged a selfie in between the words, “You’ve ruined”— head tilt, smile, click— “my life!” But, I didn’t recognize this woman from Canada, so I waited a respectable 30 minutes before clicking confirm.

“Are you familiar with POF?”

The message appeared almost as soon as I accepted the friend request.

“Plenty of Fish is a free online dating site.”

I unfriended her. I blocked her. I checked to make certain my anti-virus settings were up to date. We had no mutual friends. She must have been a Canadian sex line operator, eh?

But, now here was this email from another woman describing how she had had a four-year online relationship with someone who assumed the identity of a 43-year-old man, grieving the death of his wife.

“I probably sound crazy. But after a short Google image search, I came across you.”

When I put two and two together, I unblocked Helen on Facebook and sent an apology. I told her I thought I knew why she contacted me and she replied by sending a URL. After I clicked on the link, I expanded the profile picture, head tilted toward the camera, chin down to strengthen the bearded jawline, eyes slightly scrunched. It was a textbook selfie, and it was me.

But it was not me. He listed his age as 10 years younger than mine and his height three inches taller. He was single, not looking for anything serious. His personality was inexplicably listed as “Athletic.” I felt flattered. I felt creeped out. I felt like someone had broken into my home, but I didn’t know what he had touched or stolen, other than my face. If two women within 24 hours had contacted me, how many others had he scammed?

I right-clicked my profile picture and selected “Search Google for images.” That’s when I discovered my face floats to the top for the search phrase “40 year old white man.”

I was Dieter Falk on the social network VK in Berlin, and I was John, the president of a luxury property management company, in Kentucky. On LinkedIn, I was Richard, a car dealer in the Greater Boston area, and I was Peter, an IT consultant in Melbourne, Australia. On Yelp, I was Alfonso in Waterbury, Connecticut, griping about the local Kmart — one star. I was Kalledsson on a Swedish dating website and IsThisHowYouDoItNow, a single divorced Canadian man on Plenty of Fish. It was not just one man, but many who had robbed me of my face. I was every man and no man and I was freaked out.

But the most common link to my picture was one that led back to me, the real me, the one who had been writing about his life and posting it online, the one who shared intimate details with a world of strangers on his blog, "The Authentic Life." The one, who 10 years ago, before the TV series and the term catfish even existed, came out as gay to his wife in the punchline of all American tales — a Walmart.

“I've grieved to the depths of my soul over someone who never even existed.”

After my make-believe world fell apart and my wife and I divorced, she packed up our daughters and moved 700 miles away. I started therapy. I began to date. I created a profile on Yahoo Personals. This was in the era of flip phones and BlackBerries, before anonymous sex could be ordered up by browsing through a menu of headless torsos on Grindr and Ubered over piping-hot in less than 10 minutes.

I chose a photograph of myself that was truthful, and the only one I thought flattering. It was one my daughter Marisa had taken of me. In it, I am standing in a church parking lot, wearing a white shirt with the sleeves rolled up and a clean-shaven, pensive look. It was taken six months before our small family disintegrated. In the background, you could see a church steeple in a slice of blue sky surrounded by thunderhead clouds. But the photograph was less about what was behind me and more about what was in front of me. Marisa, from her diminutive angle, captured someone who appeared solid, tall and ready to move forward.

I briefly dated a guy from the tony town of Lexington, Massachusetts, who wondered aloud if I might look gayer if I shaved my head and grew a goatee, so I did, and then never heard from him again. At a gay father’s support group, I hooked up with a man who was not a father, but was looking for a Daddy. When he asked me if I wanted to see his collection of vintage washing machines in the basement, I decided to find it cute and quirky. After we had sex, he immediately stripped the sheets off the bed, walked down the cellar steps and shouted up, “I’ll call you later.” But he never did.

When I met Paul at a Cheesecake Factory in the Burlington Mall a week after Thanksgiving, I looked nothing like my profile picture. I was 30 pounds heavier, my head was shaved bald and my goatee dyed jet black.

“I sent an updated picture to you this afternoon,” I offered, by way of an apology.

Paul looked like his pictures, actually better. He was the tall, handsome, preppy soccer dad type with a ready smile and thick salt-and-pepper hair. It’s confounding to find someone so attractive while simultaneously feeling envious of their beauty.

“I didn’t get your updated picture,” he said “But I recognized that smile.”

When the hostess led us to our table, Paul allowed me to go first, guiding me by placing his hand on the small of my back.

“Still, and especially after all that has happened, I am so glad to see you happy in your everyday life.”

I fell hard in love with Paul, before he fell in love with me. I know this, because a month after we began dating, I was still so riddled with insecurity that I created a fake profile on Yahoo Personals and assumed the identity of Bob Smith, a transplant from Michigan. With a name so generic, I thought, he had to believe it was real. I sent a message to Paul from Bob and when he responded that he “still hadn’t found Mr. Right,” I was devastated.

I broke down in my therapist’s office and his brow became wrinkled with concern.

What he meant was that my actions were not me, that I was acting figuratively and quite literally out of character. But, wasn’t that who I was? For my entire life, I had pretended to be someone else. Hadn’t I always been an impostor? I was playing cat and mouse with the only person I had ever truly romantically loved and so I extinguished Bob Smith and became me, the real me. And I became happy. And I became happily married to Paul.

“Social media makes connecting with a random stranger pretty easy to do.”

When I asked the two women why they contacted me, their answers were startlingly similar. The catfisher had chosen to use one of my photographs with my hand to my forehead, wedding ring exposed. When they found out who I had been and who I had become and that he was compromising my new authenticity, they felt protective. They connected with the better part of him and in their minds that was me. Why did this man, and all the others choose my likeness? What did they see and who did they hope to become? A friend told me that my profile image “really is a good picture,” which means it doesn’t really look like me, and I’m OK with that, because it’s not me. It’s a static image of my face taken at a good angle. Perhaps it was the universe’s poetic response, the man who pretended to be another becomes the one others pretend to be.

I think most of us fool the world a little bit each day. On social media we choose the most flattering photos, smoothing a wrinkle here, whitening a smile there and applying a soft filter. We share the good and hide the bad. This is not something new. We’ve been doing it for ages; now we have better tools.

But there is a difference between putting your best face forward and assuming an entirely different one. Catfishing is reprehensible, make no mistake about it, but I’d be lying if I said I couldn’t understand their motives. Exhibit A stares back at me through the camera lens and my past actions often haunt my dreams. I have contacted the websites and most of the pictures of me have been removed, but there is still an active profile on Plenty of Fish with my likeness. I have toyed with the idea of setting up a fake profile, posing as someone else and ensnaring him. But I can’t. That’s not me.

William Dameron is the author of "The Lie: A Memoir of Two Marriages, Catfishing and Coming Out."