What populist revolution? So far Donald Trump is supercharging the failed Republican policies of the past 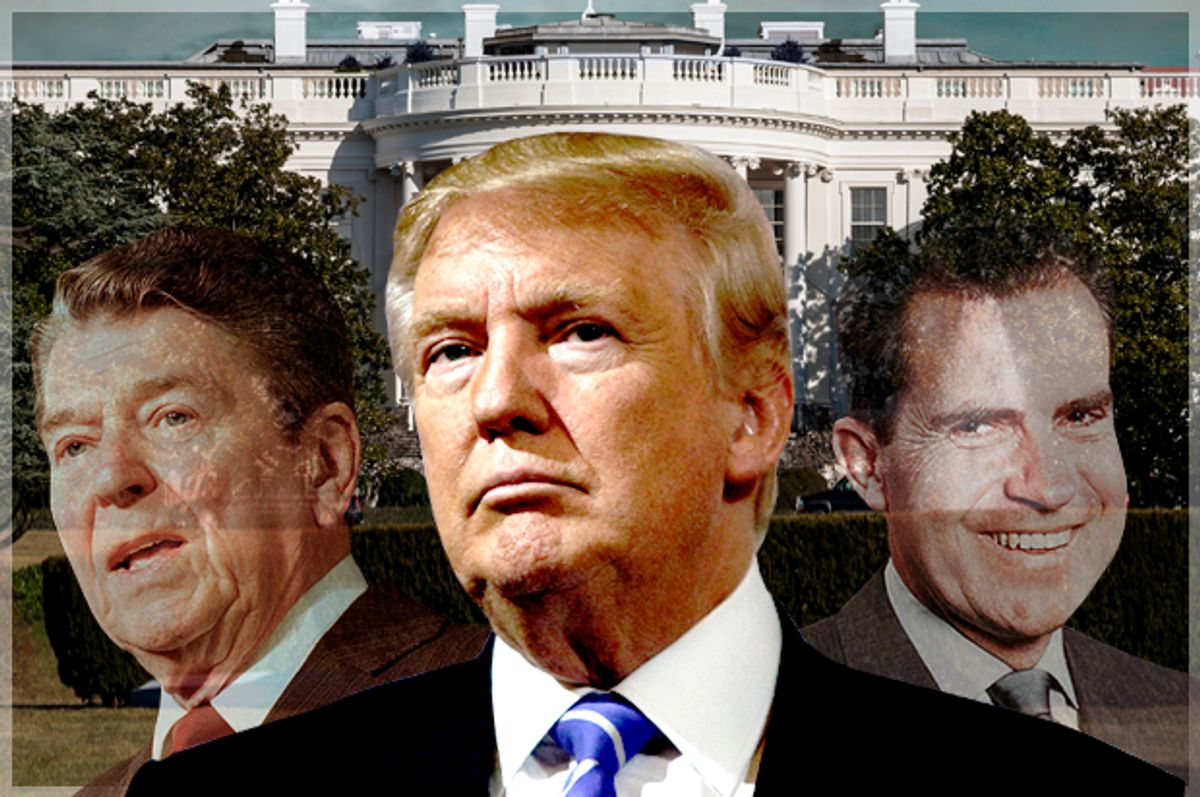 Donald Trump’s threat to American democracy is both self-evident and real. But as more and more evidence accumulates, it’s equally clear that he’s less of a radical departure from the conservative past than an extension of it. In effect, Trump is an adaptation to the peculiar twin realities of conservatism: its policy failures and its political success. Almost every right-wing policy has backfired: trickle-down economics, “free trade,” neocon warmongering and the various fronts of the culture wars. Yet Republicans control both houses of Congress and a large majority of state legislatures.

Trump’s visibly something different from previous Republican leaders, to be sure. But that’s a recurrent feature of conservative politics, as Corey Robin argued in his book "The Reactionary Mind" and echoed on Salon last March:

Outsiders like [Edmund] Burke or [Margaret] Thatcher — even Donald Trump, who’s never been a Republican, much less an officeholder — have always been necessary to the right. They know how the insiders look to ordinary people — and how they need to look.

The whole point of such outsider rejuvenations of conservatism is to reinforce the defense of hierarchy ever more deeply. That’s exactly what’s becoming clear with Trump, as the outlines of his probable policy direction are starting to emerge through his top-level appointments. While many Trump appointees are unorthodox — because they lack experience or have long personal relationships with the president-elect — there are few indications that he'll change direction from past conservative policies. He is more likely to accelerate and even supercharge them, acting as a typical conservative rejuvenator.

This can be seen in three broad patterns across multiple appointments. First, as I detailed in another recent article, Trump has appointed an unprecedented number of people to head departments and agencies whose mission or very existence they oppose. That intensifies a conservative strategy that began with President Ronald Reagan and that reflects a conservative hostility not just to the New Deal and Great Society policies, but even to the preamble of the Constitution, with its idea that government should promote the general welfare.

Second, foreign policy, Trump’s appointment of multiple generals to top posts underscores his avowed militarism. That speaks to a deeper continuity with past conservative outlooks than his superficial attacks against Bush-era neoconservative misadventures. His hostility to China is consistent with the neocon agenda, as is his courtship of Russia, which serves fossil fuel industry interests as well.

And third, on economic policy Trump shows no signs of diverging from Reagan's trickle-down legacy, despite his populist campaign bluster. Aside from his tax plan itself, nothing says trickle-down economics more loudly than the most plutocratic Cabinet in history. With Trump's promise to only appoint anti-choice Supreme Court justices, Trump has already satisfied the religious right. In short, this pattern of appointments basically assures that all the major elements of the conservative movement will be satisfied. A closer look should make this clear.

Several Trump appointees clearly oppose the missions of the departments or agencies they’ve been selected to head: Scott Pruitt has battled the Environmental Protection Agency he's been selected to lead in court on multiple fronts for the fossil fuel industry.

Ryan Zinke, tapped for the Department of the Interior, has a 3 percent voting record from the League of Conservation voters and has been identified with the "Congressional Anti-Parks Caucus."

Andy Puzder, picked for the Labor Department, has praised robots as ideal workers and has a long history of allegations that he cheated his managers out of overtime pay.

Betsy DeVos, in line to head the Department of Education, is a leading advocate of privatizing education, without oversight or standards.

Jeff Sessions, who's been selected for the Department of Justice, has a racist history that disqualified him as a federal judge in the 1980s.

And Rick Perry, chosen for the Department of Energy, campaigned on eliminating the department in 2012, though he forgot its name in his famous "oops!" moment.

On foreign policy, Trump’s appointments of former military officers send strong signals of conservative continuity. That was somewhat visible in Trump's campaign, when he boasted about his love of the military and also said he was the best bet to keep America out of unpopular foreign wars. As faith in public institutions has eroded, trust in the military remains relatively high — which warns of a potential authoritarian drift, in sync with conservatives’ hawkish worldview:

Former general Michael Flynn, Trump’s pick as national security adviser, known by staffers for his conspiracy-theory “Flynn facts,” is notoriously unsuited to a position that is supposed to integrate and harmonize the views of 17 different intelligence agencies.

Retired general James “Mad Dog” Mattis, Trump’s pick to run the Pentagon, is widely praised as a stabilizing influence. But his nomination violated the principle of civilian governance of the military and required a waiver of federal law, which the GOP steamrolled by tying it to a must-pass budget bill.

Former general John Kelly, tapped to head of the Department of Homeland Security, would likewise move this country toward a model of authoritarian governance, as Rachel Maddow noted: “Democracies don't use their militaries to control their own people. . . . Putting a military leader in charge of domestic security, that's something that non-democracies do a lot of, but other democracies don’t.”

Collectively, these choices are deeply worrying — unless you’re a hardcore conservative, in which case they should tickle you pink.

There are, of course, two major conservative beefs with Trump: his attack on George W. Bush’s Iraq War and his embrace of Russia and Vladimir Putin. Neither may be as fundamental as they seem, particularly if we consider how much conservative dogma has shifted in the past. Trump’s real purpose in falsely claiming to have opposed the Iraq War in advance was to kill two birds — rivals Jeb Bush and Hillary Clinton — with one stone. Trump has always been focused first and foremost on personal battle; the means for doing that have always been secondary.

This is reinforced by his selective embrace of Bush-associated, neocon-friendly figures like Rudy Giuliani and John Bolton, as well as his nomination of his bankruptcy lawyer, David Friedman, as ambassador to Israel. Friedman may be a classic unqualified Trump-crony appointment, but he’s also a hard-line neocon’s wet dream, described by The New York Times as "a dangerous choice" who "hold[s] extremist views that are radically at odds with American policy and with the views of most Americans" — including most American Jews.

As for Trump’s embrace of Russia and Putin, it would be wise to recall Richard Nixon’s opening to China, not because Trump is any sort of world-strategy chess player like the former president, but because the game itself is changing, as it did in the early 1970s. Nixon belatedly realized that Vietnam-style wars couldn’t be won, so he decided to strike a deal with China and play Chairman Mao's regime against the Soviet Union, thus undermining outside sources of support for any such future wars.

Trump’s embrace of Russia is driven, however unconsciously, by pragmatic concerns: He shares the overriding neocon preoccupation with China as a rising hegemonic power that threatens American dominance of the 21st century. “Raising U.S. military strength in East Asia is the key to coping with the rise of China to great-power status,” argued the landmark 2000 neocon report “Rebuilding America’s Defenses.” Nothing remotely similar was argued regarding Russia.

What was true then is even more so today: As of 2015, according to the World Bank, the U.S. and China had the world's largest economies, with gross domestic products of $18 trillion and $11 trillion, respectively. Russia was far behind in 13th place with $1.33 trillion, trailing not just other major powers but also Canada, Brazil, South Korea and Australia. Despite its relatively small economy, Russia is economically yuuuge in one respect: As a petroleum producer, which provides the second pragmatic reason for Trump’s embrace of Russia and a link to the third set of issues, economic policy.

As futurist Alex Steffen recently explained, vast amounts of the world's carbon reserves can never be tapped, so their pricing represents a "carbon bubble" analogous to but even worse than the subprime housing bubble. "The Carbon Bubble will pop," Steffen wrote, "not when high-carbon practices become impossible, but when their profits cease to be seen as reliable.”

To maintain the carbon bubble, an array of strategies are required: disputing the science of climate change, attacking global climate agreements, undercutting low-carbon alternatives and preserving fossil fuel subsidies. An administration dedicated to this range of strategies, Steffen wrote, “would look exactly like what we have now: a cabinet and chief advisors in which nearly every member is a climate denialist with ties to the Carbon Lobby.” That of course includes Exxon Mobil CEO Rex Tillerson as secretary of state, a man with close business ties to Putin, including a $500 billion deal that has been held up by sanctions. The shared interests of Russia and Trump’s fossil fuel backers (as opposed to the future of all humanity) could not be clearer.

This brings us to the heart of the economic policy area. As a metaphor, Trump's Carrier deal — and how quickly he shifted to attacking workers and their local union president — perfectly distills the difference between his "populist" campaign rhetoric and the reality of the same old crony capitalism he supposedly ran against.

Beyond that warm-up drama, Wall Street insider appointments such as Steve Mnuchin to serve as secretary of the treasury and Wilbur Ross as secretary of commerce echo the substance of Trump’s tax plan, which is heavily tilted to benefit those making over $1 million a year, while increasing taxes on millions of single parents who are least able to afford it. His vaunted infrastructure plan is shaping up as yet another tax-cutting scheme: big tax breaks for investors, guaranteed profits for contractors and increased user fees. In other words, a de facto regressive tax increase will be imposed, to pay it all back in the decades ahead.

Meanwhile, Trump's promises to protect Social Security, Medicare and Medicaid are directly contradicted by his appointment of Tom Price, an advocate of widespread cuts and privatization, to head the Department of Health and Human Services. In short, once you cut through all the smoke and mirrors, Trump shows no signs at all of diverging from Reagan's trickle-down legacy.

Will any of this work? Of course not. It never worked in the past, which is largely how we wound up with President Donald Trump. The larger question is whether Republicans will be able to shift the blame onto Democrats when it all falls apart. And shifting the blame and displacing righteous anger are Trump's greatest skills.