Donald Trump has apparently relaunched the global nuclear arms race — on Twitter, and out of sheer blinding idiocy 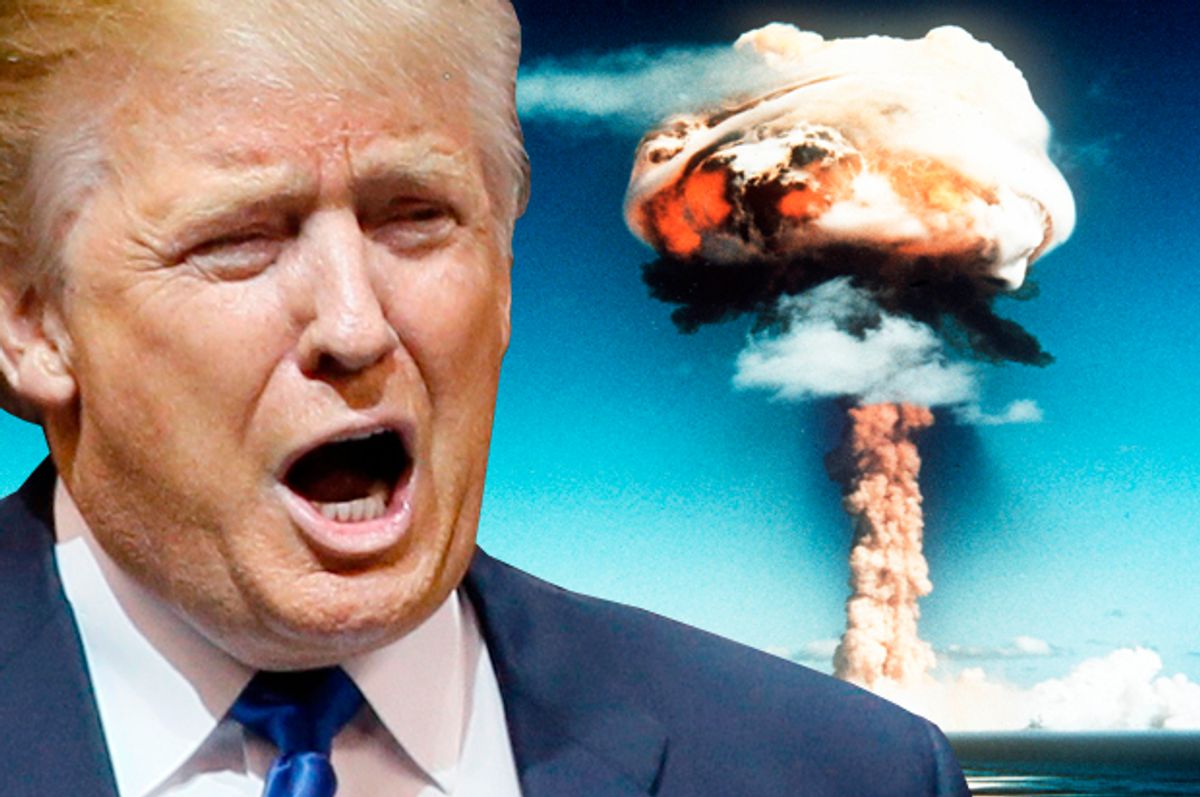 You might not know about the other Jon Favreau. There’s the director and producer who made the "Iron Man" movies, and then there’s the historically brilliant speechwriter who helped Barack Obama craft some of his most memorable speeches. The latter Favreau reacted to Donald Trump’s unbelievably irresponsible remarks about launching another nuclear arms race by tweeting this: “A fitting end to 2016/the world: we learn of Donald Trump's nuclear arms race from a couple of cable talk show hosts in their pajamas.”

Tragically accurate. MSNBC’s Mika Brzezinski and Joe Scarborough were dressed in pajamas on the set of their Christmas morning-themed show -- apparently the most insufferable Christmas morning ever staged. But, yes. In a breaking news exclusive for her show, Brzezinski revealed that Trump spoke to her personally and clarified his tweet about expanding our nuclear stockpile, saying, "Let it be an arms race. We will outmatch them at every pass.”

As with everything Trump blurts, the details and motives are murky. And that’s where the crisis truly begins. It’s unclear who “them” happens to be. In fact, nothing is clear other than the fact that Trump has twice pledged to resume the development and construction of new nuclear weapons for the first time since the George H.W. Bush presidency. Even then, the overall goal was for nonproliferation. Worse yet, the non sequitur nature of the original tweet makes us wonder whether this was triggered by an otherwise unknown national security event, or was just pure whimsy.

I’m going with whimsy. Based on Trump’s erratic, destabilizing behavior so far, the most likely conclusion is that Trump just woke up the other day -- with crackpot war-hawk Mike Flynn lurking creepily in the shadows like Trump’s personal Wormtongue -- and decided that it’s time to start making more nuclear warheads.

We should have seen this coming. Voters and the political press alike should have been more diligent in applying the Cuban Missile Crisis test to Trump. Specifically, how would President Trump handle such a crisis, and what would be the most likely outcome? The only time nukes were ever really mentioned, the story was either seen as just another political zinger, as was the case with Hillary Clinton’s “bait him with a tweet” line, or it became lost in what my friend and radio host Stephanie Miller calls Trump’s “tennis ball machine” -- just another chunk of Trump insanity whizzing past our heads seconds before some other thing launches out of the machine.

In August, it was Trump confessing that he doesn’t understand why we don’t use our nuclear weapons. Prior to that, we learned during a televised CNN debate between the Republican presidential hopefuls that Trump didn’t know what the "nuclear triad" was. Just about a year ago, conservative radio talk show host Hugh Hewitt asked Donald Trump about the triad, which is, cutting to the chase, the term defining the three systems the U.S. military uses to deploy and launch nuclear warheads: submarines, silos and bombers.

Trump had no idea what Hewitt was talking about.

After struggling to get a straight answer out of Trump about nukes, Hewitt asked, "Of the three legs of the triad, do you have a priority?"

Trump replied, "To me, I think nuclear -- the power, the devastation is very important to me."

That was his actual answer. "To me, I think nuclear -- the power, the devastation is very important to me." He obviously had no idea what Hewitt was asking him, and not unlike an unprepared high school kid BS-ing his way through a teacher's question, he delivered this nonsensical answer about the power and the devastation -- that "nuclear" is the most important aspect of the, you know, nuclear triad. I suppose "nuclear" is a vital part of the triad because, without it, it's not a nuclear triad. But that’s not the answer Hewitt was looking for. Trump might as well have blurted another of his "bing bing bong bong" runs. His response was almost that incoherent.

Fast-forwarding to last week, during what’s usually the high point of the holiday season, we learned that Trump was serious when he hinted that his administration would be decidedly pro-nukes, signaling another major shift in U.S. foreign policy, along with Trump’s open conversation with Taiwan in defiance of China. Any one of those two doctrinal shifts is massively destabilizing. Kingston Reif, director for disarmament and threat-reduction policy at the Arms Control Association, called Trump’s nuclear talk “a very concerning and destabilizing symbol for the rest of the world.” The repercussions of the U.S. suddenly resuming the construction of both warheads and delivery systems will last for decades, provided the destabilization doesn’t touch off a nuclear confrontation that incinerates everyone.

By the way, it’s important to note here that when a foreign power, be it a nation-state or a terrorist group, decides to test Trump on his unearned bravado and unprompted nuclear saber-rattling, it won’t just be Clinton voters who will be hit. Trump voters will be killed, too. Yet the Trumpers are hubristically applauding every kneejerk Trump decision, no matter how ill-conceived, including this emerging nuclear crisis, as if they will somehow be immune. It’s worth noting that many of our nuclear silos are located in red states near pro-Trump towns. Just because their candidate won the election, Trump supporters seem to believe they’ll be shielded from the economic instability and international conflict precipitated by Trump’s irresponsible and inexplicable behavior. They won’t be.

Rather than focusing on what could be the darkest, most destructive aspect of the Trump administration, not to mention the darkest chapter in U.S. history since September 2001, few of us maintained any level of outrage over the reality that Trump would be handed the launch codes for our nuclear stockpile; that he’d signal the capacity to actually re-engage the anachronistic policy of building more nukes; and that he’d announce such a policy via a social media platform, where nuance goes to die in under 140 keystrokes.

We never really discussed what that would mean. We never talked about how our friends and enemies alike might respond by building more nukes themselves, with perhaps new members of the nuclear club emerging on the other side. We never talked about whether Trump’s loose talk about proliferation would trigger a terror group to acquire fissile material for a suitcase bomb. We never talked about whether Trump might resume above-ground nuclear tests -- oh, and I believe he’ll do that, too. I’m not willing to bet on it yet, but it’s becoming increasingly obvious that we’ll see a mushroom cloud sometime in the next few years, either in a preemptive attack by Trump against whomever, or via an above-ground test intended to send a signal to anyone who makes fun of Trump’s fingers.

If this seems alarmist to you, you might not be paying attention to Trump’s berserker monkey-with-a-machine-gun behavior over the last 18 months. He’s still a few weeks away from being inaugurated and he’s already threatened China and declared that we’d start cranking out nuclear weapons. On Twitter.

The American people and the political press, comfy in our jammies, busily augmenting our personal social media brands using our Chinese-made digital toys, failed to stop this madness when given the chance. The irony is that we’ll be the ones who will pay for our own lack of thought and foresight -- it’ll be the American people, Trumpers and Hillarybots alike, who will pay dearly for choosing a president based on personal grievances and Russian deception rather than thoughtful consideration of what might happen when a catastrophically destabilizing villain sits down behind the Resolute Desk.