Now all news is "fake news": The right's war against truth goes back long before 9/11 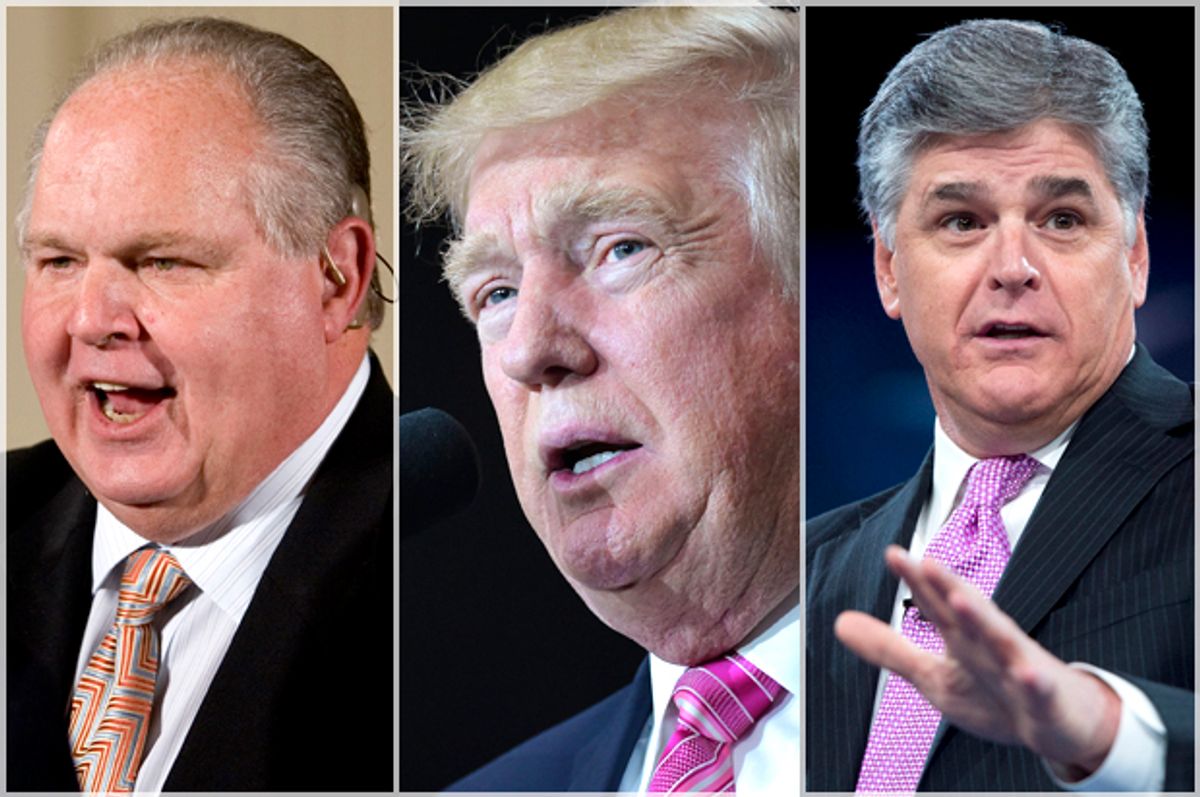 Conservatives are trying to give us all a headache -- and not just by taking away our health insurance and worshipping Donald Trump. They are launching an attack on the concept of reality itself. This is not entirely new, of course. The right has made good use of propaganda and the old "you can believe me or you can believe your lying eyes" routine for many years.

Recall that back in the early 2000s, many of us were alarmed to see Iraq war propaganda making its way into the mainstream, eagerly passed on by major newspapers and cable news shows. The people pushing the attack had a long history of advocating for the invasion before 9/11 and had even made clear they were hoping for a pretext. Nonetheless, in those days of compulsory patriotic flag-waving the media showed no inclination to be even slightly skeptical, and the result was catastrophic.

Even as news was filtering out that the case against Saddam Hussein for supposedly aiding Osama bin Laden was thin to the point of nonexistence, top leaders such as Dick Cheney were blithely asserting that they had proof. The media largely took them at their word. When it became obvious that Saddam's WMD cache did not exist, many on the right simply insisted that it did. This 2015 poll from Fairleigh Dickinson University shows that tons of people still believe it:

Overall, 42 percent of Americans believe that U.S. forces found active weapons of mass destruction program in Iraq. Republicans are more likely to hold this belief than Democrats: Fifty-one percent of Republicans think it’s “probably” or “definitely” true that an active program was found after the 2003 invasion, with 14 percent saying that it was definitely true. Still, large portions of other groups think that the WMD program, a major part of the justification for the invasion, was actually found, including 32 percent of Democrats.

It was a confusing time. But war propaganda is hardly unprecedented and America has deployed it as often as any country. From the Hearst yellow journalism that ginned up support for the Spanish-American War to the Gulf of Tonkin incident in Vietnam, the United States government used such tactics to gain public support for wars overseas.

The first Gulf War featured one of the most blatant examples ever when the first Bush administration hired the P.R. firm Hill & Knowlton to help them sell the war. According to John R. MacArthur's book "Second Front: Censorship and Propaganda in the 1991 Gulf War," their focus groups showed that there was a particularly vivid storyline that worked: the mistreatment of infants.

So at a hearing prior to the vote, Rep. Tom Lantos, D-Calif., and Rep. John Porter, R-Ill., called a 15-year-old Kuwaiti girl named Nayirah before the Congressional Human Rights Caucus. The distraught young woman testified about a terrifying event at a Kuwait City hospital. She said, "I volunteered at the al-Addan hospital. While I was there I saw the Iraqi soldiers coming into the hospital with guns and going into the room where 15 babies were in incubators. They took the babies out of the incubators, took the incubators, and left the babies on the cold floor to die."

From that point on the "babies yanked from the incubator" story was emblematic of the viciousness of Saddam's troops. I personally knew people who were moved into supporting the war because of it. And it was a lie. The young woman who testified was not some anonymous Kuwaiti candy-striper but rather a member of the royal family whose father was the ambassador to the U.S. When human rights organizations investigated later, they could not find that she had any connection to the hospital, or any evidence that any incident of that kind had happened at all.

Back in the 1960s, when the modern conservative movement was birthed in the wake of Barry Goldwater's presidential campaign, one of the Republican explanations for that defeat was that the media had a liberal slant. This grew into a bedrock belief over the next decade as the Watergate scandal unfolded. By the time Reagan came to power in 1980, it was being deployed as an organizing principle.

Conservatives learned to challenge the media's alleged liberal bias as a tactic to make reporters leery of any news that reflected negatively on conservatives. It was very effective. By the time right-wing talk radio came along and later Fox News, with its pretensions of being "fair and balanced," conservatives had convinced millions of people that their version of reality was the truth and that mainstream media and major newspapers were all catering to the liberals.

It succeeded in making conservatives uniquely subject to misinformation and right wing propaganda. Now they are deploying a new tactic. Jeremy Peters of the New York Times reported on Monday that the likes of Rush Limbaugh and Sean Hannity have cleverly rebranded the mainstream media once again. It's no longer the "liberal media." It's now "fake news" -- the online phenomenon that emerged in this election cycle to foment clicks, profits and chaos for a variety of reasons.

In defining “fake news” so broadly and seeking to dilute its meaning, [conservative commentators] are capitalizing on the declining credibility of all purveyors of information, one product of the country’s increasing political polarization. And conservatives, seeing an opening to undermine the mainstream media, a longtime foe, are more than happy to dig the hole deeper.

“Over the years, we’ve effectively brainwashed the core of our audience to distrust anything that they disagree with. And now it’s gone too far,” said John Ziegler, a conservative radio host, who has been critical of what he sees as excessive partisanship by pundits. “Because the gatekeepers have lost all credibility in the minds of consumers, I don’t see how you reverse it.”

It is going to be a very difficult task. The right-wing media complex is all-in on this. According to the Times, everyone from Laura Ingraham to Erick Erickson to Donald Trump himself is labeling anything they disagree with, including the fact-check sites like Snopes or Factcheck.org, as "fake news." Millions of people have been conditioned to believe their claims for years, which means polarization is only likely to get worse. If Americans can't even agree which facts are real, it's hard to see how we're going to be able to govern ourselves.