The invention of the white working class: The phrase of the year is racist hogwash

The is a dog whistle, not a demographic 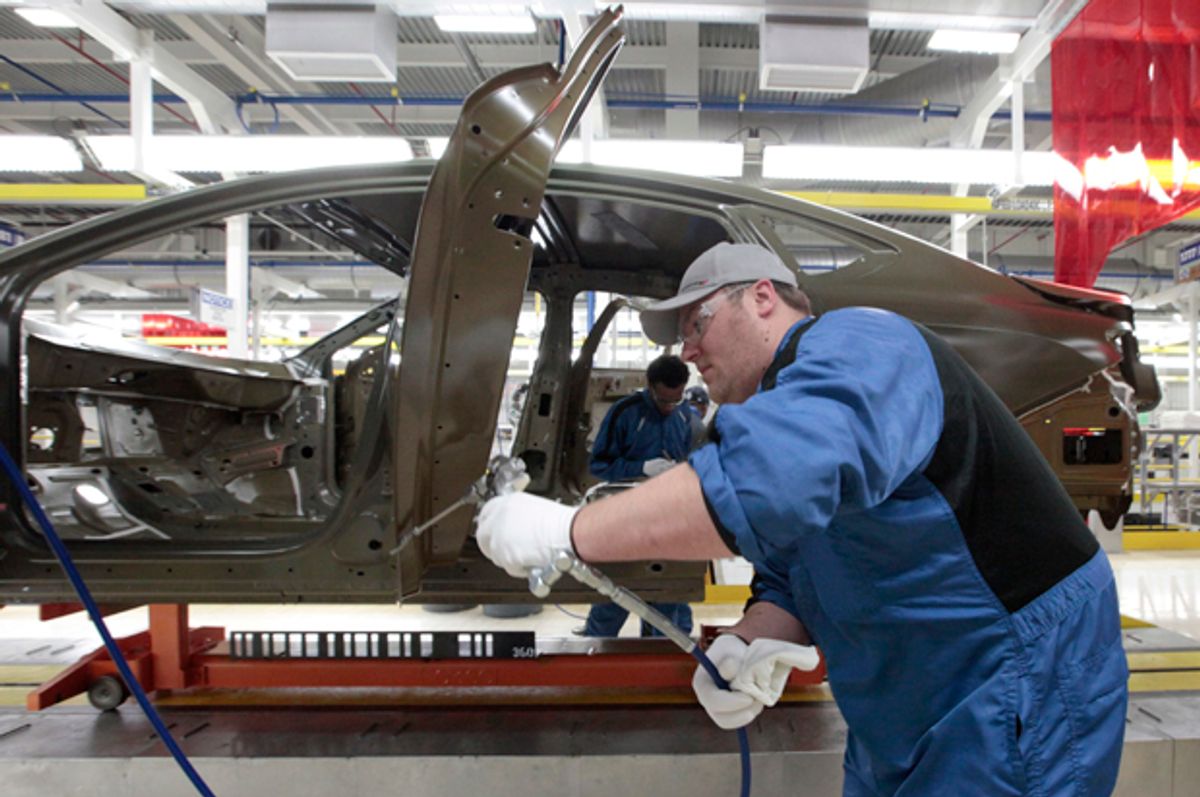 History warns us to be very, very careful when using the phrase "white working class." The reason has nothing to do with political correctness. Rather, it concerns the changing historical definitions of who is "white."

Eduardo Porter in the New York Times, uses this construction to ask, "Did the white working class vote its economic interests?" He claims that current data shows white people losing out to blacks and Hispanics in getting their fair share of the new jobs created since 2007:

Porter further argues this is happening because blacks and Hispanics live mostly in the thriving urban areas while most white people live in declining rural areas.

Only 472 counties voted for Hillary Clinton on Election Day. But they account for 64 percent of the nation’s economic activity. The 2,584 counties where Mr. Trump won, by contrast, generated only 36 percent of America’s prosperity.

Porter therefore believes that the white working class flocked to Trump as a way to protest their economic decline.

But this conclusion is flawed:

What these studies and reports do accomplish however is to sound the latest dog whistle about race in America. They create an image in our minds of a coherent white working class, hunkered down in the declining manufacturing sector -- white rural workers who have needs and interests different from black and brown urban workers. In doing so, this image feeds into a long history of white working class creationism that divides working people by race.

An early instance of this process took place in the aftermath of Bacon's rebellion (1675), during which Nathanial Bacon united black slaves, and white indentured servants into a rebellious army against Virginia planter elites. (It was less than a noble enterprise in that Bacon wanted more government attacks against Native Americans.) After the rebellion was put down, plantation owners gave special privileges to poor whites in order to drive a wedge between them and black slaves. It worked.

A dramatic redefinition of "white" took place during the late 19th and early 20th centuries as mass immigration and colonialization expanded. So called race scientists studied cranial size and shapes, skin color, and hair texture to create a biology of race. By 1911, the U.S. Immigration Commission published its Dictionary of Races or Peoples, that listed 29 separate races. The Southern Italian race, for example, is described as "excitable, impulsive, highly imaginative...having little adaptability to highly organized society."

Race science defined "white" as a narrow category that excluded virtually everyone who didn't come from northern Europe. By the First World War, U.S. immigration policy was informed by early IQ tests given to immigrants on Ellis Island that supposedly showed that "87 percent of Russians, 83 percent of Jews, 80 percent of Hungarians, and 79 percent of Italians were feeble-minded."

These race scientists created a vast hierarchy of races seen in the chart below designed for a Pittsburgh steel company in 1926. It is based on the idea that each "race" by its intrinsic nature possesses certain skills and attributes that makes it suitable to certain work tasks.

This "science" provided the rationale for dividing the workforce by ethnic group which had the added virtue of weakening worker solidarity and keeping unions at bay. This became particularly acute after 4 million workers went on strike at the end of WWI. The largest strike involved 350,000 steel workers that finally collapsed after 14 weeks of pitched battles. It is highly likely that the skills chart was designed to prevent such a resurgence.

(One can only speculate why the Jewish "race" was placed at the bottom of the hierarchy. One reason may be because two of the largest unions in the country -- the Amalgamated Clothing Workers and the International Ladies Garment Workers Union were Jewish led and contained hundreds of thousands of Jewish immigrant workers. So if you hired Jewish workers into the steel industry, the odds were high they might be predisposed to unionism or be union plants.)

The whitening of America

A confluence of events rapidly changed the definition of white in the1930s and 40s. The rise of American industrial unionism successfully organized "unskilled" immigrant workers, blacks and Hispanics into broad-based unions. So much for the race chart.

The mobilization for WWII further melded together all the "lower" ethnic groups except for black, brown and yellow. And after the atrocities at the Nazi death camps were revealed, the earlier race science industry was thoroughly discredited.

What causes the definition of race to change?

The definition of "white" and of "race" in general depends on the needs of the most powerful elements of society. To justify slavery and Jim Crow, race science gave Southern elites a justification for denying human rights to millions with darker skin colors.

The "science" of the early 1900s created finely grained racial hierarchies that conveniently justified immigration restrictions and colonialism. Colonial powers argued that since their "race" was at the top of the ladder, they had the right and the duty to rule lesser peoples and their countries.

To successfully mobilize America against the "master race" and the "yellow peril" during WWII, American leaders permitted "white" to be broadened to include most of what previously had been considered lesser races. (However, racist South Democrats and their lock-down control of Congress, made sure that black and brown people were denied New Deal benefits and therefore would continue to suffer as separate races. The Japanese interment camps further heightened the idea of a separate race of "Orientals.")

So what color is Obama?

That kind of question leads us to think about race as a biological as well as a sociological category. Skin color is real biology isn't it? And what about sickle-cell anemia?

But folk science is not real science. One in 13 African-American babies is born with a sickle-cell trait. Sickle cell trait can also affect Hispanics, South Asians, Caucasians from southern Europe, and people from Middle Eastern countries.

Similarly, every effort to construct a black or white race through genetics has failed. No one yet has found a gene that signals a separate race.

Here's a fact of life that may startle you. Eighty-five percent of all genetic variation is among people within a population and only 15 percent of the variation among humans is between different populations and continents. This means that any two black people chosen at random will have far more genetic differences from each other than a randomly selected white and a black person. Biologically speaking the old cliché is true: There is only one race -- the human race.

Over a century ago, W.E.B. Dubois put forth perhaps the clearest, most exact definition of race: "A Negro is a person who must ride Jim Crow in Georgia"

He understood, as should we, that race always is a social construction, a human invention used to create a hierarchy of power. It is not genetics. It is not biology. And in the case of the "white working class" it's not even accurate sociology.

When we invent the white working class, we whitewash an increasingly diverse manufacturing workforce. Take the workforce at Carrier, which is in the news because of Trump's effort to prevent its jobs from moving to Mexico. Isn't it a perfect example of a beleaguered and declining white working class in Indiana, looking to Trump for help?

No, the Carrier workforce is 50 percent African-American. Half of the assembly line workers are women. Burmese immigrants make up 10 percent of the employees.

Drop the dubious "white working class" construction and we'll see that Porter is asking the wrong question. It's not whether the imagined white working class voted for its own economic interests by voting for Trump.

Rather, the real question is this: Is it even possible for working people of all kinds to vote their economic interests given the corporate orientation of both parties?