Cowardly lions on parade: One after the other, anti-Trump Republicans have fallen in line behind the Great Leader

What conservative principles? Donald Trump humiliated his GOP opponents, and now they grovel before him 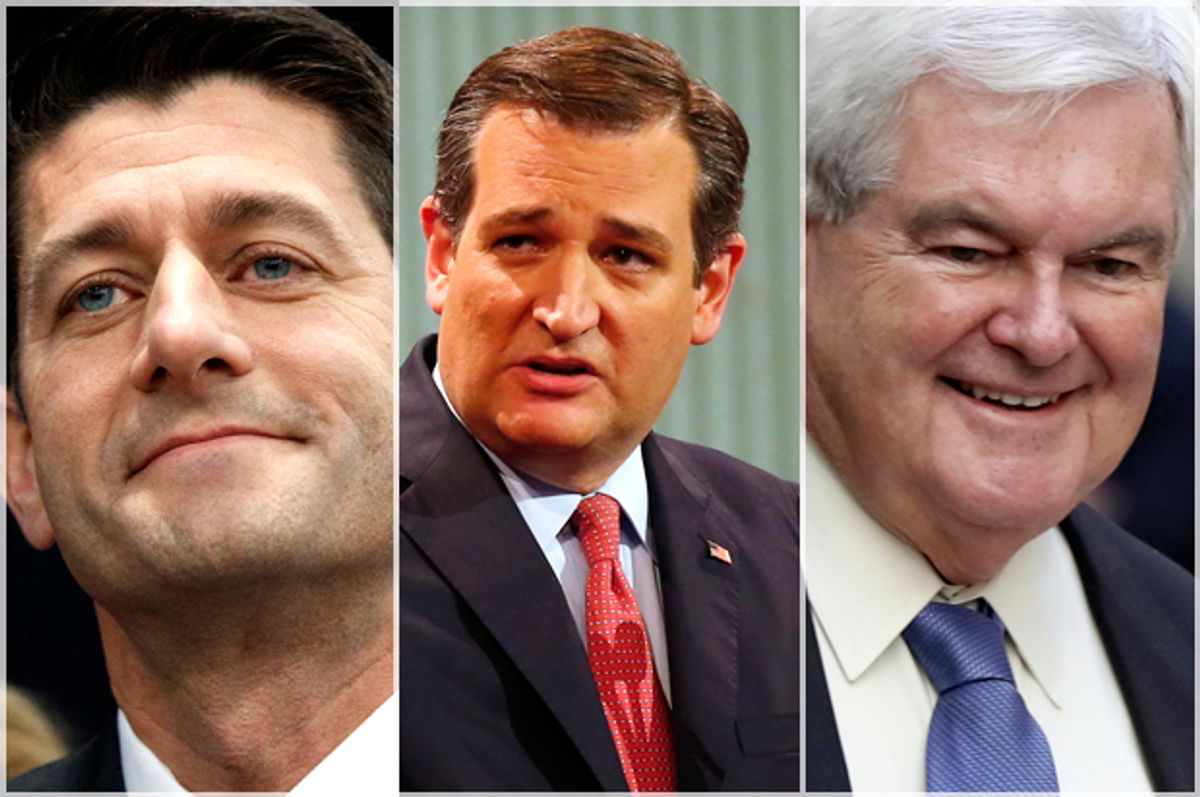 Like most political observers, I made a lot of wrong assumptions during the last campaign. While I always took Trump seriously and knew he could win, I was certainly convinced by the end of the campaign that Clinton had eked out a victory. But if I made one consistent error from the very beginning it was in thinking that members of the conservative movement actually had a core ideology, and that leaders of that faction would have too much pride to capitulate to an apostate like Donald Trump. At the very least I expected that a few of them would assume that a President Trump would fail spectacularly, and would cynically see a political opportunity in being one who saw it coming and stood tall.

There was a time when that assumption made a lot of sense. During the GOP primaries, when Trump was taking a meat ax to every one of his competitors, playing as dirty as anyone has ever played, it looked like a good bet that some of those people would find it hard to forgive him. Trump didn't just blaspheme against the Bible, he went even further and violated Ronald Reagan's 11th commandment --" thou shalt not speak ill of any fellow Republican" --  with relish.

He didn't just speak ill of them. He went after them like a 12-year-old bully in the lunchroom. Of Carly Fiorina he said  "Look at that face! Would anyone vote for that? Can you imagine that, the face of our next president?" He laughed at Chris Christie saying he "acted like a little child" when President Obama came to help with Hurricane Sandy. He called Marco Rubio "little Marco" and Jeb Bush "low-energy." He claimed that Ben Carson had a pathological temper and compared him to child molesters. He called Rand Paul ugly and said that he didn't get his father's appealing genes. At one of his rallies he claimed Lindsey Graham was "one of the dumbest human beings I have ever seen" and sent a tweet demanding that Graham "respect" him. He said Rick Perry should have to take an IQ test before being allowed into the debates. He said the way John Kasich eats is "disgusting," and wondered whether people wanted that in a president.

And then there was Ted Cruz, the man who kept Trump close to him throughout the early primaries, under the assumption that when Trump flamed out he would inherit his voters. It didn't work out that way and when it came down to the two of them, Trump turned on him so hard it left him sputtering. He called him "Lyin' Ted" and tweeted out an insulting image of Cruz's wife, comparing her unfavorably to his own wife, Melania the former model. Trump even accused Cruz's beloved father, a Cuban immigrant, of being involved in the Kennedy assassination.

These are just a few examples of the puerile, crude and vicious personal attacks deployed by Donald Trump against his Republican rivals. Indeed, he rarely engaged with them on policy at all. He dispatched his rivals with insults and taunts on a level never before seen in a presidential campaign. And with rare exceptions they rarely descended to his levels, despite surveys which indicated that attacking him on his personal character was the most effective.

Still, one would have thought that between his rude personal insults and his conservative apostasy on issues like Social Security and foreign policy, it would have been difficult for these GOP officials to forgive and forget, much less jump on board the Trump train. After all, for years they have made a fetish out of being men and women of "principle" who simply could not compromise their deeply held beliefs even if it brought the country to its knees. But lo and behold, they have suddenly found their inner pragmatists.

Marco Rubio, safely ensconced back in his Senate seat, has made his peace with his former tormentor. So has Jeb Bush, who recently penned an op-ed backing Trump's controversial choice for the EPA. Poor Chris Christie prostrated himself before Trump for months only to be ignominiously fired from his job as head of the transition. Nonetheless, he is reportedly waiting by the phone just in case Trump's inner circle fails him.

And others who either distanced themselves from the Donald's crudest behaviors during the campaign or even  outright condemned him are now groveling before him. Paul Ryan slickly tried to have it both ways and now the two are BFFs, appearing together before audiences where Trump makes it clear that he expects Ryan to toe the line and Ryan, the leader of one house of Congress in an equal branch of government, gamely grins and goes along. Poor old Mitt Romney tried to patch things up by agreeing to a humiliating public ritual in which Trump pretended to consider him for secretary of state, only to reject him after he'd issued a laudatory statement.

Former House speaker Newt Gingrich has been insinuating himself into the inner circle for some time and is usually quite careful about flattering the boss. But he made a mistake the other day by saying that Trump told him "drain the swamp" was just a "cute" campaign slogan and was forced to publicly admit that he "made a big boo-boo."

But the saddest of all the Republican supplicants is Cruz, the man who actually took a brave stand before the whole country when he appeared at the Republican National Convention and refused to endorse the nominee. That took guts and many of us thought it showed that Cruz either had more integrity than we thought or that he had wisely surmised that Trump was going to destroy the party and he would be there to revive it as the one true conservative.

But Cruz bailed along with the rest of them. He eventually endorsed Trump and is back to trolling as only he can. The man who nearly single-handedly shut down the government is warning that Democrats will become “obstructionists at a level we’ve never seen" because they've been "radicalized." He is positioning himself as Trump's Senate defender, the man who will fight the crazy lefties on his behalf. If he plays his cards right, the talk is that he might even get the nod for a Supreme Court appointment, which would be a smart move. He'd be a shoo-in since all his Senate colleagues would do anything to get rid of him.

Whatever happens, all of these once promising GOP luminaries and elder statesmen have made it clear. Trump can say and do anything and they'll tug their forelocks and say, "Thank you, sir. May I have another?"  It's his Republican Party now and they just live in it.