Donald Trump's perverted populism: His cabinet is based on the myth that the wealthy are more virtuous 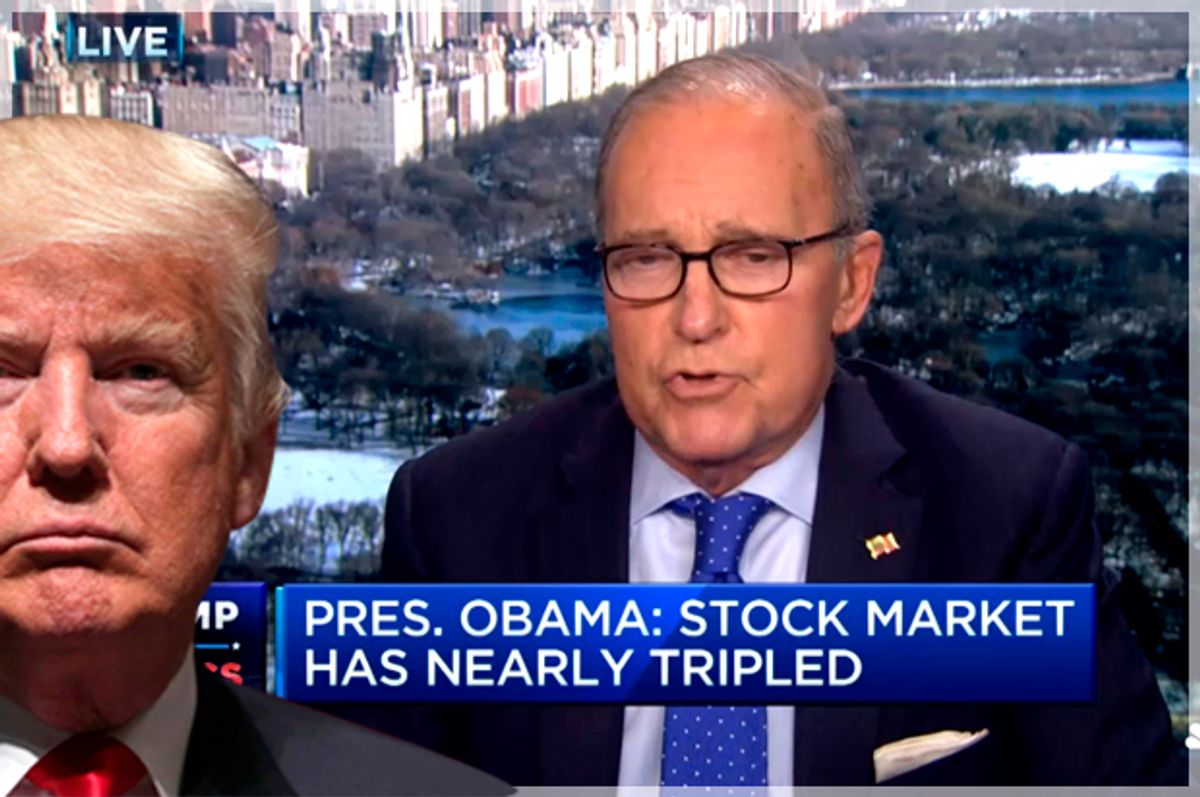 If forced to use just one word to describe President-elect Donald Trump’s cabinet nominees, it would have to be “rich.” The incoming administration will feature several billionaires in high-level government positions, along with a more pedestrian collection of multimillionaires, hedge fund managers, and tycoons of various flavors. The combined net worth of Trump’s cabinet picks comes out to more than$13 billion.

For the average person who believes that the interests of the wealthy are already absurdly privileged by government policy, an executive branch managed almost entirely by the ultra-rich feels like an accelerated descent into oligarchy. But for Larry Kudlow, the cable news pundit and pseudo-economist whom Trump is reportedly considering to chair the White House Council of Economic Advisers, a cabinet full of rich people is good because the wealthy, by virtue of their wealth, are honest people.

Here’s what Kudlow wrote in a National Review piece a few days ago:

Since the election, I have argued that the Barack Obama/Hillary Clinton war against business will come to an end, and that America will once again reward success, not punish it. And while the Left has demonized Trump’s cabinet appointees as a terrible group of successful business people, free-market capitalists such as myself regard this group as very good indeed.

Why shouldn’t the president surround himself with successful people? Wealthy folks have no need to steal or engage in corruption. Their business success demonstrates that they know how to achieve goals and convince skeptics that good deals can be made to the benefit of both sides. Isn’t this just what America needs?

“Wealthy folks have no need to steal or engage in corruption” is a ludicrous assertion on many levels. The first thing to point out is that this is a real-world expression of a satirical concept known as Worthington’s Law, which determines human worth according to a simple formula: More money = better than. It’s a joke that’s meant to expose the shallowness of valuing a person based on their personal wealth, but Kudlow is putting it out there as the unofficial motto of the incoming administration.

And, of course, the entirety of human history is studded with people who have amassed wealth through corruption and theft. Among the most prominent people in this category is the incoming president himself, who just recently agreed to an eight-figure settlement in a fraud lawsuit related to the fake university he founded in order to scam vulnerable people out of their life savings. The fabulously wealthy president-elect also admitted to violating self-dealing rules related to his charitable foundation, which is under investigation by the New York attorney general’s office amid allegations of corruption. Trump himself boasted on the campaign trail of throwing money at politicians so that they would do favors for him whenever he asked.

That gets to the faulty, childish logic at the heart of Kudlow’s argument. Of course rich people don’t “need” to steal or be corrupt. It isn’t a question of “need” at all. They steal and engage in graft out of greed, or simply because they feel (often rightly) that they can get away with it. By Kudlow’s ridiculous reasoning, a person who steals millions of dollars has done society a favor by making himself rich, thus curing himself of the “need” to steal.

The real problem here, however, is that this absurd argument carries a good deal of weight with non-rich supporters of the president-elect. When I talked to Trump voters during the campaign and asked them why they supported him, they would often respond with some version of “He’s not in this for the money; he’s already rich.” It’s a total non sequitur, yet you still see it popping up when reporters get reactions from Trump voters to the fabulous wealth of his cabinet nominees. “The guys he's putting in there, they don't need to do this. They're independently wealthy,” one Trump voter told the Associated Press earlier this month. “They don't need any more money. The motivation is to make pragmatic, rational business decisions. What could be wrong about that?”

The tragedy here is the misguided conflation of “he’s already rich” with “he’s looking out for my interests.” There is absolutely no reason to connect a person’s existing wealth with their desire to do what’s best for anyone but themselves. But the Trump orbit is invested heavily in this perverted form of populism that stipulates that wealthy elites are the only people who can be trusted to govern without the influence of greed.