Farewell, Carrie Fisher, a woman whose words were a force for good in the universe

Princess Leia made her a symbol, but Fisher's writing and unapologetic wit made her real in a way no film could 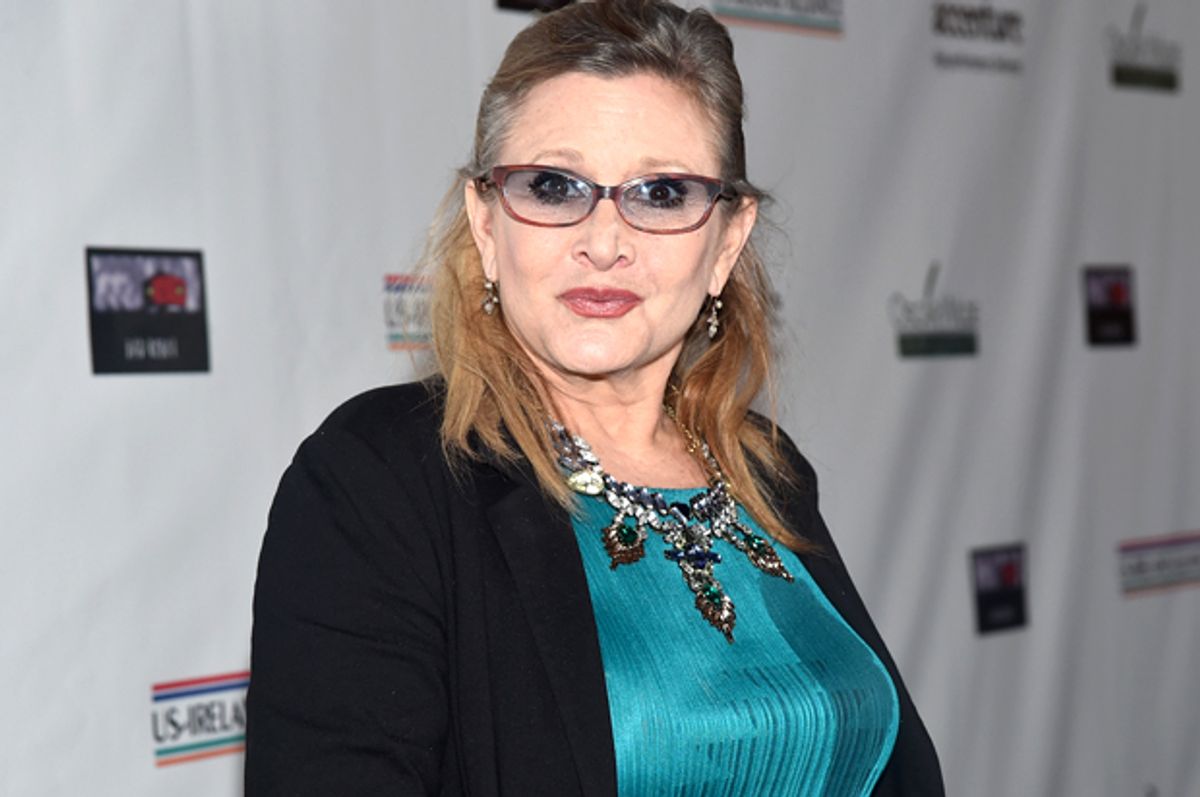 Carrie Fisher is my icon. Literally. My Twitter account features graphic artist Leka’s rendering of Princess Leia with a David Bowie lightning bolt across her face, arms crossed and fixed heat gaze staring out at the world above the words “Rebel Rebel.”  To me, it represented a handy cross between two of my great loves, the Star Man and “Star Wars,” and more specifically, its princess who ruined me for all Disney princesses by teaching me that true rulers master their own destiny by saving themselves.

But it’s also meant to be a shout of creative defiance in a world increasingly set on squelching artistic rebellion, an idea linked more to the actress herself than to the character for which she's beloved. The Imperial Senator from Alderaan may have exposed the world to Carrie Fisher, but her extraordinary writing, represented in novels such as “Surrender the Pink” and “Postcards from the Edge,” and memoirs, including “Wishful Drinking” and her latest, “The Princess Diarist,” revealed a saber-sharp wit and fearless sense of humor no one but the woman herself could accurately script.

“If my life wasn’t funny it would just be true,” she famously wrote, “and that would be unacceptable.”

Although Fisher starred in a number of films — her debut was 1975's “Shampoo,” and she also appeared in “The Blues Brothers,” “Hannah and Her Sisters” and “When Harry Met Sally” — and went on to ply her writing talents as a script doctor, Fisher is most closely associated with the image of Leia Organa in 1977's "Star Wars." She was 19 when she took on the role of a woman we met as a princess. Nearly four decades later, she was still playing Leia, only now as a general of the rebellion in “Star Wars: The Force Awakens.”

Where Leia Organa provided the visible pattern for girls who didn’t buy into the idea of waiting for a man’s rescue and validation, Fisher herself inspired writers to be unafraid of digging into the parts of us that ache, to give words and laughter to the universal truths that pain and circumstance can reveal. Writing her way through her life's darker scenes, including periods marked by heartbreak, addiction and mental illness, made Fisher exist in a fundamentally raw and genuine way that no onscreen role could capture.

“If you have a life like mine, then these experiences eventually accumulate until you become known as ‘a survivor.’ This is a term that I loathe,” she wrote in 2008’s “Wishful Drinking,” which she transformed into a one-woman show and an HBO documentary.

The news of Fisher’s death at the age of 60 has shaken people on a number fronts as we take stock of the deep chomps this horrible, Satanic sociopath of a year has taken out of our lives. The loss of Fisher feels as profoundly personal as it does universal, an ugly bookend to a year marked by gigantic lights snuffing out, beginning with the death of David Bowie last January.

Bowie’s passing marked the close of a meticulously chronicled story that had countless chapters, parts and guises, one whose resonance would be felt and honored long after its creator’s departure. The artist knew he was in the last stages of succumbing to cancer, though. He carefully planned his farewell statement to the world in the form of “Blackstar,” his final album.

Fisher's death represents the fragility of expectation.  The actress and author was known for her brash outspokenness, emphasizing the healing power humor and cleverness have over personal tragedy. And she departed suddenly, at the end of what should have been an ordinary flight home from London, where, according to Variety, she had been filming episodes of the Amazon/Channel 4 comedy "Catastrophe."

Last week, while sailing through the clouds, she suffered a massive heart attack and spent several days on life support before dying on Tuesday morning.

From all appearances, including her final televised visit to “The Graham Norton Show” recorded while she was in Britain, Fisher seemed well and ready to get in a lot more trouble. Her appearances in upcoming “Star Wars” chapters Episode VIII and Episode IX were a given; her demise reminds us not to take anything for granted,

Until this terrible week, she even had a starring role on our short list of 2016’s joys, providing salve for a flaming sphincter of a 365-day span by confirming the fantasy so many nerd girls and boys had hoped for over the years. “Did they?” we wondered, and she let us know that yes, they did.

The actors who played Princess Leia and Han Solo (that would be Harrison Ford, for those of us living under a rock) enjoyed a torrid affair in 1976. Ford was married at the time, but bygones! The story created such delight at a time when so many of us wanted to celebrate something, anything, that very few “tsk-tsked” the revelation. Thank you for that, Carrie.

Fisher’s acceptance of Leia’s pop culture resiliency and that role’s impact on her life and career decades after her work in “A New Hope,” “The Empire Strikes Back” and “Return of the Jedi” was not merely an act of submission. In embracing Leia, Fisher also acknowledged her and her character’s role as a figure of feminist empowerment, an impact that shapes the “Star Wars” universe even now.

Had Fisher not given such an indelible performance as Leia (even before and after that awful “Return of the Jedi” gold bikini so popular on the convention cosplay circuit) we would not have gotten Daisy Ridley’s Rey as the inheritor to the Jedi line. Nor would we have Jyn Erso (Felicity Jones) as the central hero of this season’s box office smash “Rogue One.”

The other side of that coin is that Leia’s enduring popularity forced to Fisher to turn into all the skids she encountered along the way. Between her parentage, her famously tumultuous marriage with Paul Simon, her  battles with substance abuse and her challenges living with bipolar disorder, Fisher's life was well-chronicled by tabloids.

One might argue that she would have had to contend with paparazzi and prying even if she had never been associated with “Star Wars.” Fisher was born into a specific part that ensured her years would not be marked by privacy and quiet; she was the daughter of actress and performer Debbie Reynolds and singer Eddie Fisher, who died in 2010. Fisher described the duo in “Wishful Drinking” as “the Brad Pitt and the Jennifer Aniston of the last ‘50s, only slightly moreso — because they actually managed to procreate.”

“You're not allowed to grow up with parents who are famous and then get into one of the biggest movies of all time and run around with famous people — it's resented after a while,” Fisher observed in a 1983 Rolling Stone interview. “And I would always try to emphasize something really wrong with me, so that people wouldn't be put off. There are a lot of epiphanies before you get to the satori, you know. And once it was proposed to me that it was all right to be like I am, I finally quit apologizing for it.”

For what? the interviewer, Carol Caldwell, asked. “For being something different. For being strong. Strength is a style. But this happens in acting a lot. If you pretend something over and over, sometimes it comes true.”

Fisher is survived by her brother, Todd Fisher, her mother and her daughter, actress Billie Lourd. Her legacy of strength, her incredible intellect, her emphasis on laughing in the face of despair and her rebelliousness survive her as well. All of that blends into our portrait of her as a heroine, both in a world that devastated by her departure, and the one that exists only in our imagination.