White supremacist Christmas! Right-wing media spent the holiday snuggling up to overt racism 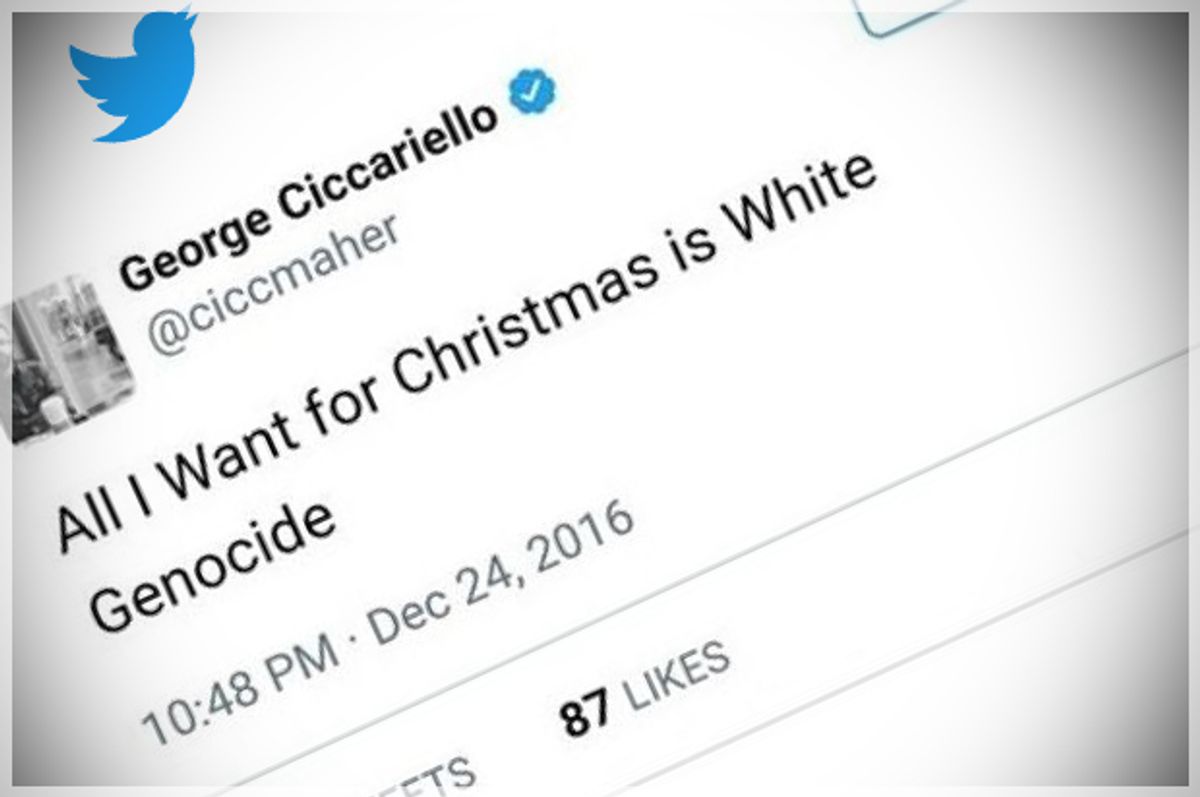 One of the biggest reasons to worry about Donald Trump's presidency, beyond all the terrible policies likely to be enacted, is the fear that it will embolden overt racists, and help mainstream overt anti-Semitism and white supremacy.

Unfortunately, events around the Christmas holiday suggest those fears have come to pass. White supremacists are getting bolder and their views are starting to gain traction in conservative media spaces that have large and relatively mainstream conservative audiences.

Right-wing media raising the alarm about a mythical "war on Christmas" has become a dark annual tradition, an opportunity for conservatives, aided and abetted by dishonest media sources, to convince themselves they're are being oppressed by Scrooge-like secular liberals who want to ban Christmas. The idea that there's a war on Christmas has anti-Semitic roots; Henry Ford accused Jews of trying to steal Christmas in his 1920s era article series titled "The International Jew." In recent years, the notion that Jews specifically are to blame for this persecution has been scrubbed from the annual right wing hysterics, and blame for the supposed war on Christmas has been laid at the feet of politically correct liberals. Anti-Semitism could be read in between the lines, perhaps, but it was almost never overt.

But this is the era of Trump, and so it should be no surprise that the subtext is becoming the text, and the anti-Semitism is becoming overt.

Centerville Elementary School in Lancaster, Pennsylvania, was forced to cancel its nnual production of "A Christmas Carol," reportedly because teachers didn't think there was enough time for rehearsals. But right-wing media outlets decided to blame a single Jewish family whose child attends the school.

Fox News  and Breitbart both ran alarmist stories about this cancelled school play, citing "unnamed" parents who supposedly complained about the line "God bless us, everyone." While the Fox story noted that officials "said they dropped the play from their schedule because it takes too much time out of teaching academics." it was clear that the story was meant to fit into the "war on Christmas" narrative — why else would a cancelled school play be worthy of national news attention? Unsurprisingly, commenters at Breitbart grew threatening towards the Jewish family, posting the school's address of the school and suggesting that the family's should be exposed as well.

Breitbart News also spent Christmas trying to mainstream the white supremacist concept of "white genocide." White supremacists spend a lot of time pushing the belief that multiculturalists and anti-racists are trying to commit genocide against white people by breeding them out of existence. (That's one reason they have such a hateful obsession with interracial relationships.) Over the Christmas holiday, Breitbart found an excuse to introduce the concept of "white genocide" into their coverage, by attacking a Drexel University professor who tried to mock white supremacists.

On Christmas Eve, a leftist political theory scholar at Drexel named George Ciccariello-Maher sent out a now-legendary tweet saying, "All I Want for Christmas is White Genocide." He was clearly joking, tweaking the noses of white supremacists who have developed this paranoid belief that there is such a thing, but Warner Todd Huston at Breitbart pretended to take Ciccariello-Maher seriously, writing, "The professor’s Twitter feed is filled with hateful, obnoxious messages, anti-Americanism, slams of President Donald Trump, attacks on Jews, as well as pro-Black Lives Matter and pro-communist sloganeering."

That Brietbart article was a clever way to soften up the larger conservative audience to this white supremacist idea. By pretending this joke was a serious call for killing off white people, Huston can imply that "white genocide" is real. Propping up a standard villain -- a left-wing academic -- and making it about "political correctness" helps ease the audience into buying into a narrative that previously only existed in fringe far-right circles that openly embrace racism.

This is how white supremacists operate: They tell stories about how white Christians are supposedly under assault from Jews and people of color, which in turn allows them to justify their racist views as a form of self-protection. Now those narratives are getting louder in mainstream conservative spaces.

Even Bill O'Reilly, who has generally been careful about not appearing overtly racist, rolled out the white supremacist claim last week that calls for equality are an attack on whiteness itself.

"Summing up, the left wants power taken away from the white establishment," O'Reilly said on his Fox News program.

“The left sees white privilege in America as an oppressive force that must be done away with,” he added. “Therefore white working-class voters must be marginalized, and what better way to do that than center the voting power in the cities?"

That argument is indistinguishable from what overt hate groups are saying: Calls for more equitable power-sharing should be understood as an attack on white people. While O'Reilly didn't go near the "white genocide" claim, his rant shares the same logic, that racism is justified because white people are supposedly being victimized.

This paranoia is being deliberately stoked by Trump and his team. When some journalists criticized Trump's incoming White House chief of staff, Reince Preibus, for a Christmas press release that seemingly equated Trump and Jesus Christ by saying, "this Christmas heralds a time to celebrate the good news of a new King," Republican spokesman Sean Spicer pretended the critics were attacking Christianity.

This reaction echoed a previous Trump press release that characterized the Christmas market attack in Berlin as a direct assault on Christians. As with the "white genocide" arguments, the purpose is to portray white Christians as an oppressed group and to argue that racist attitudes and actions can be justified as self-defense.

Again, none of this should be a surprise. Of course elevating an overt racist to the White House makes other racists feel that they have public support to come out and share their ugly views with the world. Unfortunately, there's every reason to believe that Fox News and Breitbart will continue down this path, so long as they continue to make political gains from wallowing in ever-bolder racist rhetoric.