Flush with victory, the House speaker may actually have gone too far in a new effort to squash all opposition 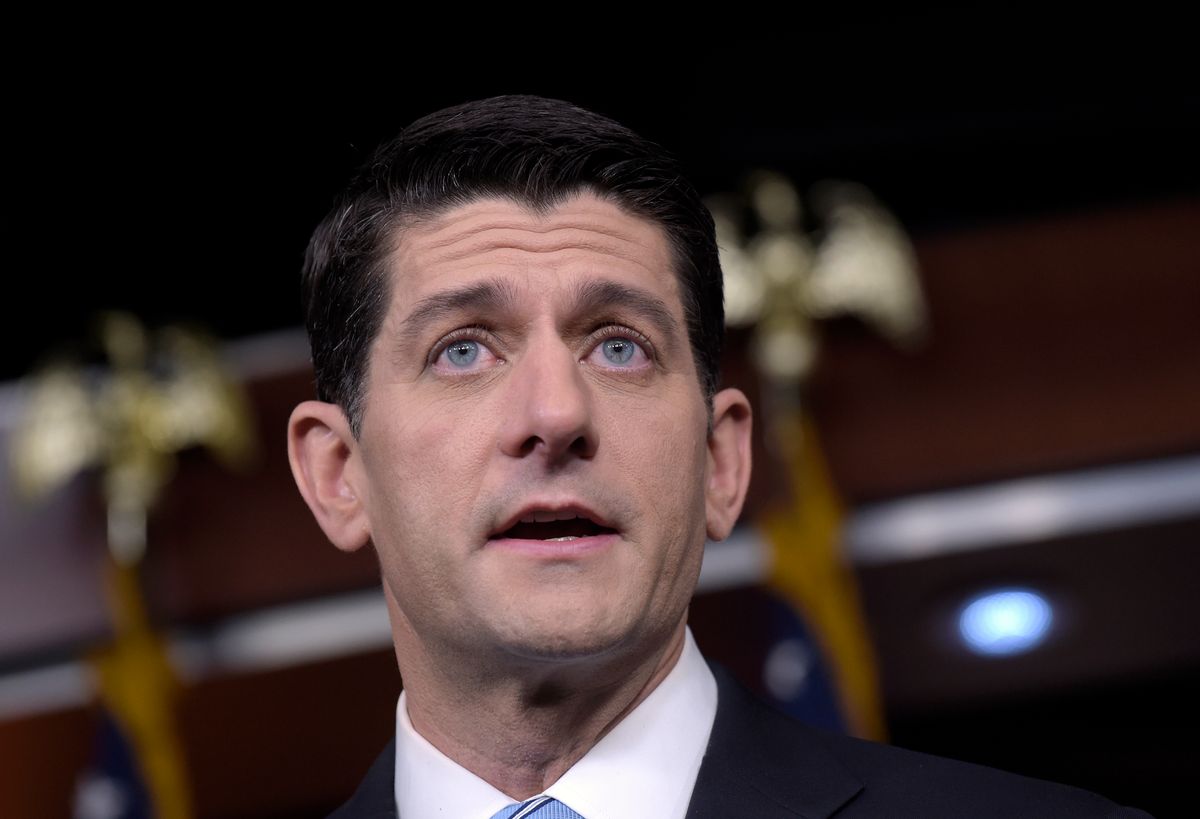 FILE- In this Dec. 1, 2016, file photo, House Speaker Paul Ryan of Wis., speaks during a news conference on Capitol Hill in Washington. Republicans are eagerly planning initial votes next month on dismantling President Barack Obama’s health care law, a cherished GOP goal. “There needs to be a reasonable transition period so people don’t have the rug pulled out from under them,” Ryan told reporters last week. (AP Photo/Susan Walsh, File) (AP)
--

Last summer Democrats in the House of Representatives felt so excluded from the legislative process that they staged a Civil Rights-style sit-in on the chamber’s floor to protest Speaker Paul Ryan’s refusal to allow a vote on a gun-control bill. Ryan and his Republican majority heard their complaints and, in the spirit of magnanimity and bipartisan comity for which the GOP is so well-known, have now responded with a proposal that will punish any members of the chamber who ever go to such lengths to get their voices heard again.

As part of a House rules package members will vote to approve in early January, House GOP leaders want to empower the sergeant-at-arms to fine lawmakers up to $2,500 for shooting video or taking photos on the chamber floor.

The sit-in occurred last June, just before Congress recessed for the July 4 holiday. Democrats had been pushing for a vote on gun-control measures in the wake of the mass shooting at an Orlando nightclub that killed 49 people. The Republican majority would not even allow a bill with those measures to come to the floor, where it was likely to be voted down anyway. Democrats, having very little power to force any issues these days, and having very little to lose either, decided on some good old-fashioned protest action to seize the floor and not allow votes on any other bills.

The sit-in lasted for 25 hours. At one point the GOP tried to end it by shutting down the House chamber and turning off C-SPAN’s cameras, depriving the public of seeing just what it was that its elected representatives are doing. Democrats did an end-run around that move by using their cell phones to live-stream video and tweet out pictures from the House floor. Which garnered them a lot of publicity and embarrassed Ryan, who looked as if he had lost control of the chamber.

It didn’t help that the House already has a rule prohibiting cell phones on the floor, which the Democrats gleefully violated. Hence the GOP’s proposal to fine lawmakers who violate the ban during the next sit-in.

Republicans were incensed by the entire spectacle. For months GOP leaders met privately to craft a plan to either punish lawmakers who led the charge or write new rules to deter a similar future hijacking of legislative business. That led to Ryan’s current proposal.

Remarkable. Democrats were asking for a vote that they knew was likely to fail, but felt that gun control was an important enough issue to at least go on the record and make a statement. And the GOP, which has held more than 60 symbolic votes to repeal Obamacare, suddenly decided that doomed symbolic votes aren’t worth the time.

Had the GOP simply allowed the doomed vote to go forward, hardly anyone outside Congress would have even noticed. When it failed, as it was sure to do, Republican lawmakers could have said, “Sorry, Dems! We too would like to do something about the scourge of guns, but obviously the people do not want your solution. Try winning a majority next election.”

But why be gracious when you can be petty instead?

Luckily for any Democrats who may want to try this move again sometime in the future, it seems quite possible that Ryan’s proposal is unconstitutional:

[E]xperts say Ryan’s proposal may run afoul of Article 1 of the Constitution, which says “each House may … punish its Members for disorderly behavior.” For more than 200 years that has been interpreted to mean any contested sanctions against lawmakers must be approved by the full House with a floor vote, attorneys steeped in congressional legal matters say.

Imagine it: Democrats stage another sit-in. The House sergeant-at-arms tries to fine them each $2,500. They either gladly make a big show of paying it, or they sue the majority with the argument that their constitutional rights have been violated. Either way, it’s a headache for the GOP majority.

Contemplating Democratic responses makes you realize just how silly it is for Ryan and the Republicans to have pursued this measure in the first place. After all, the protest of last summer faded out right away. Democrats have not been able to leverage it into putting more gun control measures on the floor. They may have picked up a small handful of seats in November, but the protest didn’t translate into a Democratic majority in the House. It almost certainly was not responsible for the pickups the party did get.

Basically, the justifications for staging another sit-in on any issue, besides grandstanding, have faded out. Ryan and the GOP could have just let it go, secure in their power. With a Republican president in office, they could focus on their legislative agenda and dismiss Democratic protests as sour grapes.

Instead they have decided to toss another institutional norm, one that says only the full House can sanction members, right out the window. So not only will Democrats find it useful, publicity-wise, to stage more sit-ins, but the party will also feel empowered, should it ever again gain the majority, to punish Republicans in similar ways.

It is a silly and short-sighted move. In that, at least, it hews to Congressional tradition.