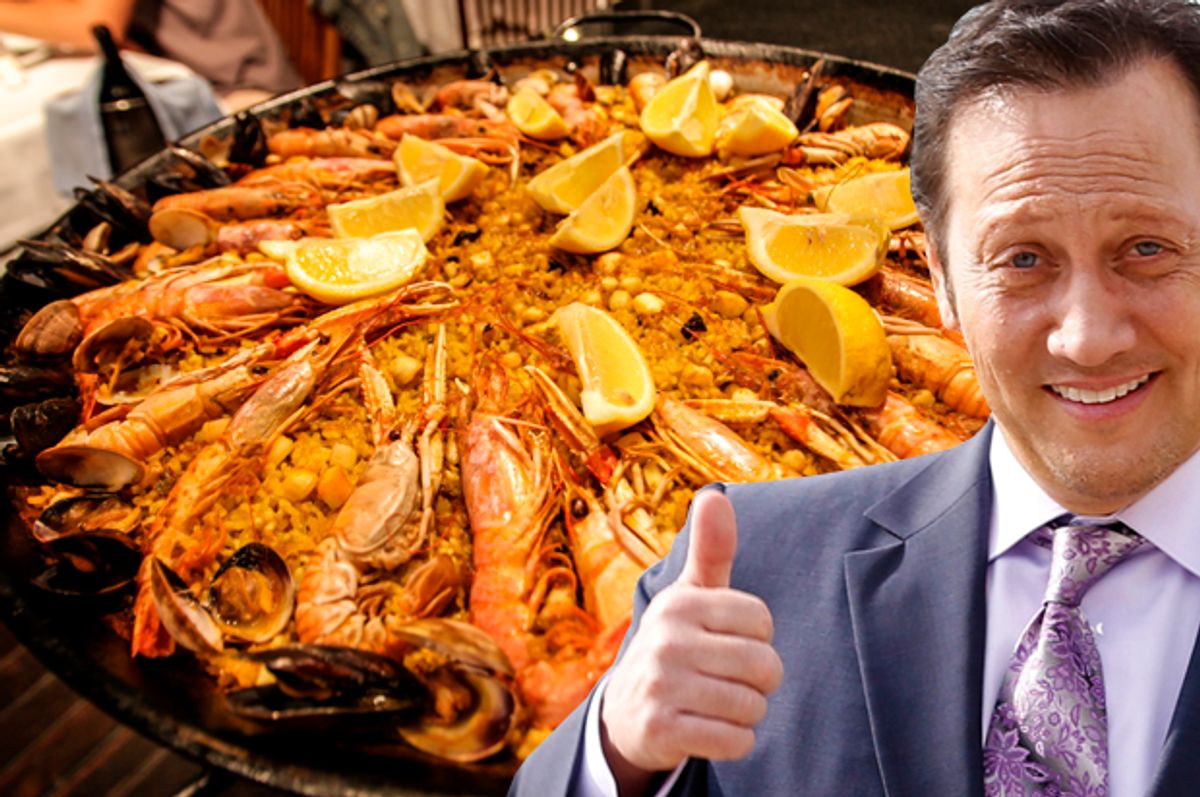 On Christmas Eve, while everyone was enjoying some unnecessarily gigantic meal, former “Saturday Night Live” star Rob Schneider attempted to make paella at home. And like many people in this Instagram-saturated world we live in, he thought his fans would appreciate a snap of his culinary adventures. Little did he know that his picture would break loose Twitter hell.

Spaniards were outraged. Some replied with angry, insulting tweets. Many sent pictures of their own paellas as inspiration. Others created fake, outrageous variations on the classic hot dog. A Spanish chef kindly took it upon himself to show the American actor what paella is and what it isn’t. For some hours, this became a trending topic in some regions in Spain. Schneider finally apologized and vowed to try to make it again, with all the new paella knowledge forced on to him through social media.

Massive raw lobster tails aside, Spaniards were reacting to what they felt was cultural appropriation of their cuisine.

Spaniards are certainly very proud of their cuisine, and we can be regionalists to a fault. No two towns can fully agree on what exactly you need to put in a paella. Some argue that onions give it the better flavor, but many will say that there is no place for them in the dish. Some take their issue with peas and fava beans, and others have unearthed family recipes going back to the 19th century to show that snails have a place on the rice. But small battles aside, there’s one thing everyone can agree on, and that is that one must cook paella in, well, a paella pan.

The shallow and wide pan, with two handles in opposite sides, gives the name to this rice dish. And to some extent any rice dish cooked on such pan could qualify to be a paella. So even if we take this very low bar for defining paella, Schneider’s dish failed the test. As a twitter user pointed out he just made “rice with things,” or perhaps more accurately, things with rice.

To Schneider’s credit, where could he have turned to for a paella recipe that wouldn’t have infuriated most Spaniards? Just a few months ago, the famous chef Jamie Oliver failed the paella test again when he proposed a recipe that not only was again not made in the proper pan, but it also added something no Spaniard has ever seen in paella: chorizo. Just like Schneider, Oliver received his fair share of criticism on social media, and even newspapers reported the story as some outrageous insult to Spanish culture.

But unlike Schneider, Oliver is a chef, and a widely recognized one. So people will turn to him for advice. What are a celebrity chef’s responsibilities when writing a recipe for a dish that hails from a different cultural tradition than their own? How much should they stay close to the original dish and how much room do they have to be as creative as they want to be?

It is hard to talk about cultural appropriation in food. For one, most cuisines have been developed as a result of the influences of many peoples, and hail from particular territories rather than countries. To call paella a staple of Spanish cuisine is probably misguided, since the dish is from the Mediterranean region of Valencia, and yet it has come to represent Spanish cuisine abroad. In America, centuries of immigrants from all around the globe have given us great creations, from classics like the cheeseburger and the burrito to more modern creations like the croughnut or the Korean taco.

A quick browse through the big food magazines in English reveals that virtually all have at least one paella recipe that includes chorizo—and most include other big no-nos among paella chefs. But most of them fail to mention that “chorizo” cannot be found in the dish in Spain. And in fact, most Spaniards felt even disgusted by the thought of it.

And yet if the nature of paella changes regionally inside Spain (even inside Valencia region), why should we allow those discrepancies only inside the borders of Spain? Shouldn't we embrace, as David Rosengarten suggested in a Saveur article, the “changing nature of the dish” and “focus on the singular pleasure of eating it” instead? One could argue it should be a source of pride to see your cuisine become a source of inspiration for many around the world.

But at the heart of Spaniards’ battle to keep chorizo out of paellas around the world is the sense of protecting a sacred identity. Earlier this year at Oberlin College, some students protested against a coleslaw and pulled-pork sandwich that was being sold under the name “banh mi,” which is a Vietnamese sandwich consisting of none of those ingredients.

Take, however, two of the big immigrant cuisines in the U.S.: Mexican and Italian. Arguably, tacos ordered in Texas are quite different from a carnitas taco found in Jalisco. And “marinara” sauce in the United States has come to mean a whole different world from the original Italian word. But unlike Mexican-American and Italian-American food in the U.S., which are the result of large populations of immigrants settling in the country and bringing with them their food and recipes and adapting both to the ingredients and the palates of the land, the chorizo-paella (or the Oberlin “banh mi”) seems rather the result of non-Spanish chefs in a test kitchen deciding what belongs in a dish with what seems like little research or respect to the country of origin. And unlike most creations that are a result of culinary cross-pollination (think: the ramen burger), no one is changing the name to suggest this is a new creation. (I suggest we call this “choriella” from “chorizo” and “paella”).

Krishnendu Ray, a New York University professor of food studies, argues in “The Ethnic Restaurateur” that white chefs have more freedom to play with other people’s food than chefs of color do, which creates an inherent inequality in the field. To that, I would add that in a world where most people turn to the Internet to find recipes — and English is the de facto lingua franca of the online world — English-speaking chefs not only have more freedom to play around, but they also have the power to ultimately transform traditional dishes from other countries, without so much as an acknowledgement.

So please, please, Mr. Schneider, at the very least — use a paella pan next time.