Best of 2016: 14 criminally underrated albums that came out this year

From Wye Oak to Garbage, here are 14 amazing albums that aren't dominating the other year-end lists 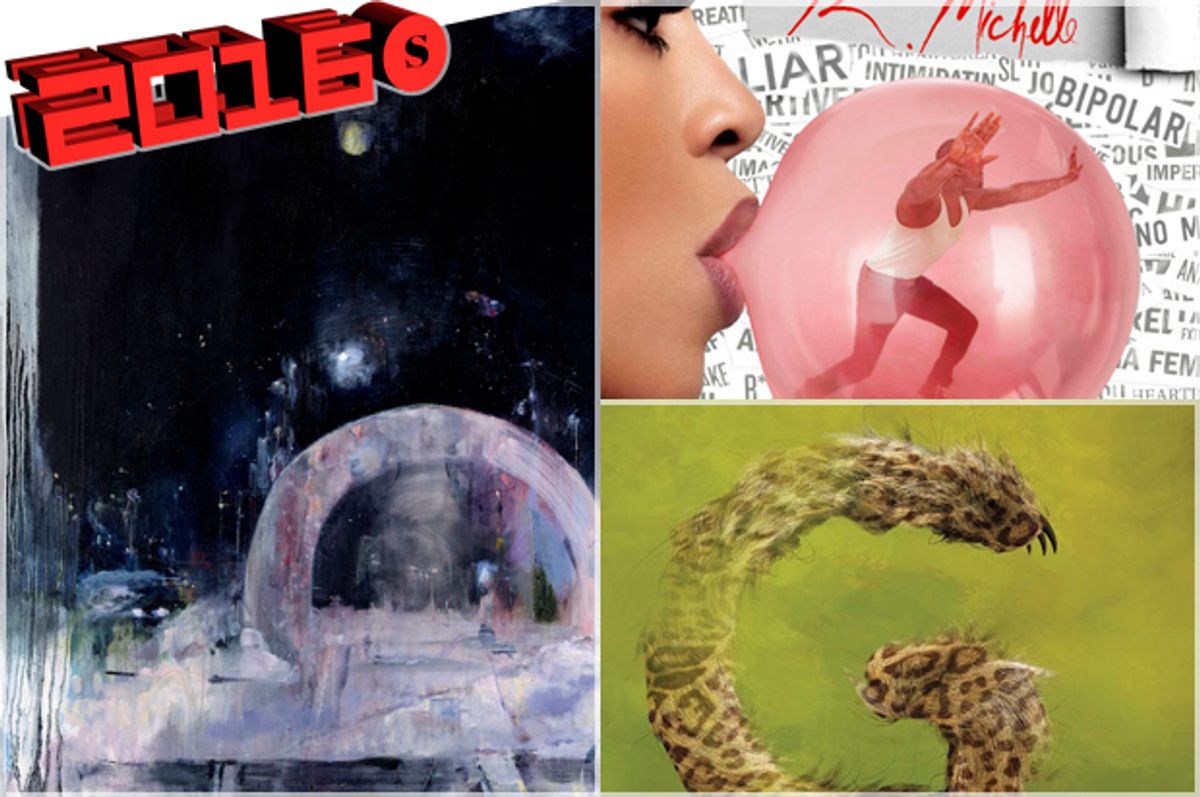 Year-end album lists have been rolling in since Thanksgiving. Unsurprisingly, Beyoncé's "Lemonade" has been racking up accolades, including the No. 1 spot on Rolling Stone's 50 Best Albums of 2016 list. Bey's sister, Solange Knowles, has also been receiving widespread acclaim for her record, "A Seat At The Table": NPR and Pitchfork both named it the best album of 2016. David Bowie and Leonard Cohen are receiving posthumous plaudits for "★" and "You Want It Darker," respectively. And Chance The Rapper's "Coloring Book," Bon Iver's "22, A Million" and Radiohead's "A Moon Shaped Pool" are also placing high in publication rankings.

As usual, however, plenty of worthy releases aren't acknowledged in these wrap-ups. That's partly due to critical consensus, which always tends to coalesce around a similar group of records. The staggering volume of albums released in a given year is also an issue: Dozens (if not hundreds) of records always get lost in the shuffle, overshadowed due to stacked release schedules or lack of hours in the day to cover everything.

And so in alphabetical order, here are 14 of the most underrated albums released in 2016 — records that were unfairly overlooked because of factors such as timing, distribution or widespread promotion.

1. Adia Victoria, "Beyond The Bloodhounds"

Nashville-based Adia Victoria possesses a raspy, malleable voice that effortlessly conforms to the blues-, rock- and folk-inspired songs on her second full-length, "Beyond The Bloodhounds." On the fiery "Dead Eyes," her voice glints in tandem with stormy, twanging guitars; on the jazzy "Out of Love," she sticks to a lilting, light tone. Perhaps more important, "Beyond The Bloodhounds" finds Victoria speaking her truth about topics such as bullying, personal insecurity and racial identity. "I don't know nothin' 'bout Southern belles," she sings on the slow-burning "Stuck in the South." "But I can tell you something 'bout Southern hell/When your skin give 'em cause/To take and take."

Paul Cauthen—who shares a record label with Jason Isbell, James McMurtry and Amanda Shires—is a throwback to the days when country and gospel music were inextricably intertwined. On songs such as "Grand Central" and "Saddle," the baritone singer warbles like a church soloist, while the smoldering "Be There Soon" boasts a holy-sounding choir and spare organ. Secular fans need not feel left out, however: Road-weary piano and pedal steel battle for attention on "Marfa Lights," a Springsteen-reminiscent standout.

The latest full-length from this hip-hop trio, whose members include "Hamilton" star Daveed Diggs, has appeared on a few scattered year-end lists. However, "Splendor & Misery" deserves widespread recognition for its jaw-dropping, space age production—dig the digital noise on "All Black," perforated laser blips on "Wake Up" and metallic rhythms of "True Believer"—and futuristic storyline. (As label Sub Pop puts it, the record is "an Afrofuturist, dystopian concept album that follows the sole survivor of a slave uprising on an interstellar cargo ship, and the onboard computer that falls in love with him.") Occasional gospel music interludes, courtesy of legends Take 6, add grounding, somber gravitas.

4. Daughter, "Not To Disappear"

Albums released in January tend to be forgotten by the end of 2016. That's the unfortunate fate suffered by Daughter's sophomore effort, "Not To Disappear," whose chilly songs sound as desolate as a frozen tundra. Sparse percussion, electro flourishes and glacial guitars dominate, although occasional moments of distress—unexpected bursts of noise, devastatingly sad melodies and startling lyrics ("I hate sleeping alone/Terrified with the lights out")—shatter the illusion of tranquility.

Heron Oblivion is a supergroup of sorts featuring a psych-folk vet (Espers' Meg Baird) and two members of throttling noiseniks Comets On Fire. Unsurprisingly, the group's self-titled debut is a study in contrasts. Baird's wary but welcoming voice is a cautionary presence, while the group's roaring guitars (which resemble Neil Young & Crazy Horse riffs being dragged by a moving car) bring fire and brimstone.

Michelle's third album reached No. 2 on the Billboard album charts. The commercial recognition was well deserved: "More Issues Than Vogue" is a collection of super-sleek, diverse R&B that hews toward pop (the Jason Derulo-featuring "Make The Band"), torchy soul (the delicate "If It Ain't Love," lounge barn-burner "These Men") and hip-hop (the '90s throwback "Mindful"). K. Michelle's brutal lyrical honesty is even more impressive. For example, "Nightstand" sums up her exasperation with unworthy men with silver-tongued disses such as "I like Drake better than you."

The Indiana-based sister duo Lily & Madeleine takes a giant leap forward on its thoughtful, fanciful latest album, "Keep It Together." Laissez faire hip-hop beats, '70s folk flourishes and ethereal piano combine to create lush, sophisticated indie-pop. Plus, as first track "Not Gonna" and the glimmering "Hourglass" illustrate, the pair's harmonies are somehow even more bewitching and piercing than they were on previous records.

The London Suede hasn't had any real live presence in the U.S. since the late '90s. (A 2011 Coachella appearance barely counts.) Still, the glammy Britpop band has been on a studio hot streak since reuniting several years ago. This year's "Night Thoughts" doesn't have the compact pop hooks of its last record, 2013's "Bloodsports," but does boast rich orchestral flourishes, dramatic guitar arpeggios and vocalist Brett Anderson's still-pristine, theatrical croon.

This wise-beyond-its-years New Jersey quintet specializes in orchestral indie-pop with delicate vocals and a penchant for dramatic, soaring guitars. "Dear Me" is difficult to pigeonhole, however. "Too Young To Fall In Love" boasts New Order-reminiscent keyboard work; "Not Today" has sleek, modern electronic production; and the mincing, strings-heavy "Places" takes inspiration from Sigur Rós.

St. Lenox vocalist Andrew Choi—a Julliard-trained violinist who has a Ph.D in philosophy—wrote his new album as a 70th birthday gift to his dad, who emigrated from South Korea. The resulting record is an unsparing look at Choi's experience as a second-generation Korean-American, with lyrics comparable to John Darnielle's incisive work with the Mountain Goats. (Among notable lines: "You're not better than me, rich kid," Choi intones on the acoustic-based "The Public School System.") In a nod to Choi's musical upbringing, the record's arrangements are detailed, and feature keyboard flourishes and ornate melodies.

With "Wild Pendulum," Scottish pop stalwarts Trashcan Sinatras have cranked out another lovely, understated collection of '60s-pop-inspired tunes. Sparkling guitars and lacey melodies drive "Let Me Inside (Or Let Me Out)"; music box-caliber percussion and mariachi horns permeate the quirky "All Night"; and falsetto accents add urgency to the surging standout "Ain't That Something."

"Tween" is a collection of unreleased outtakes dating from the time period between two Wye Oak albums: 2011's "Civilian" and 2014's "Shriek." This collection of never-weres and shouda-beens runs circles around many planned releases, however. The Baltimore-based duo explores Cocteau Twins-esque shoegaze, watery post-punk and through-the-looking-glass indie-pop with far more vision and clarity than many bands do on proper albums.