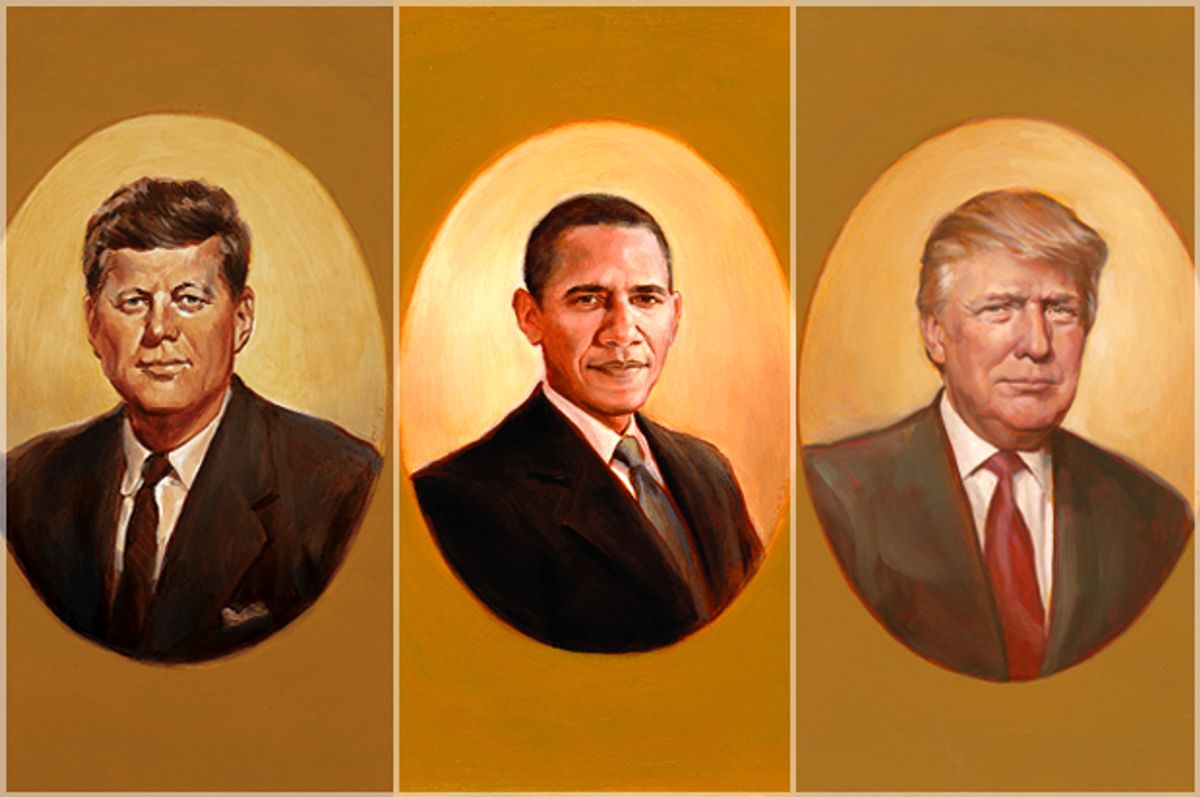 C-SPAN has released its portrait of Donald Trump and the future president looks a lot like Pepe the President. He's given more crow's feet than he should have, but also looks a lot skinnier than he is. But where does Trump's portraits rank among the pantheon of 20th and 21st century American presidents? Thanks to CSPAN, which let us publish their portraits for our own amusement, here's a non-official power ranking, from worst to best: No, this one doesn't work. Not at all. President Obama is a skinny dude — a lot skinnier than the barrel chest that the painter has given him here would indicate. His head is not this round. I have to give the painter some credit, though — he nailed the mouth. Did Bush paint this one himself?

"It could be worse" is a phrase that I'm sure we'll get used to hearing over the next four years. Why does it look like Gerald Ford had just fallen off a ladder and was trying to straighten his tie as this was being painted? Peace in the Middle East would be more attainable than getting that nose right. The ultimate story about "silent Cal" is that he was at a party when a woman came up to him and told him she had a bet with a friend that she could get him to say more than three words to him. His response? "You lose." That's a badass story. Still, that's a very large forehead he has going on in this portrait. And his neck looks a bit small when you look closely. "Hey, Jim, remember that time Bill Clinton had to admit he had an affair with an intern?"
"Yeah, Bob?"
"Remember how embarrassing it was for him? And how much shame he had for himself, his family and his nation?"
"Of course!"
"Can we use that as inspiration, please?" Sad! Look at that! Where's the chiseled jaw? The charismatic good looks? The hair is less "parted to the side" and more "Alfred E. Neuman." Looks as if I'm looking at the 35th president while wearing beer goggles. That's not George Bush's smile. Bush's natural smile is incredibly forced-looking, even if it never was. It's done like he knows that his mouth has to be open a certain amount with his dimples working only so hard. This looks more like Brian Williams than George Bush. Sometimes, when looking at a painting, I can confuse it with the cartoon caricature of our presidents. And it would be unfair to give Nixon the overstated cheeks and jowls that cartoonists have tended to give him. But on the other hand, he was a pretty jowl-y dude. And we can't let history wash that away. I'm left with a sad sense of what could have been. We get a hint of the man who led the Rough Riders, but it's only coming through slightly. It's like seeing Harrison Ford in a suit and tie in "Indiana Jones and the Kingdom of the Crystal Skull." I get it, he's the man, but still. Give me something, even just a top hat or a dead animal behind him. Woodrow Wilson may rank in the top 10 of presidents, but I was never much of a fan. My enthusiasm for him faded when I learned he was a big fan of the Ku Klux Klan propaganda film "Birth of a Nation." He also re-segregated parts of the federal government. So it's fitting that the portrait seems to suggest something sinister behind his buttoned-up, Princeton-presidenting eyes. Roosevelt, the man I always associate with his top hat and cigarette holder, doesn't come through in the same light as photos of him do. The portrait makes him look normal. Maybe a bit worn down. You have to wonder when it was based on — was it toward the end of his life, or when he was coming off his third presidential election? There's not enough of the man from Independence, Missouri, here. Truman was the last president of the first half of the 20th century. But this photo doesn't do the man enough justice for some reason. Sometimes that frailty comes through and it comes through well. There's pride and fear in this painting. The stiff upper lip, and tightly closed mouth. It's rather striking. I'll give it a thumbs up. The steel-jawed 29th president, who died in office after a bout of poor health, won't be anywhere except the bottom of most lists. Still, if you want a president that looks like the buttoned-up villain of a superhero movie, you could do worse. I keep forgetting that the man who warned us about the military industrial complex was very bald. He also managed to balance the strength of an esteemed military leader with the domestic policy chops that literally shaped the modern American economy. Still, as pictures show, he had a bit of a funny-shaped head, and I'm glad the portrait shows that, too. It's tempting to sometimes fit the portrait into what we think of the men that were painted. It would be easy to make the man who nicknamed his (ahem) vice-president "Jumbo" appear larger than life and having more (probably justified) swagger than he shows here. I dare say that LBJ actually looks a bit frail and human. And in this case, it works. Taft was was legendary. He's the only person in American history to be both chief justice of the Supreme Court and president of the United States. He followed in Teddy Roosevelt's mold when it came to trust-busting. He was so large his bathtub could fit four men. The painting captures it all: His mustache, his girth and his chins. Huzzah! This portrait is an amazing portrait. I personally love it. What better way to capture the spirit of the president whose lassiez-faire free market, anti-trade policies ushered us into the Great Depression then to make him look like the owner of a shitty used car dealership?