WATCH: 7 times in 2016 when James Corden made us feel better with "Carpool Karaoke"

Sing in the car with Adele? Don't mind if we do. Here's the very best of "Carpool Karaoke" in 2016 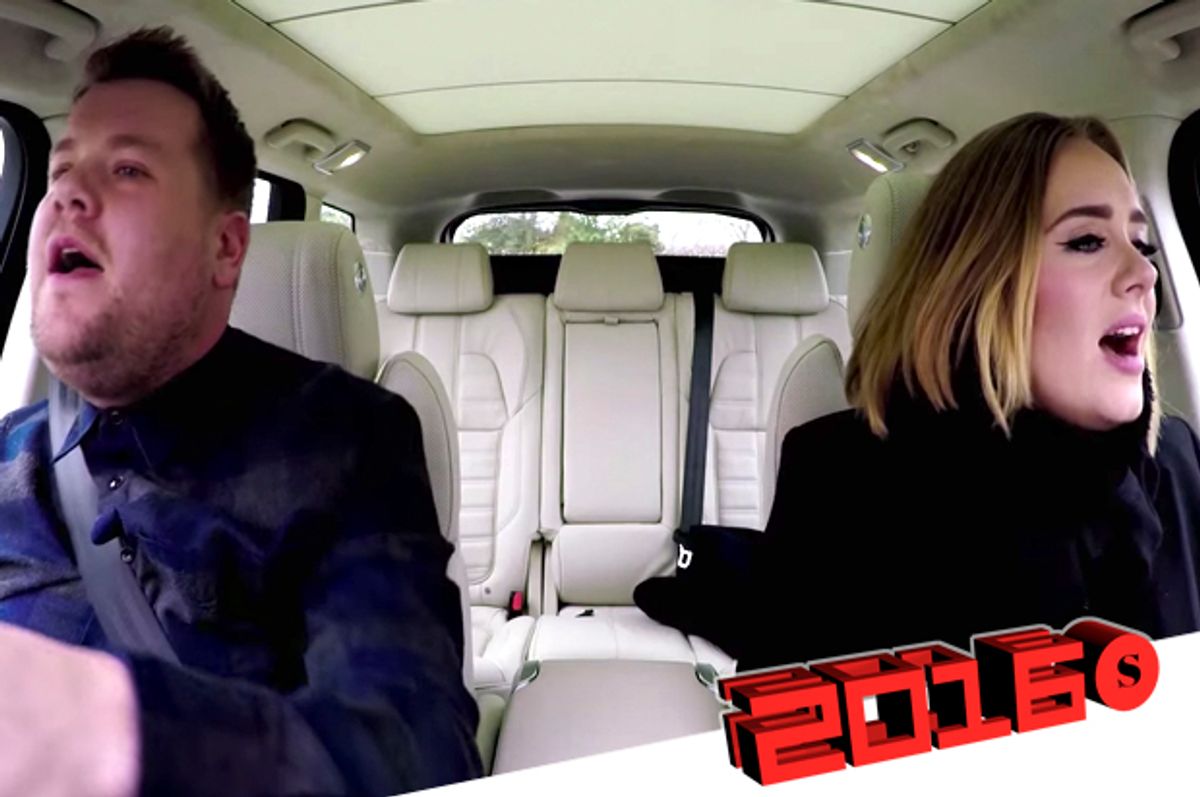 He greeted 2016 with "Hello," and ended with a Christmas classic.

1. Adele started the year off right

Corden harmonized with Adele when the two sang along to her song "Hello" in January.

"That was amazing," the artist exclaimed when Corden sang falsetto.

The "Cheap Thrills" singer still didn't show her face, but showed off her voice in singing her hit "Chandelier" for the "Late Late Show" segment in February.

"I don't wear this thing unless there's cameras around," Sia said about her headwear, "I only wear this to maintain a modicum of privacy."

In May, between making jokes at the expense of singer Nick Jonas's love life and Corden discovering that DNCE's "Cake by the Ocean" was just a mistaken understanding of "sex on the beach," Lovato, Jonas and the "Late Late Show" host managed to sing a number of both stars' hits.

"Carpool Karaoke" hit a landmark moment when it featured the first lady who "goes high" when everyone else goes low. Corden and Michelle Obama belted out Stevie Wonder's "Signed, Sealed, Delivered" and Beyoncé's "Single Ladies," before being joined by artist Missy Elliot, while driving around D.C.

Obama said that she would miss the White House staff after their eight years together, but Corden asked the real question: "Are you not going to miss like 24-hour room service?"

Nostalgia for the '90s and early 2000s seemed to hit an all-time high in 2016, and Corden brought his viewers back when he sang "Oops, I Did It Again!" with guest Britney Spears in addition to "Toxic," "Womanizer" and other Britney pop hits.

7. All we wanted for Christmas was this

With Christmas fast approaching — not fast enough after all we've been through in 2016 — James Corden played Santa Claus. His "Carpool Karaoke" version of the Mariah Carey Christmas classic featured not only the singer herself, but Adele, Demi Lovato, Nick Jonas, Elton John, The Red Hot Chili Peppers, Selena Gomez and Lady Gaga.