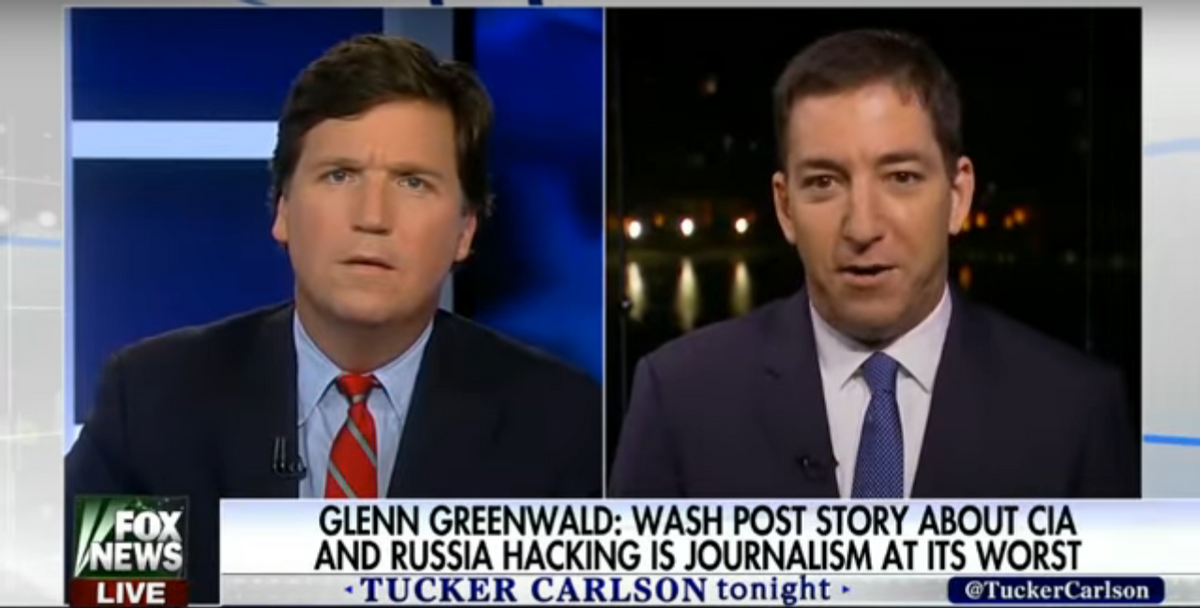 Fox News anchor Tucker Carlson insisted last week he is open-minded and "willing to believe in anything, basically" when it came to the cyberattacks directed at Democratic officials during the 2016 campaign. But Carlson wondered aloud during a conversation with Intercept founder and Pulitzer winner Glenn Greenwald why Russia "all of a sudden" became "villain No. 1." New York magazine's Jonathan Chait, perhaps sarcastically, described the interview as "one of the great meetings of journalistic minds."

Greenwald and Carlson may have little in common ideologically, but they share a deep skepticism about the news surrounding Russia's involvement in the election. Both believe the reports of Russian hacking are politically motivated and potentially dangerous to international relations. Carlson blamed a Washington Post story published Dec. 9 for stoking distrust in Russia. The story reported a "secret CIA assessment" that revealed Russia was trying to help President-elect Donald Trump win the White House. Carlson asked Greenwald if the American people should believe the report. Greenwald, a vocal cynic of the CIA and the media establishment (as well as a former columnist for Salon), said, "We should be extremely skeptical of it."

Before Donald Trump emerged as a viable candidate for the GOP presidential nomination, the prospect of Greenwald as a popular Fox News guest would have seemed highly improbable. Last week's interview with Carlson represented a marriage of sorts between Trump apologists and leftists critical of the mainstream press. Greenwald did concede that Russia may have hacked the Democratic National Committee, and objected to any accusations of being disloyal or a "tool of the Kremlin" merely because he's asking for evidence.

Experts from 19 intelligence agencies have signed a letter indicating that the United States intelligence community is in agreement that Russia conducted the email hacks. But for Greenwald and Carlson, the hysterics about Russia from the media and Democrats is overblown. Greenwald said: "Americans do not wake up and worry about Vladimir Putin."

Carlson, for his part, was bewildered that U.S. media was reacting so strongly to the apparent intervention of a foreign power, a reaction shared by journalists on both the left and right who welcomed the DNC leaks.

Watch the video of the interview here, courtesy of Fox News: