The usual party tunes don't seem right for tonight's showdown with the clock and calendar. Listen to these instead 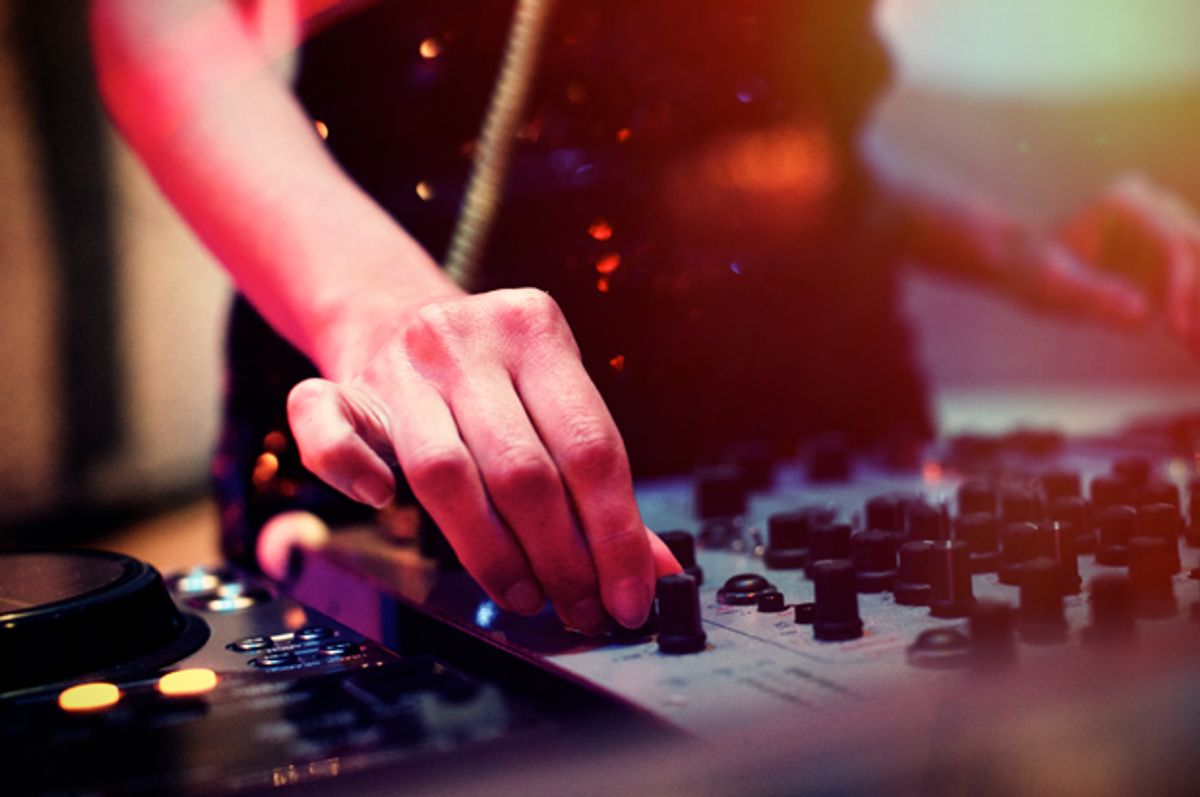 You're throwing a New Year's Eve party, or you're at home getting ready to go out. After such a year as 2016, do your old standby party mixes really work? What this New Year's Eve needs isn't feckless celebration — it's catharsis. Salon staff and contributors picked their favorite songs to soundtrack the purging of bad energy and clarification of purpose that a truly cleansing New Year's Eve 2016 demands.

Weep with sorrow, and then dance it away

“Farewell, Farewell,” Fairport Convention. Between Sandy Denny (who wrote the immortal “Who Knows Where the Time Goes”) and Richard Thompson (author of the afterlife lament “Meet on the Ledge,” the anti-war dirge “Sloth,” and many others), the bar for songs about death was set pretty high for this group of North London folkies. But this number, adapted by Thompson from an 18th-century Scottish ballad, may be the best of them all. With Denny’s ethereal vocals and Thompson’s chiming guitar, the song builds — in its understated way — into an instance of pure catharsis that would make even the ancient Greeks weep with sorrow.

“The Blues Are Still Blue,” Belle & Sebastian. Half of the Glasgow group’s work is about living with a mild and autumnal kind of melancholy; the other half is about dancing away the depression. (The balance changes from album to album but that tension never departs.) Here’s one of the best examples of the second half. There are many others.

“Sometimes It Snows in April,” Prince. The sudden and cruel loss of one of the key artists of the last 50 years has caused many to look back at his work and rave about its sophisticated gender-bending, its complex blending of soul and rock traditions, and the utterly amazing guitar playing, which could approach Hendrix-like heights. Less noted is how sensitive and craftsmanlike and verbally ingenious Prince Rogers Nelson could be. This is about life and death and winter and spring and everything in between. RIP The Artist Formerly Known as the Artist Formerly Known as Prince. — Scott Timberg, culture writer

“A Long December,” Counting Crows. I'll grant you that I'll never pass up a chance to recommend a Counting Crows song, but aside from the obvious in the title and first line — "A long December and there's reason to believe/ maybe this year will be better than the last" — it's a very good song. Aside from the lyrics, I've always been a fan of the stop-and-start of the main guitar, which gives the verses an impression of a rather depressing high school dance. The song builds to a crescendo, and ends in a whimper. Yeah. — Jeremy Binckes, cover editor

"We Didn't Start The Fire," Billy Joel. A tad cliché, perhaps, but the historian in me loves listening to this one on New Year's Eve. Its frantic reiteration of the political, cultural and social history from 1949 to 1989 offers a great reminder of just how chaotic the events around us can seem while they're happening. It's oddly humbling, particularly as we try to make sense of the dumpster fire that was 2016. — Matthew Rozsa, breaking news writer

Pray for a revolution

Truth be told, I listen to 4 Non Blondes' "What's Up" every week, but I play it nonstop on New Year's Eve. Even without listening to the lyrics, the sound itself is cathartic and calming. But the lyrics couldn't be more appropriate for a new year (especially when that new year follows one of absolute horror). "I pray every single day / For a revolution." We're all praying. — Tatiana Baez, social media coordinator

Have heart, have hope

When faced with adversity and disappointment, it is often comforting to look inward to the essence of being. While subdued and melancholic, there is a deeper optimism at the core of Beck's "Heart Is a Drum." As long as we feel the heartbeat in our chest, there is hope. — Michael Hardy, director of optimization

"Constructive Summer" and "Stay Positive," The Hold Steady. Don't get pedantic about the unseasonal title, "Constructive Summer" is an anthem for new beginnings, for big hopes and dreams, and the exorcising of communal angst. "Me and my friends are like / the drums on 'Lust for Life'" is a killer line, and even though things don't go so swell for the kids in the song, the ending offers a sobering mantra for anyone wanting to face 2017 with dignity and power: "Getting older makes it harder to remember / We are our only saviors."

Raise your double whiskey-coke (no ice) to St. Joe Strummer this New Year's Eve, and to those we lost in 2016: "My friends that aren't dying / are already dead."

Then segue right into the title track off that album, because it helps to tap back into your all-ages hardcore matinee show youth when you're trying to stay positive. You won't have a voice on New Year's Day after singing along, but you won't care. — Erin Keane, managing editor

It will dissolve your New Year's Eve party into a weeping mess, but if you want catharsis, you're not going to do any better this year than David Bowie's "Life on Mars." Put it on, orchestrate a big group hug, bawl together, and then put on some Prince and honor his memory with a dance party. — Benjamin Wheelock, senior art director

“Alive,” by Sia. Preferably screamed along to. Every one of us who somehow did not die -- WELL DONE. — Mary Elizabeth Williams, culture writer

"Good Vibrations," The Beach Boys. I'm no doctor, but here's what I know about healing: There's one surefire way to recover from any injury, depravity, life-threatening disease, existential fear, you name it, and that way is really great drugs. Kidding! I'm talking about The Beach Boys. Brian Wilson performing "Pet Sounds" in Prospect Park this past summer was a rare moment of unadulterated joy I felt this year. Spread the good vibrations! — Max Cea, contributor

For making good choices next year

I've been listening to "Polyester Bride" by Liz Phair (from "Whitechocolatespaceegg") a lot. It's a really catchy song about pulling yourself out of misery and getting over your own shit. Like many of her songs (especially on "Exile in Guyville"), it's fairly narrative driven. The gist is that the protagonist of the song goes to a bar, complains about men to the bartender, and he tells her that she has the wrong perspective. "You're lucky to even be here," the man remarks. "You're lucky to be alive."

I love the polyester wedding dress as a metaphor. The image is meant to denote someone who marries frequently, and thus, would want to reuse her old gown. The song asks: Do you want to constantly be making the old same mistakes? Instead why don't you try making new ones? I think that's a pretty good resolution for any year. — Nico Lang, contributor

We’ll all muddle through together

The day I was diagnosed the first time, I played Modest Mouse's "Float On," no lie, about a hundred times, and I do find it very motivating when things are looking extremely bleak. It's about muddling through, together. — MEW

If it’s going to be that kind of party …

“The Power and the Glory,” Warren Haynes. This soulful scorcher from Haynes' first solo record actually takes place at a party, but in the hands of Haynes, the party becomes a microcosm of destructive inequality and corporate cruelty in America, with the obscenely rich host bragging about the senators and the governors in his pocket, and then committing some unnamed act of assault against a poor worker. The massive, blues inflected, gospel groove of Haynes and his band makes the song feel good, but the story documenting dishonesty and exploitation on an enormous scale leaves little room for celebration. — David Masciotra, contributor

Get high and listen to “Gemini” by Alabama Shakes off their amazing album "Sound and Color." Not only will the euphoric guitar solo help you get through the night, it might make you forget about how awful this year may have been. — Matthew Smith, associate video editor

Part of what will keep us sane in the coming...dear God...four years is to stay motivated and stay optimistic.

For the first, blast Public Enemy's "Fight the Power" around midnight. If you listen to the lyrics, I don't have to explain why...

"Blankest Year," Nada Surf. When I saw Nada Surf in September, the set's most cathartic moment came when the band launched into the snarling fuzzbomb "Blankest Year," which celebrates a terrible year coming to an end. In unison, the entire crowd hollered the song's recurring rallying cry ("Oh, fuck it/I'm going to have a party") over and over again, with more gusto each time. Quite honestly, I can't think of a better sentiment to sum up New Year's Eve in 2016. — Annie Zaleski, music writer

Prove that dreams can be a good thing

It's difficult for me to choose one specific song because each is cathartic to a degree. And I typically play the role of DJ on Spotify, meandering through music from across the spectrum. But this New Year's Eve I may very well play Pearl Jam's "Wishlist" [Live] because it's "...proof dreams can be a good thing." Sometimes all we need is a little EdVed wisdom to remember what life is about. — Chris Murphey, director of video

"I wish I was a sentimental ornament you hung on
The Christmas tree, I wish I was the star that went on top..."

Kick the party up a notch

"Fifteen Feet of Pure White Snow," Nick Cave and the Bad Seeds. "I waved to my neighbor/ My neighbor waved at me/ But my neighbor is/ My enemy." As usual, you'll get lost in the weeds if you try to figure out what any song by Australia's post-punk Americana-steeped poet is about. This particular insidious, catchy and profoundly unsettling tune from 2001 may be about religion, or death, or the darkness of the human spirit. There is probably a reason why the men's names used in the second stanza are Matthew, Mark, Michael and John -- and the reason might just be that Cave thought they sounded good, and had a certain resonance. The song is probably not about an especially deep snowfall, or girls who leave the house with no mittens on. It might be one of the most therapeutic rock songs ever written about profound depression, and I have never known it not to kick the party up another notch. — Andrew O’Hehir, executive editor

Drain the swamp of despair

I've had George Harrison's "Beware of Darkness" on heavy rotation lately. It's a heartfelt reminder to drain the swamp of despair and move toward the light. "Watch out now, take care, beware of greedy leaders...."

In a similar introspective vein (I'll be the one sitting quietly in the corner at my New Year's Eve party, weeping softly into my eggnog and playing oldies), I've discovered Jethro Tull's "Inside," which is a celebration of friends and love and a good cup of coffee and all the things that matter. It's a happy song that, at least for a moment, makes even a weary old cynic like me into a prattling poobah of positivity. — Erfert Fenton, copy editor