Why celebrate the New Year? Under President Trump, 2017 could be even worse

Signs of hope may be visible in the distance, but odds are the New Year will be even more harrowing 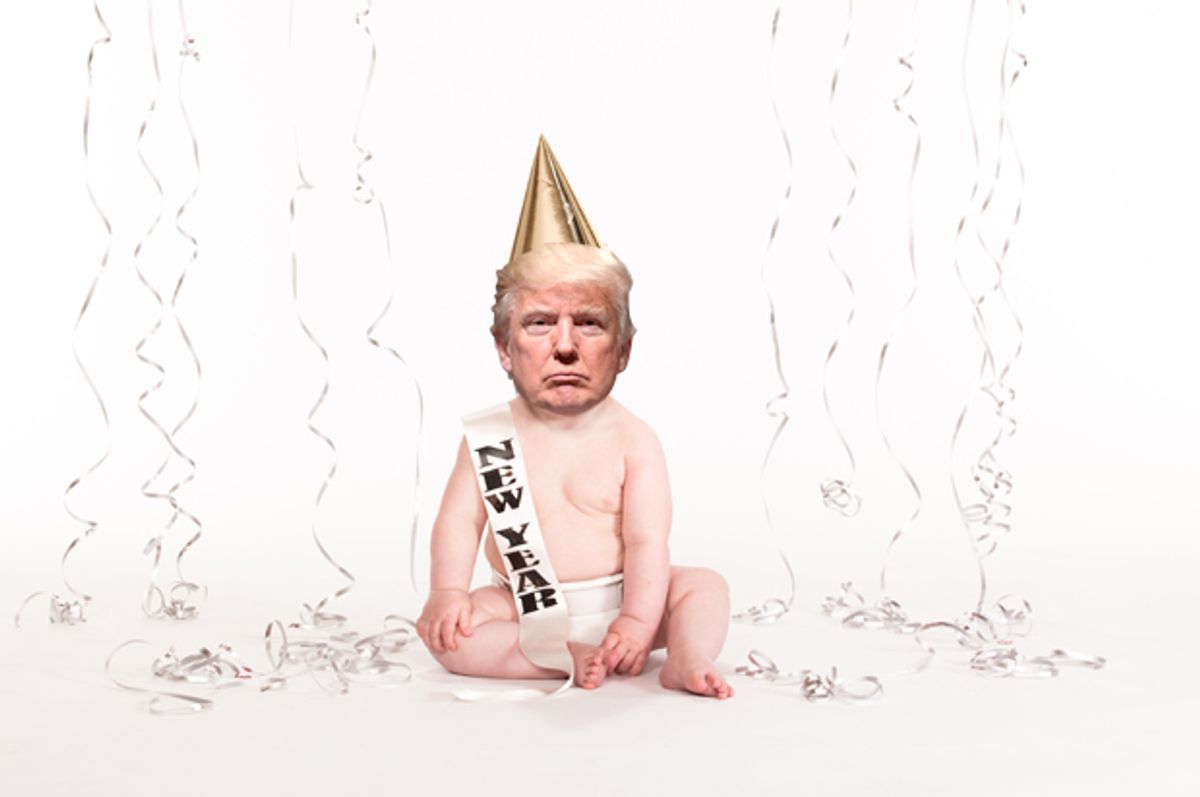 Though 2016 has been, for many, one of the most harrowing and depressing years in recent memory — with the deaths of many beloved entertainers and artists, the rise of far-right populism throughout the Western world, and the ongoing geopolitical crises in the Middle East, to name just a few reasons — there is little reason to celebrate the year's end this weekend, or to be hopeful for 2017.

In just a few weeks, a man as shameless and opportunistic as the race-baiting demagogue George Wallace; as vindictive and thin-skinned as the 37th president, Richard “Enemies List” Nixon; as phony as the original American charlatan, P.T. Barnum; as unhinged as Stanley Kubrick’s mad general Jack D. Ripper; and as sleazy and authoritarian as Joseph McCarthy will be sworn in as the 45th president of the United States. And when "deplorable Don" arrives in Washington, he will have a Republican-controlled Congress full of partisan lackeys, unscrupulous sycophants and empty-suit pontificators to lick his boots and kiss his ring — as long as they can slash taxes for their wealthy donors, privatize Social Security and Medicare and, of course, repeal the Affordable Care Act.

In no time at all people will be feeling nostalgic for 2016 -- longing for the days when Donald J. Trump was just a billionaire demagogue running for president, without any real power. Before he became the most powerful toddler in the world.

Of course, candidate Trump was a very dangerous man, and did more than any other individual in recent American history to normalize public racism, sexism and xenophobia, as well as political violence. His provocative campaign emboldened bigots and misogynists and rejuvenated white-supremacist and neo-Nazi hate groups, while poisoning political discourse and accelerating the country’s descent into a post-truth reality. If Trump had lost the election to Hillary Clinton, he would still have left the country hopelessly divided and more vulnerable than ever before to the forces of extremism and bigotry. But at least he would have left the country breathing.

Instead, this lunatic will have real and terrifying powers — including the power to unilaterally wage war around the globe and indefinitely detain American citizens, to order drone assassinations and, of course, to drop nuclear bombs (Trump can thank his predecessors — Democrat and Republican — for many of these powers). President Trump will oversee the Justice Department, the IRS, the NSA, Homeland Security and countless other federal agencies that can potentially be used to go after both political and personal enemies. Of which Trump has many — including journalists and popular critics, some of whom may choose to self-censor rather than risk retaliation from the vindictive and infantile president. The demagogue-in-chief will have the power to renegotiate or withdraw from trade agreements, start trade wars (and real wars) with countries like China and Mexico, and sabotage the Iran nuclear deal.

On and on it goes.

The power of the presidency is tremendous — especially when it comes to doing harm — and it is only slightly hyperbolic to say that a man as unprincipled and unhinged as Donald Trump in the White House, coupled with a Congress full of yes-men and fanatics, could singlehandedly destroy the United States (and the world along with it). It is, as the saying goes, much easier to destroy than to create, and the future of humanity will soon be in the hands of a petty, narcissistic reality-TV star who goes on impulsive Twitter rants at 3 o’clock in the morning and denies objective reality whenever it conflicts with his incoherent worldview.

There is no telling what Trump will do once he is in the Oval Office, or how much of his campaign rhetoric was empty talk. But his erratic behavior since the election and the far-right cabinet he has assembled over the past month indicates that he will be every bit as reactionary, demagogic and impulsive as he was on the campaign trail.

Thus, the New Year will bring great uncertainty — and great potential for catastrophe. As political satirist Bill Maher recently quipped, Trump is like “a toddler playing with a gun.” And in less than a month the gun will be fully loaded with the safety switched off. Whether the election of Trump will be “a death knell for the human species,” as Noam Chomsky put it earlier this year, remains to be seen. But it is all but certain that 2017 will make 2016 look like the good old days, regardless of which beloved celebrities drop dead.