A modest proposal: Let's not watch Arnold Schwarzenegger on "The New Celebrity Apprentice"

Allowing the franchise — even with Ahnold — to wither into Chapter 11 isn't just good for TV; it's good for America 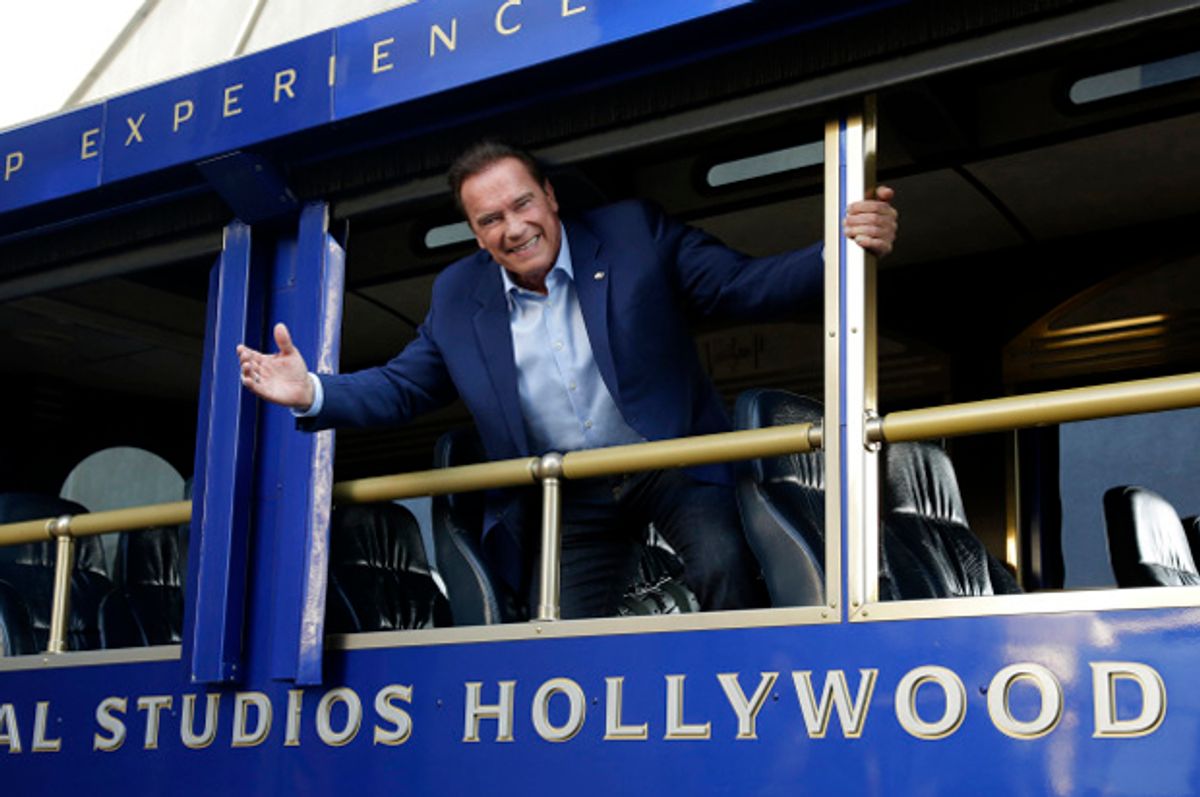 The television schedule is a wasteland during the first few days of the new year, even in the best of times. Everyone is either still off work, or feeling a little off in general, our holiday ecstasy tumbling into a communal blue Monday that makes our softened brains especially susceptible to nonsense.

This post-New Year’s Monday presents a particularly insidious danger, in the form of "The Celebrity Apprentice," seeking to lure us in by rebooting with Arnold Schwarzenegger taking over as host. NBC has been dangling the action star in front of us in various feature stories and ads, as if the American audience were a mischief of nog-drunk rats mindlessly scrambling toward a big cheese. But we are better than that.

So, let’s not fall for NBC’s shenanigans. Let’s reject the return of this franchise, full stop.

Easy enough, right? Perhaps you read that and nodded, “Done! Next!” solely based on a general disdain for reality television. Not so fast.

It’s not enough for people who wouldn’t have watched "The Celebrity Apprentice" to turn away from its resurrection. We have to do what we can to persuade our friends not to watch it either. “The Celebrity Apprentice” isn’t like, say, poverty or racism. If enough of us ignore it — and that will take some outreach on your part, friend — it will go away.

Believe me, someone you know or care about is curious to see what this business looks like now that it appears to be under new management. It’s not, of course. Schwarzenegger may have gotten his legislative ya-yas out of his system by serving as California's governor, but this hosting gig is still very much a political move on NBC’s part and by Mark Burnett, the show's creator and main executive producer.

Another executive producer, the one most pertinent to this story, is Donald Trump. According to Variety, the former host is maintaining his producer credit, which will net him at least five figures per installment. NBC has cleared this cycle of "The Celebrity Apprentice" to run for eight episodes, which translates to mere pocket change for old Littlefingers (sad!). Even so, that is still change funneling into the pocket of a nuke-happy narcissist about to take root in the Oval Office.

One would think that NBC would have let this franchise go after being pilloried for its role in laying the groundwork for Trump’s political career and giving him billions of dollars worth of free promotion. The Peacock already won TV’s unscripted Cold War on another front, developing "The Voice" into a potent force as Fox’s "American Idol" faded, finally blinking out earlier in 2016. (See? 2016 wasn’t a complete dumpster fire after all.) NBC has been finding success with newer shows, too. Even if certain partnerships and classic formats remain potent, such as the network's reliance on Dick Wolf's "Chicago" procedural franchises, they at least have a fresher spin on them.

The "Apprentice" franchise, however,  is only two years younger than “Idol.” It earned respectable ratings by NBC’s standards during its run, though at the start of its last season in 2015, Trump erroneously declared that it was the number 1 show on television, when a simple Google search would tell any literate person that it wasn't. (Even then the man displayed an interesting relationship with the facts.)

"The Celebrity Apprentice" hasn't aired since February 2015, and the television landscape has not been poorer for its absence. Plus, once Trump began calling Mexican immigrants criminals and rapists in late June of 2015 NBC cut its business ties with Trump — except, that is, for the hanging threads tying him to this show.

Now, some would-be "Celebrity Apprentice" viewers may be willing to hold their noses and take a peek anyway. What harm is there in watching the premiere? What, besides the bloviated tweets that will accompany even the most modest ratings victory? Not to mention the validation of advertiser support, thereby contributing to the wealth of a man already using his political office to make his family richer.

You or that "Apprentice" acolyte you know will be signing on to all of that as well as legitimizing the continued existence of a worn-out unscripted competition format, one featuring famous people you can find on the county fair circuit.

Among this cycle's contestants are Vince Neil and Jon Lovitz, Laila Ali and Boy George (who, as it turns out, does want to hurt me and make me cry), and Carson Kressley and Nicole "Snooki" Polizzi of “Jersey Shore” fame. A few of these people really are better than this show. Not Snooki, but some.

Then again, I would have said the same for a several of Schwarzenegger’s boardroom advisors. This time around includes celebrity chef Rocco DiSpirito, "The Biggest Loser" coach Bob Harper, and Tyra Banks, who rarely passes up an unscripted opportunity to promote herself. Hewing to the old boss’s tradition of nepotism, the Governator also has brought on his nephew, entertainment attorney Patrick Knapp Schwarzenegger, as a consultant.

Those folks, I’d expect. But Warren Buffett? The Oracle of Omaha? He's signed on to this cycle as well.

Et tu, Jessica Alba? Good lord, woman. You're the founder of The Honest Company. Regardless of that, she'll be there too.

Such a lineup may appeal to anyone whose critical faculties have been thoroughly holly-jollied out of them, understand. But do not give in! Not even to see what Arnold will say instead of “You’re fired.” ("You’re terminated" seems to be the most likely candidate. Anyway, please point out to your friend that it won’t kill them to read about it later, perhaps on an actual news site.)

If the person you’re attempting to steer away from the "Apprentice" swamp is dead set on drowning his brain cells in radioactive reality TV, note that ABC is premiering a new season of "The Bachelor." It stars a man named Nick Viall, a guy from Wisconsin who was rejected by two past “Bachelorettes.” He seems OK, and his quest to find love in a Southern California McMansion is competing against "The Celebrity Apprentice" in the same 8 p.m. time slot.

Want to see some actual prime time celebrities in action? Fox has Anthony Anderson teaming up with Gordon Ramsay on "MasterChef Celebrity Showdown," which has stars ranging from the low end of the spectrum (NeNe and Gregg Leakes) to the shinier end (Cheryl Hines, Kal Penn, former NFL stars Ronde and Tiki Barber). Ramsay can be a foul-mouthed volcano, but in his gentler moments he encourages creativity in children, is kind to home chefs, and doesn't brag about groping women.

"MasterChef Celebrity Showdown" also is suitable counter-programming to "The Celebrity Apprentice." It, too, begins at 8 p.m. Monday.

Should you meet with any resistance, pose this question: What is best in life? Because hearing the lamentations of the Snooki is not on any reasonable person's list.