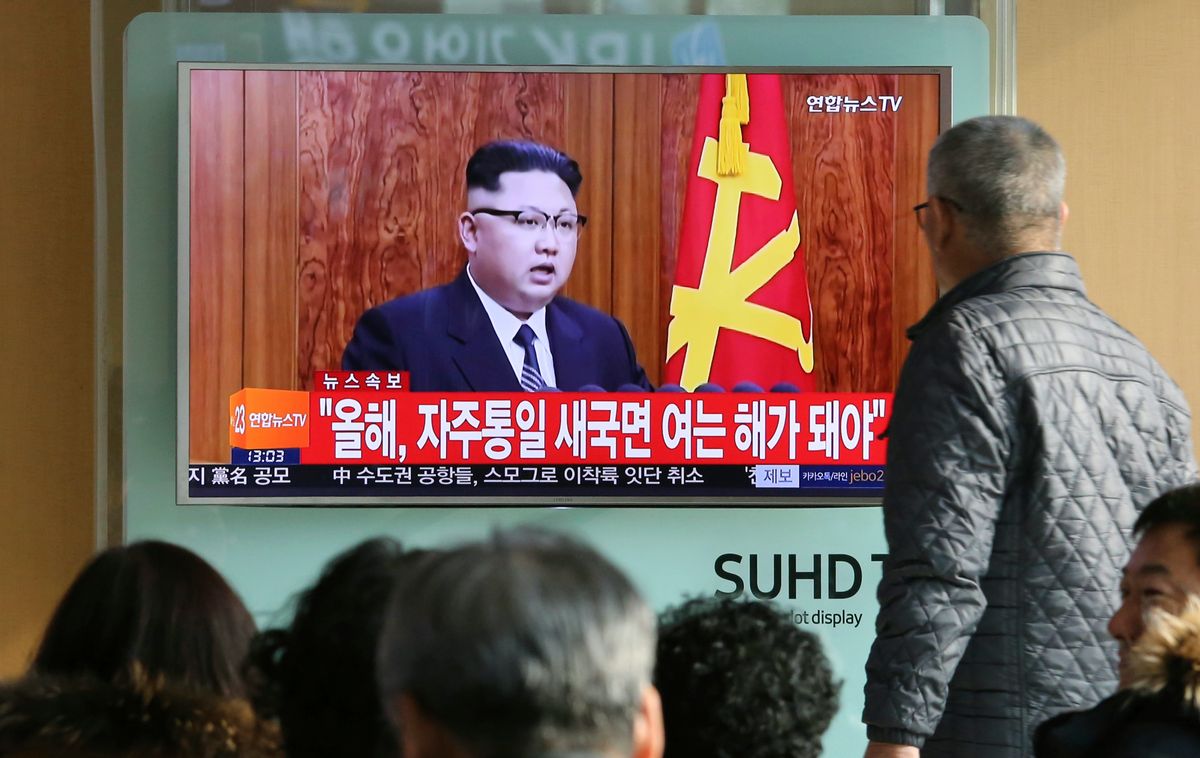 TOKYO — North Korean leader Kim Jong Un hinted Sunday that Pyongyang may ring in the new year with another bang — the test-launch of an intercontinental ballistic missile.

In his annual New Year's address, Kim said that after testing what the North claims was its first hydrogen bomb last year, preparations for launching an intercontinental ballistic missile have "reached the final stage"

Kim did not explicitly say an ICBM test, which if successful would be a big step forward for the North, was imminent. But he has a birthday coming up — on Jan. 8 — and last year Pyongyang conducted a nuclear test on Jan. 6.

Kim threatened in the address to boost his country's military capabilities further unless the U.S. ends war games with rival South Korea. But he also said efforts must be made to defuse the possibility of another Korean war and stressed the importance of building the economy under a five-year plan announced in May.

"The political and military position of socialism should be further cemented as an invincible fortress," Kim said, according to an outline of the speech carried by the North's official Korean Central News Agency. "We should resolutely smash the enemies' despicable and vicious moves to dampen the pure and ardent desire of the people for the party and estrange the people from it."

The address was shown on television mixing video with Kim speaking and stretches of audio only, as still photos were broadcast. It was less than 30 minutes long.

Under Kim, who rose to power following his father's death in 2011, North Korea has seen steady progress in its nuclear and missile programs, including two nuclear tests in 2016. It recently claimed a series of technical breakthroughs in its goal of developing a long-range nuclear missile capable of reaching the continental United States.

The year ahead could be a tumultuous one in north Asia, with Donald Trump set to become the new U.S. president on Jan. 20, and South Korea's politics in disarray over a scandal that brought the impeachment of President Park Geun-hye.

Kim indicated there will be no change in the North's nuclear policy unless Washington makes a big, conciliatory first move, which, even with the advent of Trump, would seem unlikely.

Trump has somewhat offhandedly suggested he would be willing to meet with Kim — but not in North Korea — and has at the same time indicated that he wants China to exert significantly more control over Pyongyang to get it to abandon its nuclear program.

Demands from Pyongyang for the U.S. to stop its joint military exercises with the South and enter into negotiations to sign a peace treaty formally ending the 1950-53 Korean War have fallen on deaf ears in Washington for years amid an atmosphere of distrust and deepening hostility.

Kim is in his early 30s and is now in his fifth year as the North's leader.

His New Year addresses, and a marathon speech at the May ruling party congress, are a contrast with his enigmatic father, Kim Jong Il, who rarely spoke in public. But he has yet to meet a foreign head of state or travel outside of North Korea since assuming power, and remains one the world's most mysterious national leaders.