The art mystery in the menu: The meal in this painting is more than just lunch — but what? 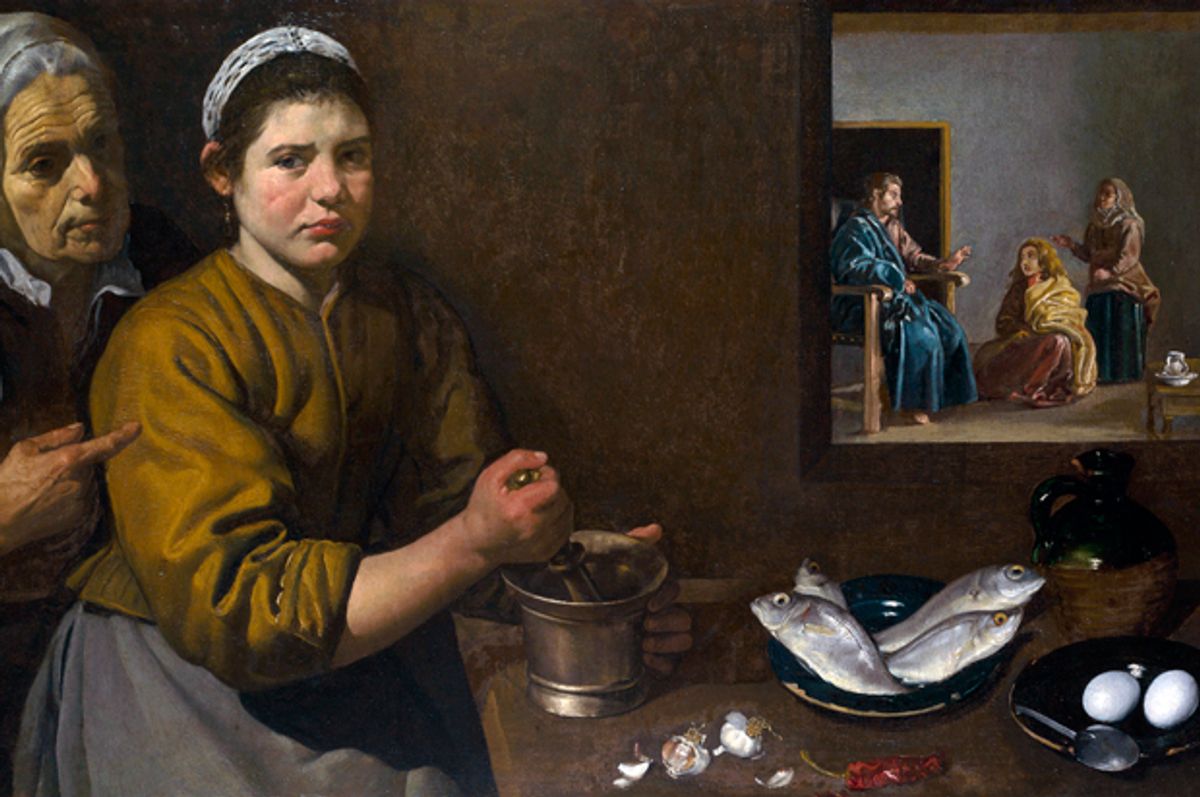 Now that art history has been saved as part of the UK national curriculum, it’s a good time to look at the union between food and art. It’s actually always a good time to look at this happy marriage, and today we’ll examine art that has food in it — specifically a painting by the greatest of Spanish Golden Age painters, Diego Velázquez, of food for which the edible components convey hidden messages.

I was first introduced to how food can provide its own visual riddle in art in the case of a painting by Velázquez, "Christ in the House of Mary and Martha." The painting is a multi-layered puzzle, but as an art history student, I was fascinated to attend a lecture in which I learned that a culinary historian (a subject I hadn’t known existed) had found the actual recipe that is being made by figures in the Velázquez painting.

This work, painted in 1618, is really about the visual puzzle it presents, but this is packaged in the guise of a religious painting. Velázquez was not known for religious paintings, but was a specialist in bodegones, genre scenes of everyday life that convey some moral message. This is a combination of the two subjects.

The biblical scene, from the Gospel of Luke, shows Christ visiting the house of Martha and her sister, Mary (the sisters of Lazarus, who Christ later resurrects). But while Martha prepares food and drink to offer Christ during the visit, as the good hostess, Mary merely sits at his feet. Martha complains to Christ about Mary’s behavior, and Christ says that Mary, in fact, is the one who acted more appropriately. This is the scene we get in the right-hand side of the painting, and it’s intentionally unclear as to whether this is a) a painting hanging in the home of the women preparing a meal, who Velázquez depicts on the left side of the painting, b) a mirror (in which case the women preparing the meal are in the presence of Christ, Mary and Martha, whose reflection we see), c) or a sort of snapshot of the imagination of the young woman preparing the meal — we see what she is thinking about, or even d) the women on the left are actually Mary and Martha, dressed in contemporary garb, and the figures with Christ on the right are a Biblical-era version meant to help us understand which scene we are viewing.

But what most art historians failed to pay attention to is the meal being prepared, and that’s where our interest is piqued. The women on the left side, in contemporary 17th century attire, are preparing a very specific dish. The older woman is instructing the younger one, who is lost in thought in the midst of crushing garlic with a copper mortar and pestle. The copper and their uniforms suggest that they are both servants in a reasonably wealthy household (peasants would not have a copper mortar and pestle, and their clothing is in good repair). Perhaps the older woman is chastising the younger one for being lazy, and the younger one recalls the story of Mary and Martha to rationalize her behavior? Velázquez did not write out an exegesis, so we must deduce. But maybe the dish being prepared offers a clue?

There are earlier versions of this same biblical scene that are equally odd, in that the scene is relegated deep to the background, with food as the main course, so to speak. Pieter Aertsen’s painting of the same title, from 1552, is a still life with a joint of meat, bread and a wedge of cheese — and if you squint, you can just see Christ with Mary and Martha in the far background. Food is featured, but the parable from the Bible is like a spice meant to flavor the focal food and allow it to convey a moral.

This is also found in another Velázquez painting, started in the same year, 1618, but finished in 1622: "Kitchen Maid with the Supper at Emmaus." This one shows a servant in the kitchen, paused listening or in thought, over a table covered with pots and jugs and a kerchief. It was only during a restoration in 1933 that the back left corner of the painting was cleaned and another scene revealed: Supper at Emmaus, a biblical scene in which Christ, in disguise, asks for shelter on his way to the town of Emmaus. He asks an old friend, who does not recognize him, but invites him to a meal all the same. It is only when Christ gives the blessing over the bread and wine before they eat that the friend recognizes who he is. While a meal is not in the midst of being served, we have the same moment: a maid in a kitchen, imagining or listening to a biblical scene related to food and hospitality. As in "Christ in the House of Martha and Mary," the biblical scene is relegated to a framed background area, still intentionally unclear as to whether it is a painting, a mirror, or a view into the mind of the servant girl.

Likewise, we might look at Velázquez’s bodegones paintings, several of which feature cooking (without a biblical reference), such as "Old Woman Frying Eggs" (1623), who incidentally appears to be the same old woman model used in "Christ in the House of Martha and Mary." She is in the midst of frying eggs in oil, when a young boy arrives carrying a loaf of bread and a melon. A recipe was found in a 17th-century Spanish cookbook that seems to show the very dish the old woman is cooking: sautéed onions, peppers and pimiento, topped with eggs fried in olive oil.

To solve all this, we turn to the ingredients on the table. Scholars have analyzed not only what we see to cook, but what we see that can be cooked with.

The juxtaposition is between the vita activa (temporal, active life) of Martha, of active devotion to religious contemplation, which is set against the vita contemplativa (thoughtful, spiritual life), embodied by Mary’s reaction to Christ’s visit, to just sit and think by his side. At the Council of Trent, the emergency meeting of the Catholic Church to figure out how to respond to the Reformation, one of the ideas to emerge was that the Lutheran idea that “faith alone” was adequate to be a spiritually fulfilled person (not obliging you to follow all the precepts of the Church, or even attending church with strict regularity) was not enough. One had to be proactive to commune with God. Velázquez, a Catholic working on this painting just a generation after the Council of Trent, would have had this firmly in mind.

The ingredients are to prepare a meal for Lent, a meatless one: fish, two eggs, garlic, peppers, a jug of oil. Just ingredients, you say? Perhaps not. Garlic was considered an aphrodisiac (despite the fact that it gives you bad breath). The fish and eggs are Christological symbols and oil is associated with religious rites. The mortar and pestle might symbolize copulation (especially when garlic is what is being mashed). The chili pepper is more complex, since it was a recent addition to European kitchens (indigenous to the New World) — in Italy it represented infidelity, but also luck. For Catholics, not eating meat during Lent is a strict rule — for Lutherans it is not. So this may be a poke at Lutherans, who preach leading too passive a life. However, that’s not the automatic solution, since if we recall the biblical story, Christ tells Martha that Mary’s passive approach was actually the correct one.

The art historical mystery remains. Scholars are divided as to what is the “correct” solution to the puzzle. It is certain that the foods presented here are about more than just lunch. But until a solution is found, why not cook them?