Can the news be saved?: 2017’s emerging media outlets face just as many challenges as old media

New media promised to best ever-failing traditional news, but there's so much wreckage on the landscape 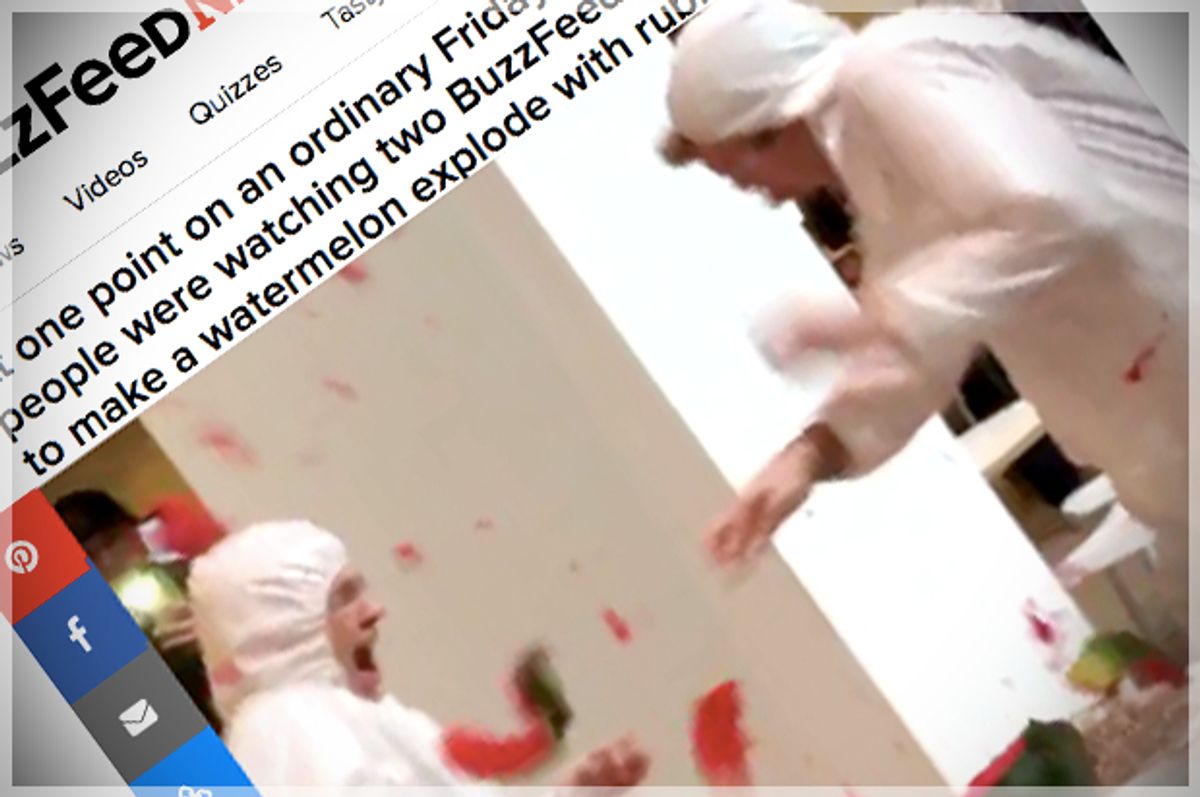 No year was more poignant in the slow death of 20th Century media institutions than 2016, but the process of journalistic reincarnation continues to be cursed by bad karma. Smart entrepreneurs have been trying in earnest to salvage this industry for a couple decades now, but it’s hard to argue that they’re succeeding. Despite myriad innovations, in 2016 Americans watched once-trusted broadcast networks bleed all over their living rooms alongside train wreck coverage of Donald Trump, then logged into Facebook and clicked their way into a meaningless online vortex led by nascent algorithm-dependent alternative news outlets. When folks were trying to practice good citizenship, the information they needed was more than fragmented or unreliable. It jeopardized our democracy and obfuscated our ability to take action.

It’s time for the elites in New York and Washington, the VCs and engineers in Silicon Valley, and the predominantly young white men launching 21st century news brands to do a gut check. They’d be well advised to fire their Growth Hackers and start prioritizing intellectual integrity over content farming. If they don’t, things will get much worse.

The bad news is this is highly unlikely to happen. The digital media ecosystem is completely rigged against ethical responsibility in ways that are potentially more destructive than the old media ecosystem. I make this assertion having had a front row seat to the transition: I started out as a reporter for The Chicago Tribune, worked as Arianna Huffington’s Chief of Staff in the early days of The Huffington Post, and eventually I was one of the first two curators of Upworthy. I know what it’s like inside crumbling media structures and the challenges of building new ones.

Let’s examine some of the reasons we’re completely screwed if we as news consumers don’t find a way to demonstrate wide-scale demand for more substantial and diverse content enterprises.

News operations are expensive and they don’t make money

The sites Millennials love are probably part of a giant bubble.

When my former boss left her namesake site earlier this year, much was made of the fact that the patron saint of new media enterprises, The Huffington Post, was never fantastically profitable. If the most ambitious, Pulitzer Prize-winning effort to challenge mainstream media failed to generate seriously big bucks for investors, what does it mean for all the competitor sites that followed in HuffPost’s footsteps? HuffPost had the advantage of predating Facebook’s control over the new media industry, and established itself the “old-fashioned” way with a great Google search engine strategy. This allowed them more freedom to innovate their product design and control their advertising model—a strategy next gen sites can’t incorporate as easily since they are dependent on social media for exposure.

Next Gen news brands employ many Millennial hipsters toting laptops in co-working spaces who may go the way of the pink-slipped print newspaper reporter if their founders can’t find a way to monetize amassing 10 million fans on an off-site platform.

Even as large as broadcast and print news conglomerates were at their peak, they don’t compare with the kind of control Facebook and other tech titans have over today’s news brands. There’s essentially no way to drive significant traffic to a standalone media outlet anymore, the way HuffPost did. You have to put the content directly on social media, which means you have to play by that social network’s rules. This means your product has to be designed entirely to the specifications that are optimal in that social environment, which we all know are fundamentally incongruous with depth, discernment, processing time, and follow up.

The result is that news-seekers get trapped in an endless loop of short, surface-level stories that dabble in depth but never coalesce in an actionable broader context. News consumers become overwhelmed by a barrage of quick-hitting content pieces — sometimes quite meaningful in nature — from brands such as Al Jazeera’s wildly popular AJ+ which currently boasts nearly 8 million Facebook followers and has consistently reached hundreds of millions of viewers for the last couple years.

This approach to news is proliferating and widely considered the new gold standard; there are, of course, other popular Facebook video pushers as well, such as NowThis News and HuffPost’s heir apparent, BuzzFeed. While SnapChat has challenged Facebook’s ubiquity in this space by featuring long-form videos from large legacy brands and some newbies, the entire emerging media is controlled by essentially one company that is forcing the outlets to prioritize short form video. Or whatever else it thinks people should consume in the future—a threat that could upend entire carefully-built enterprises in one swift feature upgrade or policy change.

That organization has a murky plan for fact-checking, and has no plan for addressing its notorious filter bubbles because its algorithm is even more up in our business than the Russian hackers. We know the Trump Administration isn’t going to be keen on antitrust laws, so the likelihood of this scenario changing is negligible. Agnostic distribution outlets like Facebook don’t prioritize intellectual integrity and fairness like news outlets of the past at least purported to do; they care about user engagement and attention minutes spent on their platform. Building out the news business of the future at their behest is essentially as totalitarian as it gets.

The hyper-emphasis on video has eroded depth

In old media, the news we saw on broadcast outlets was usually originally reported by print journalists. Newspapers had dozens and hundreds of skilled people monitoring beats and stories regularly who got in the weeds and knew what was at stake in the broader social context. Broadcasters sifted through the wonkiness and dumbed it down for a visual audience, often in tandem with print journalists when they were owned by the same media conglomerate. In 2016, both old and new media reached the apex of oversimplification. There’s ample evidence that cognition is improved through visual communication, but sifting through ad hoc social media links at the volume they are currently made available to viewers creates a cognitive dissonance. Meanwhile, the amazing dorky print people who did all of the really hard work to make sure the important stuff didn’t get missed got fired from their jobs and had to become college professors or consultants to commercial brands. They went from at least trying to be objective truth-tellers to content marketers trying to sell us stuff. Ack.

The highest quality Millennial news outlets were founded by activists

There are some really great Millennial-run news brands out there braving the social media matrix to deliver serious socio-political content to mass-scale audiences. Upworthy was one of the first, as well as former Washington Post star Ezra Klein’s Vox, followed by sites like Mic and Attn. These are predominantly liberal in point-of-view. On the conservative front there’s The Federalist. These outlets are investing in the tried-and-true techniques of substantial reporting and discourse. Among them, Vox distinctly does an amazing job of providing context to trending news stories. These sites are quickly emerging as the voices of the Millennial elites, comparable to the role that news magazines like The Atlantic and The Economist have played in legacy media equations. How much power do these sites have yet? If you measure them by their ability to impact the 2016 election, not much. They’re still niche and aspirational in comparison to the mainstream media’s stranglehold on the Baby Boomer narrative that controls politics in NYC and DC. If you want sanity and a way forward, you should be reading them. However, they were all founded by folks who have a slant on the issues and rarely engage constructively with competing philosophical approaches.

If you look at who is running a lot of the outlets I’ve mentioned, you’ll find that the entrepreneurs are super white and super male. One notable exception is Jose Antonio Vargas, the famously undocumented Pulitzer Prize-winning founder of EmergingUS, which is an outlet that reports from the perspective of a more diverse viewpoint. Jose shined a light on the lack of diversity in traditional media earlier this year with the  #journalismsowhite hashtag, noting how the racial composition of the country’s loudest voices skews our perception of truth and reality in America. There are certainly outlets that function as Jet and Ebony and Latina did in the legacy media, but today’s Very Smart Bros and Madame Noire and News Taco aren’t being pumped with venture capital and amassing millions of social media followers.

The Knight Foundation and Pro Publicas of the world are fighting the good fight, but they’ve got more in common with struggling documentary filmmakers now than the days when investigative journalism graced the front pages of powerful daily papers. There are Internet cats with more loyal supporters.

It’s pretty depressing looking at this infrastructure as we head into what might be one of the most volatile and tumultuous periods in American history. The only way through it will be to name the problem, call out the actors reinforcing these constructs, and push for changes at the funding, content creation, and distribution levels. Ex-journalists also have an opportunity to bring principles of disciplined storytelling into the booming content marketing industry, where authenticity — the new code word for truth — could be an edge for brands looking to stand out. If enough of us resist the algorithm and don’t take the clickbait, maybe the user experience designers who build technology platforms that extort our emotional weaknesses will realize they can cater to our strengths instead.