Do not go gentle into 2017: How to pay meaningful tribute to the idols you lost in 2016

We lost major creative talents in 2016. Honor them by setting goals for your own creative work this year 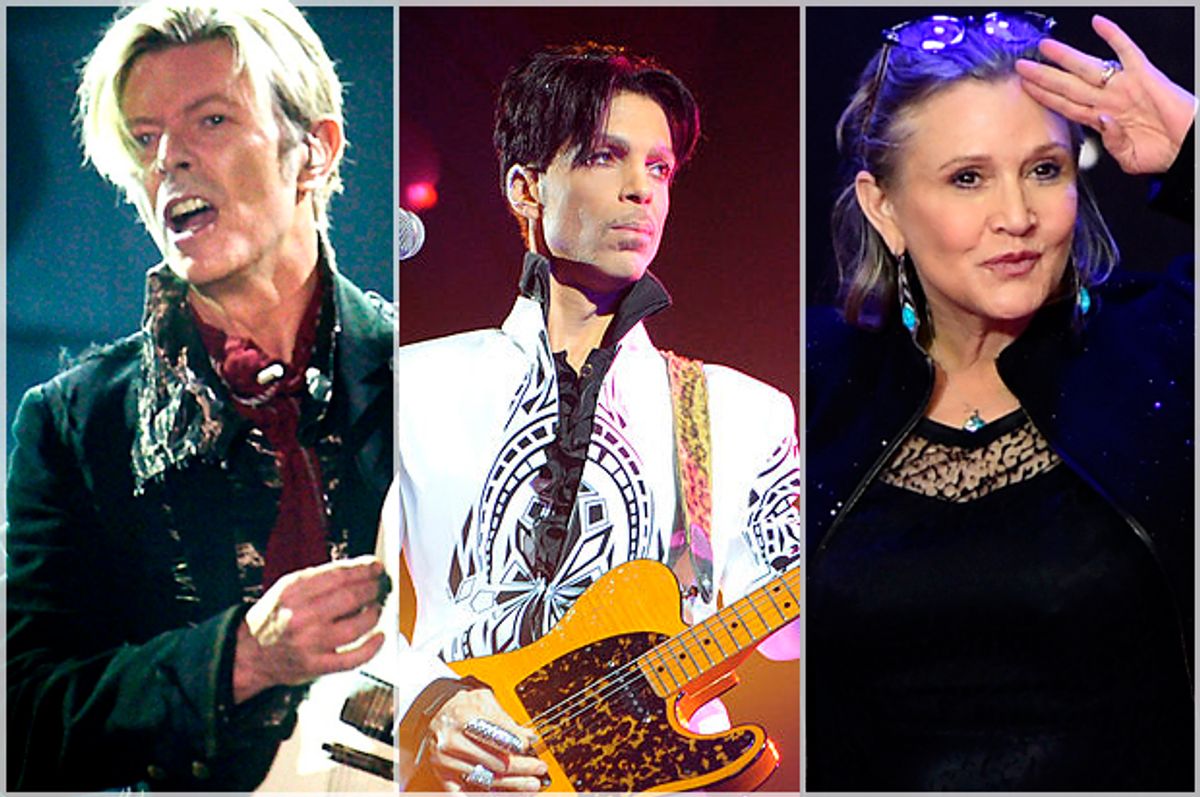 I was only 9 when actor John Candy died in March of 1994, but his death stands out in my mind. Mostly, I remember how my mother wept — and then bought the latest People magazine with his sweet, welcoming face on the cover. I’d never seen an adult affected by the death of a celebrity, and I was so shaken that I took the magazine into our unfinished basement, where I could read in private. That event must have taught me something about the power of art and empathy. A few months later, in May of 1994, when Jacqueline Kennedy Onassis died, I wrote my first poem outside of school — an ode to the former first lady, with whom I’d recently become fascinated.

Recently, someone told me “pets are meant to die.” This person argued that pets had a purpose, namely to help children understand death. The more I’ve thought about this, though, the more this statement seems short-sighted. Most of us will find encounters with death all too easily. Our parents and siblings and friends and schoolmates will die. Literature teaches us how to handle these tragedies; faith, too, can be instructive.

But the deaths of artists and celebrities can be uniquely tricky to negotiate. We might experience guilt for expending tears on people whose lives couldn’t have been further from our own. We might wonder at our ability to look past some questionable expressions of character. We might even catch ourselves grieving more for these people than our own family members.

This year, with the loss of icons such as David Bowie, Prince, Leonard Cohen and Carrie Fisher, many of us are confronting the breadth and complications of our feelings for people we’ve never immediately known. Mourning fans take to social media by the droves; they postulate about the raucous musical gatherings that must be happening in the fleecy white; they re-listen to old albums and newly purchase posthumous releases; they scroll through articles (like this one) that namedrop their beloveds, hungry for points of contact.

Yet with slideshows and summative articles stirring up our collective grief as 2016 comes to a close and 2017 dawns, avoiding the barrage of sentimentality is nearly impossible. And somehow, looking at pictures or watching clips or binge-reading articles (yes, like this one) just doesn’t seem enough. That’s why, this year, our resolutions need to be rethought.

We know that the all-or-nothing pledges a whopping 40 percent of Americans make (and 8 percent succeed at keeping) are part of what contributes to resolution fatigue. Who wouldn’t be skeptical about goal-setting if the outcome (failure) was intrinsic to the process?

Most people who have met with a middle school guidance counselor know that goals should be concrete and measurable. Maybe that’s why the New Year standbys — lose weight, exercise more — remain such well-polished chestnuts. In a recent interview with The Huffington Post, Dr. Roberta Anding, a nutrition professor at Baylor College of Medicine, advised resolution-makers: “When setting goals for a new year, make them health-related. This is your most important 401K: investing in your body and your sense of well-being.”

But if the most popular resolutions are health-related, what’s keeping people from success? Why do we keep making the same resolutions, year after year?

I believe that the “sense of well-being” that Anding talks about is more complicated than eating a plant-based diet or running a 5K with ease.

Humanist psychologists would likely agree. After all, at the top of Abraham Maslow’s Hierarchy of Needs is the state of self-actualization, a level of fulfillment marked by creative activity in keeping with ones essence. As Maslow wrote: “A musician must make music, an artist must paint, a poet must write, if he is to be ultimately at peace with himself.”

But Maslow’s ideas about self-actualization do not pertain only to artists. In his 1964 book "Religions, Values, and Peak Experiences," Maslow described peak experiences as “moments of highest happiness and fulfillment.” These fleeting states of euphoria can be experienced by anyone — in fact, I can’t imagine there weren’t any number of us in the throes of a peak experience at the only David Bowie concert I attended, in 2004, when the musician encouraged the audience to participate in a mass sing-along.

When our lives are so touched by the art and music and words of others, perhaps we owe it to ourselves to interrogate our own commitment to a creative practice. Deciding to spend 30 minutes a day writing might not lead to the same results as spending 30 minutes a day in the yoga studio, but the challenge of the blank page or the unfamiliar instrument might help us achieve new heights of self-actualization. To study an artistic tradition or develop a practice is to forge a bridge between yourself and the artists who have meant so much to you, a meaningful tribute that can help you feel less powerless when your idols die.

The word resolution comes from the Latin resolutio, from resolvere: “loosen, release.” As 2017 begins, perhaps now is the time to consider releasing ourselves from the narrow-minded, prescriptive resolutions of years past. Yes, you should stop smoking (Dad, that’s you). Yes, we should eat more vegetables (really, everyone). But those changes prevent us from releasing ourselves from the lives to which we’ve become accustomed. Creative resolutions, on the other hand, give us the power to truly reconceive of ourselves and commune with those people we’ve most admired.