It’s 2017. Can we finally have a real conversation about race?

Memo to white people: If you're still this uncomfortable talking about race, you're not helping 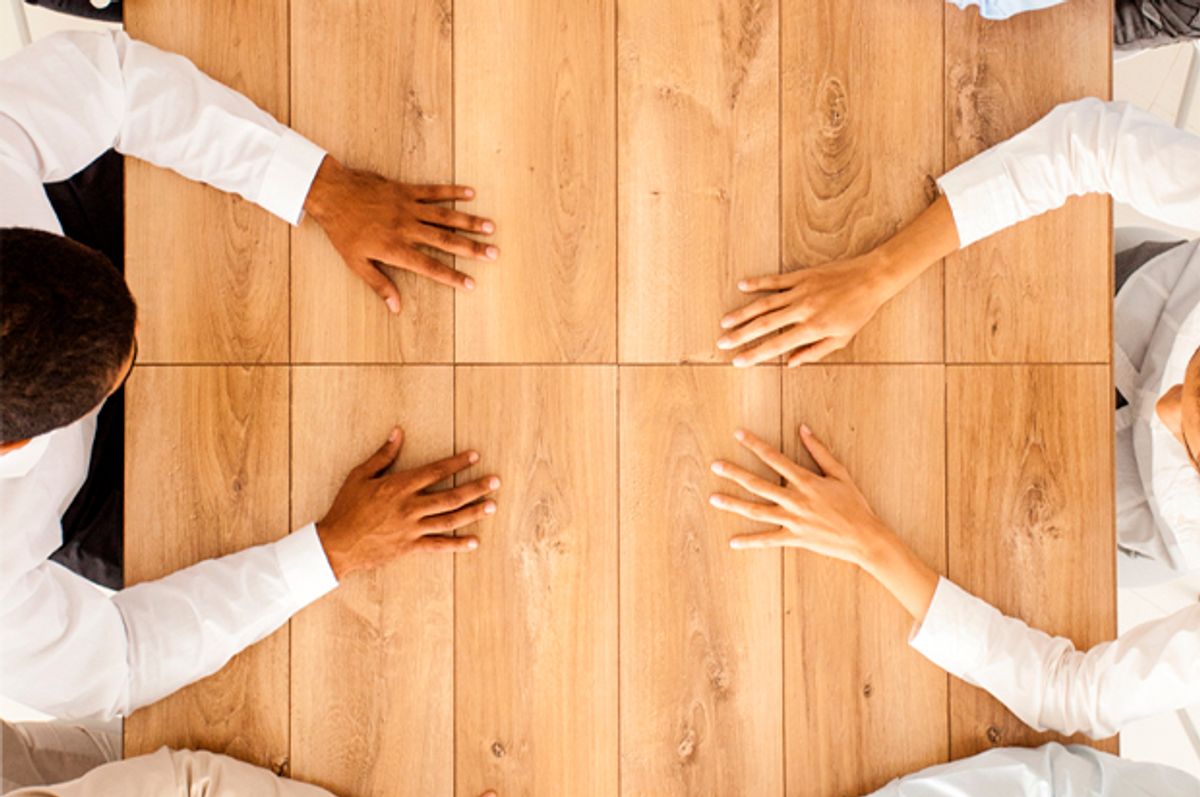 “It’s 2016, so why can’t we have a real conversation about race?” This is a question I have asked myself often over the last year. It frequently finds its way into my social settings, uninvited but still dominating, like that pebble in your running sneaker.

“Can I start you off with a drink?” asked the bartender in a near-empty restaurant across from the campus where I teach. I was celebrating the end of the semester. I had just marked a zillion papers and entered final grades — some As, a lot of Bs, a couple Cs and even three Fs.

“A glass of champagne? Vodka mixed with champagne, anything champagne?” I replied.

The guy next to me laughed, dropping his book on to the floor. I reached down, picked it up and handed it to him.

“Thank you," he said. "I love your drinking choices. You’re my kind of guy!”

He was white and thin and wore thick-framed glasses. Dude looked like a coach or an Old Navy model, all fleeced and boot-cut.

We then had a random exchange about Baltimore sports, Baltimore holidays and Baltimore politics — all laughs, a black guy and a white guy both irritated by the same B.S. Dr. King’s dream was in full effect.

A former student of mine from another college I taught at over a year ago named Mia walked in with a few friends. They sat on the three empty stools directly to the right of us.

“Professor Watkins!” Mia yelled. “Your next drink is on us — even though you gave me a B+. You know you could’ve gave me an A!”

“He a professor?” one of Mia's friends said. “He looks like a student, right?”

The white guy, who happened to be the only white guy at the bar besides the bartender, nudged me.

“That’s a real honor," the white guy said. "I can’t believe you are a professor, man. Wow, congrats.”

I wasn’t sure why he couldn’t believe it, or why Mia’s friend was so shocked, either, but I didn’t really want to press the issue. I had just graded two zillion papers and wanted to enjoy my champagne-gentrified-cocktail.

“Watkins!” Mia said. “You ever been to the Belvedere? They got two really nice bars over there.”

“The Belvedere is racist!” I laughed. “I stopped going in there after I saw how they did Mos Def in that HBO flick."

The movie I referenced was "Something the Lord Made," a biopic about a black doctor who preformed revolutionary work at Johns Hopkins Hospital but went most of his career without receiving recognition, and even had to work as a server at the Belvedere while practicing medicine. In one scene, he was denied entrance into a Belvedere event that all of his colleagues had been invited to and was forced use the service entrance.

“So was that in 1940 or 2016? I don’t understand why you are calling the place racist. Racism is over,” the white guy said, slamming down his cup. He started to raise his voice, but then he caught himself.

“I was joking, man," I said. "I honestly don’t care about that place. And mentioning the racist legacy of a place is legal, right?”

Mia chimed in, talking about her graduate school experiences and some of the issues she had been facing dealing with race. As an older guy with more experience in these issues, I tried to give her some insight, to share a few words of encouragement and some of my own coping mechanisms.

“Hey, my man, you disagree?” said Mia’s friend to the white guy. “He keep shaking his head at everything Mr. Watkins is saying.”

“Relax!” Mia said, hugging her friend. He pulled away.

“Nah, he shaking his neck like he having a seizure or something. I wanna know why!”

“I just feel like people talk about race too much, and I asked him a question about the Belvedere,” the white guy said, pointing at me. “And he just blew me off! Ha! Like what is that about?”

“Lesson one,” I said. “Even though I answered your question, I really don’t owe you an explanation. See, I’m too busy being oppressed to explain oppression to you.”

“Nope, no worries, I’m just going to mind my business and pay my bill,” said the white guy.

The two students said, “But you put yourself in the conversation!” We all laughed. The white guy hung around for another 15 minutes in silence and left.

“I didn’t want that guy to leave," said Mia's friend. "I really want to know how he felt about race.”

“I don’t think he really wanted to talk about race," I said. "Because in my opinion, he’s a racist and doesn’t even know it.”

This is common. There are a number of racist types floating around, like the I’m Not a Racist racists. Think of the guy who says “I’m not racist” every time he justifies mass incarceration and police murders. He doesn’t identify as a racist because he talks to black people in public places, loves professional sports like the NBA and NFL, which are dominated by black athletes, and is totally okay with black people until they bring up race or question his privilege. And then we have the I Don’t Know That I’m a Racist racists. This is the guy who doesn’t think he’s a racist because he masturbates to Beyoncé -- but jumps across the street so he won't have to walk past a group of black people. He looks at the black guy in his office with a raised eyebrow every time he misplaces his own wallet. Both of these guys are different from but just as dangerous as the Proud Racist racist (think: the Confederate flag made into a t-shirt guy shaking his ass a Donald Trump rally).

I see these guys all the time. They start race conversations and then ask questions that they don’t really want the answers to, or they already have the answers and want to waste your time. No statistic or study or hard evidence can shift their stance; they are knee-deep in tradition and strangled by their own perspective. I’m not against anyone who wants to spend their time enlightening people who aren’t intellectually curious, but just consider that it’s hard making racists acknowledge their own racism in a system where racism is okay.