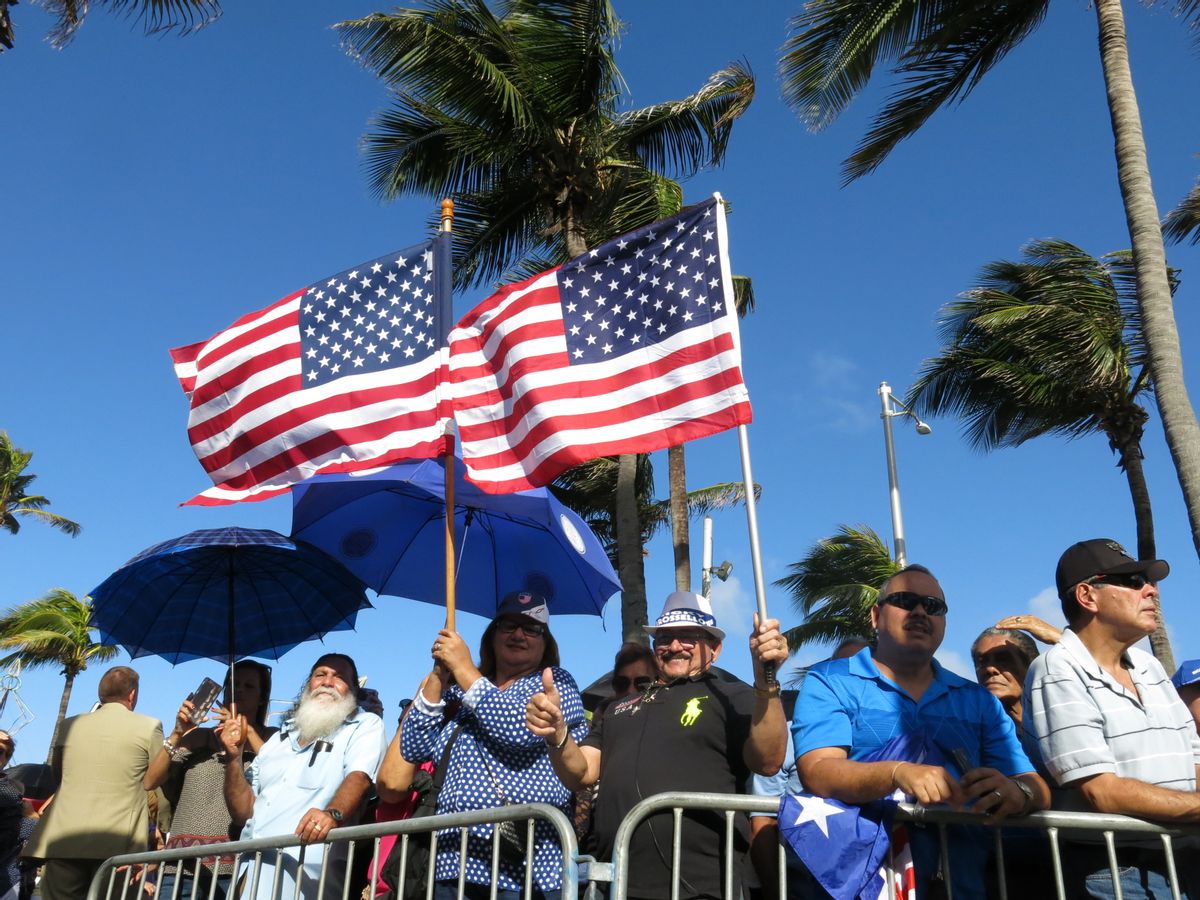 Pro-statehood supporters await the arrival of Puerto Rico's new governor at the seaside Capitol in San Juan, Puerto Rico, Monday, Jan. 2, 2017. Ricardo Rossello was sworn in Monday as the U.S. territory prepares for what many believe will be new austerity measures and a renewed push for statehood to haul the island out of a deep economic crisis. (AP Photo/Danica Coto) (AP)
--

SAN JUAN, Puerto Rico (AP) — Puerto Rico's new governor was sworn in Monday as the U.S. territory prepares for what many believe will be new austerity measures and a renewed push for statehood to haul the island out of a deep economic crisis.

Gov. Ricardo Rossello, 37, proposed several measures aimed at alleviating the crisis shortly after he was sworn in at midnight. Among them is a proposal to hold a referendum that would ask voters whether they prefer statehood or independence. Many have argued that Puerto Rico's political status has contributed to its decade-long crisis that has prompted more than 200,000 people to flee to the U.S. mainland in recent years.

Rossello also aims to boost public-private partnerships and use that revenue to save a retirement system that faces a $40 billion deficit and is expected to collapse in less than a year. Rossello also has pledged to work closely with a federal control board that U.S. Congress created last year to oversee Puerto Rico's finances, and he has said he supports negotiations with creditors to help restructure a nearly $70 billion public debt.

Thousands of supporters awaited Rossello's arrival for the post-swearing-in inauguration ceremony at the island's seaside Capitol building, clutching umbrellas to protect themselves from a searing sun.

Puerto Ricans have been hit with dozens of new taxes in the past four years and increases in utility bills as former Gov. Alejandro Garcia Padilla aimed to generate more revenue for a government he said was running out of money. Despite those and other measures, the island's government has defaulted on millions of dollars' worth of bond payments and declared a state of emergency at several agencies.

The federal control board has requested a revised fiscal plan that has to be approved by end of January, saying that the one Garcia submitted last year was in part unrealistic and relied too heavily on federal funds. Garcia had refused to submit a revised plan to include austerity measures. Rossello has said he would request an extension of that deadline as well as an extension of a moratorium that expires in February and currently protects Puerto Rico from lawsuits filed by angered creditors.

The new governor also seeks to privatize services such as the generation of energy, establish an office to oversee and distribute federal funds to cut down on corruption, and to create financial incentives for doctors to boost the number of dwindling specialists.

As supporters kept streaming toward the Capitol building, one yelled out, "Today, a new Puerto Rico begins!" to the cheers of others, including those holding U.S. flags.