At first, the idea of owning property seemed creepy, against our political values and staggeringly out of reach 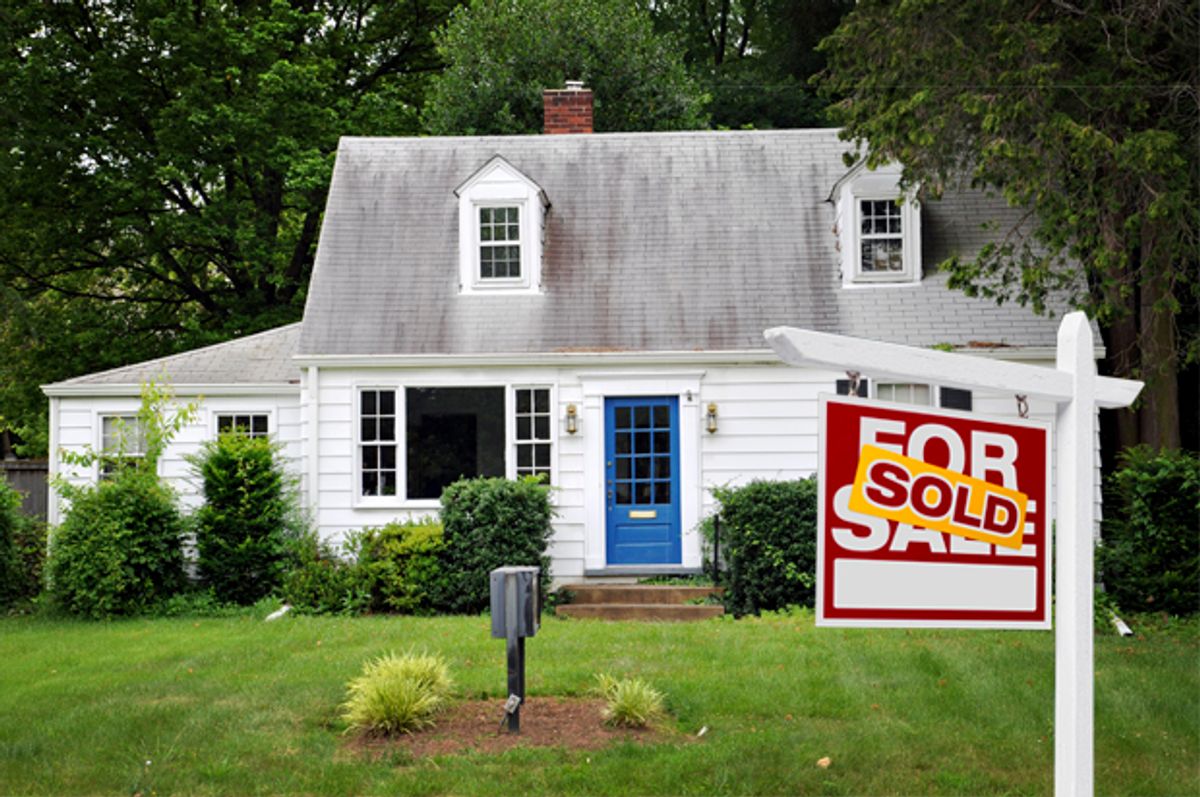 I can’t remember now when my girlfriend and I first started thinking about buying a house. It was almost certainly after we started renting one — a one and a half bedroom, one bathroom place in a rundown part of Atlanta, the city where we then lived. For the five years or so previous we had rented apartments, and it had not occurred to us seriously to do anything else. The idea of owning property seemed creepy, self-contained, and staggeringly out of reach.

But we loved our little house. It had a front porch and back yard, washer and dryer, and its long narrow “shotgun” layout meant that we could speak at opposite ends without being heard. This was unprecedented, and it held a strange appeal.

Strange because for the past several years we had been trying to live according to values that dictated the sacrifice of material comfort in exchange for collective well-being. I had worked as a labor organizer and caregiver for people with disabilities and as a restaurant worker before going back to school to study literature and creative writing. My girlfriend had worked her own litany of odd and more conventional jobs before completing her master’s degree in racial and social difference. The little money we made we spent on rent, furniture and food that had not been mass-produced. Our apartments were filled with books and films and visual art made by our friends. Our ideology was imprecise, but the underlying feeling was clear: We had been born into a world that was bad and getting worse (income inequality! white supremacy! global warming!). We had an obligation to improve it in the best ways we knew how.

Or at least that was the story that we told ourselves at the time—the way that we narrated the decisions we made. As with all stories, it contained elements of truth, and, as with all stories, it was incomplete. Both of us had grown up privileged—perhaps less so than some but certainly more so than most. All four of our parents had gone to college, and all four worked in the so-called “professional” fields; we had both gone to college without incurring a single dollar of debt; and while we had recently descended to the economic margins, our decline was mitigated by a feeling that we could always go back—back to decent health insurance, back to discretionary income, back to the comforts of the middle class.

And then there was the issue of money itself. I went to college without taking out loans because of the gift of a wealthy great-grandmother; that gift, which had taken the form of investments, did quite well. While I meandered through my twenties, locked in my pseudo-bohemian stance, the remnants of that money rumbled along. I hardly touched it, believing it to be tainted, stained. It was the product of a system of economics in which I did not believe, and I wanted no part. I suppose I could have donated it, or otherwise given it away. Instead, I buried it, pretended that it did not exist.

But, of course, it had existed, whether I wanted to admit it to myself or not. And now we were getting older—no longer in our mid-twenties, no longer in our late. I was contributing the slight graduate stipend I made to the salary my girlfriend was bringing in from her arts and social justice job. When money grew tight, I supplemented our earnings with funds from the account—two hundred dollars one month, five hundred the next. We decided we needed a car so we bought one. Not a fancy car, mind you—a fifteen-year old Civic with 170,000 miles on it—but a car nonetheless. That money had to come from somewhere.

These were not the first times I touched the money but they now seem the most important. For years, I had been trying to come to terms with the pleasantly liberal values that surrounded my formative years. Those values asserted, without quite being spoken, that it was best to live and let live, individual fulfillment was paramount, and one should give back some of one received. My own beliefs were more collectivist, and my protestations, which at first had been mostly performative, took up residence where personal identity lives.

Now with each small transfer, each dip back into the money system in which I did not believe, I saw that part of my identity shuddering, quavering, threatening to collapse. I saw my radicalism fading—or that it could fade, easily enough, depending on the decisions I made. But I also saw how the money helped us, how it kept other anxieties at bay.

Shortly after we moved into the rental house in Atlanta, someone broke a window while we were out and stole a few of our things. Since we had acquired renter’s insurance upon signing the lease, economically we suffered no harm.

Afterwards, though, we were shaken. Part of the concern was physical; what if the thieves came back? We told ourselves that we would rather have our things stolen than take up arms against another; installing an alarm system, on the other hand, meant entering into an agreement with law enforcement, yet another institution we abhorred.

But a second part of the discomfort was ideological. To what extent were we really collectivists? I wondered. If someone had knocked on the door and asked for our things, would we have given them to him? What if he wanted to sleep on our couch?

We would live in the Atlanta house for another eighteen months and experience no trouble again. We made friends with our neighbors, who were voluble and working-class and seemed to know all the local thieves. We had artists over to smoke cigarettes on the porch and drink beers and jabber about ways to improve the world. We read novels and critical theory, studied and worked, and tried to make poems and photographs and love. For the first time in our lives together, we had enough space that the other person wasn’t constantly crowding in. We had no desire to go back.

After I finished graduate school, we were faced with a decision. Should we stay in Atlanta, where we had lived for more than two years, or move back to Seattle, where we were born and raised? Atlanta had more social inequality and stratification and thus greater need. But Seattle had better schools, more generous social services, and more socialists. Plus, our families were there.

After my girlfriend applied for a job at a non-profit, she promptly received an offer. When we looked for apartments online, we found that our hometown had become prohibitively expensive in the years since we left. On a visit home, we looked at charmless one-bedroom apartments that cost more than our entire Atlanta house; houses went for nearly twice as much. We tried not to despair.

Then we had an idea. Why not look to buy? We could use what was left of my college fund for the down payment; the mortgage would probably be less than rent. At the same time we would be “gaining equity,” paying into an asset that we now owned.

We secured a realtor through family, an energetic former social worker who was only too happy to help a young couple in need. With him, we scoured Redfin and Zillow and Multiple Listing Service, learned about escalation clauses and federal housing loans, and visited dilapidated houses that were listed for just less than the amount that the bank had concluded that we could afford. We submitted offers on three houses over three months. Each time we watched as our competitors drove their prices sky-high.

Then it happened: our fourth bid went through. The house was even smaller than our rental in Atlanta, but it had plenty of room for books and furniture and the visual art made by our friends. More than a little stunned, we signed that paperwork and made preparations to move in.

Through the unpacking of possessions from storage and consolidating of items from our parents’ houses and acquiring of new, inexpensive furniture, I could not shake a feeling of unease. I understood that the made economic sense. But was it not this sense, precisely—the logic of acquisition and appreciation, of self-enclosure and greed—that we had spent all of these years trying to resist?

It has been six months since we moved in and our lives are essentially the same. My partner works for an arts organization serving people recovering from homelessness, trauma, and addiction; I teach composition at a community college, where I try to encourage my students to think seriously about their lives.

Still, my uneasiness persists. It is not a question of guilt, I do not think, although guilt must enter the equation: I have friends burdened with college debt and mired in low- or middle-income jobs who may never own their own home.

It is not a question of looming financial commitment, either. Long ago, I became reconciled to the notion that one has to live somewhere. And somewhere always costs.

No, I think it has more to do with the transfers and the robbery and the decision to move home. It has to do with the feeling that, in the struggle between safety and faithfulness to our political ideals, we chose safety, that in the struggle between self-care and caring for others we chose ourselves. And that the repercussions of that decision will reverberate for longer and farther than we now know.

Alex Gallo-Brown is a writer living in Seattle