Collateral damage on the Homefront: We must hold George W. Bush accountable for his crimes as Trump takes power

Trump is a terror, but we can't forget the politicians who allowed his rise 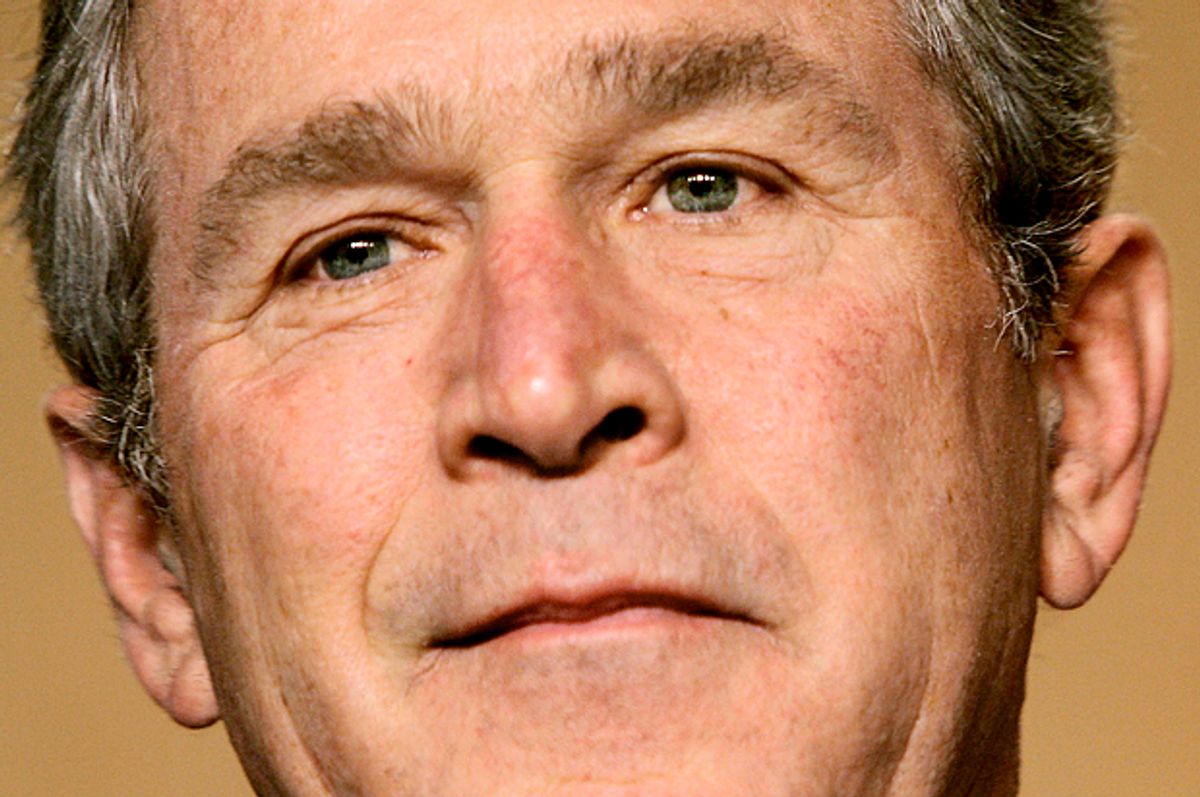 While much of the country was trying to figure out how Donald Trump had become president-elect, CodePink was convening an event with the potential to change the culture that created a Trump-sized hole in the White House. Because really, how could he not have been elected? In an increasingly careless, narcissistic, no-accountability nation, the electoral slide to this crass man who has never been held accountable for his lies, his bottom-feeder language, his lack of ethics and his potentially illegal business dealings was virtually inevitable. We lowered the political bar to the point where even Trump could clear it when we allowed Bush, Cheney & Co. to instigate an illegal war in Iraq.

We don’t get do-overs, but we can do differently, and we started with the People’s Tribunal on Iraq. Hundreds of experts, analysts, journalists, researchers, veterans, military family members, Iraqis and civilians testified about the lies that led to that war and the horrific price that has been paid. Two days of testimony took place at the University of the District of Columbia’s Moot Court on Dec. 1-2. But this was no exercise in futility. I have lost far too much for that. I am advancing the case for a class-action lawsuit against the architects of a war based on lies, using some of the testimony from the Tribunal, including mine.

When my husband, a veteran of the Iraq war, strangled me to the point of unconsciousness, I thought I was the only one. I was not. A 2006 study found that over 80 percent of veterans with post-traumatic stress disorder had committed at least one act of violence in the previous year; nearly half of those committed a severe act such as shooting, stabbing or strangulation. A 2010 Army Report noted a 177-percent increase in the number of soldiers who had committed spousal or child abuse in the previous six years.

When my friend Kristy Huddleston was murdered by her Operation Iraqi Freedom veteran husband, who shot her and left her bleeding out on the kitchen floor while their 10-year-old son called 911, I thought she was the only one. She was not. According to the Pentagon, cases of child neglect, abuse, sexual assault and murder in military families increased by 40 percent from 2009 to 2012. There have been many months when the casualty rate of military family members killed on the American Homefront has far exceeded the casualty rate of American service members killed on the Iraq war front. A lot of those casualties were children.

Military kids in North Carolina (home to Fort Bragg and Camp LeJeune) are twice as likely to die of severe abuse as civilian kids, according to the North Carolina Child Advocacy Institute. The number of military children killed by their parents has more than doubled since 2001.

When 12-year-old Daniel Radenz hanged himself during his father’s second tour in Iraq, I thought he must be the only one. He was not. Studies of California secondary school students revealed that nearly 18 percent of military kids had attempted suicide, more than double that of civilian youth. By 2014, an estimated 1.5 million (a third of) military kids had developed a mental health issue after the deployment of a parent or sibling. For the first time in U.S. history, there were more military kids struggling with the behavioral consequences of war than warriors themselves.

Genetics are a key factor in the heritability of mental illness and susceptibility to addiction. In a random survey of adult children of combat vets with PTSD, more than 80 percent of those kids demonstrated hyper-vigilance, 65 percent began using alcohol during childhood and over half reported drug use. A report published by the Australian Institute for Health & Welfare (2000) revealed that suicide rates of children of male Vietnam veterans, most of whom served a single tour, are triple that of civilian youth. Time will tell if multiple tours raise that rate even higher in the children of Iraq war veterans.

If this nation’s moral compass has retained any magnetism whatsoever, the biological collateral damage of combat in the family members of veterans should point it toward ending endless wars. Accumulating evidence shows that America has sentenced the caregivers, children and grandchildren of today’s wounded warriors to sadder, sicker, shorter lives.

After several years of caring for my 80-percent disabled Iraq vet, I was getting sicker and sicker, fighting one infection after another. When I was hospitalized with a cellulitis infection so dangerous doctors asked for my advance directive, I thought I was the only one. I was not. When my caregiver friends kept getting diagnosed with cancer, or anxiety symptoms so severe that they resembled a heart attack, I thought they were the only ones. They were not. Studies link chronic stress, caregiving and PTSD to significantly shortened life spans in both the veteran and the spouse. Research by Nobel Laureate Elizabeth Blackburn found that female caregivers with very high stress levels have severely compromised immune systems and cellular damage (shortening of the telomeres) equivalent to a decade of additional aging. I used to say the Iraq war was aging military families in dog years. I meant it as a joke. Turns out I was right. It’s not so funny now.

Two years ago, I had a husband, a home on some land that felt like heaven to me and a small herd of companion animals that were my surrogate children. I had a job helping my husband and other veterans; I had a really good credit rating and a combined household income of nearly $100,000. I had a life.

About a year ago, my now ex-husband was back on crystal meth and threatening me with an M4 before trying to commit suicide-by-cop. I had fled my home in terror, sacrificing everything I ever loved in this world just to stay alive. While I was wandering, lost on the streets of southern Oregon, my identity was stolen by a crystal meth drug user my husband got high with. She destroyed my credit rating, costing me thousands of dollars. In less than 90 days, I was robbed of my home, husband, job, companion animals, health care, social and economic status, and finally my identity, too. It was as though I didn’t even exist.

I am the collateral damage of America’s war in Iraq. I don’t know if there will be justice for me. But there is a case for a class action on behalf of the families of Iraq war veterans. Earlier this year, Congress overrode the presidential veto of the Justice Against Sponsors of Terrorism Act, clearing families and survivors of the 9/11 attacks to sue governments for failing to prevent terrorism. I believe that provides the legal framework for me and hundreds of thousands of other families of Iraq war veterans to sue the United States government, members of Congress and the State Department for failing to prevent George W. Bush from committing a sustained act of terrorism that illegally required our loved ones to serve in Iraq, where they were injured or died.

Furthermore, because of the government’s affirmative actions in causing the Iraq war, which was an arbitrary war that resulted in the death or injury of Iraq war veterans, the families of those veterans have been denied their constitutional rights to life, liberty and property. Iraq was a war of choice, not necessity, and government officials knew that and went to war regardless. In doing so they violated the 5th and 14th Amendments of the United States Constitution containing due process clauses asserting that the administration of justice should act as a safeguard from arbitrary denial of life, liberty or property by the government outside the sanction of law.

I have sustained major material and emotional damages and losses, including loss of property, loss of identity, loss of income, loss of marital consortium, physical injury and other damages. I am not the only one. That is why I support CodePink's call for a Commission on Truth and Accountability on the Iraq war on behalf of the families of veterans who have a Freedom Medal now where their soldier used to be. That is why I am advancing a class action on behalf of the families of veterans who were wounded or died for a lie. But America’s got skin in this lawsuit too. Because when we create a culture that refuses to tolerate illegal, immoral behavior from presidents who sentence others to suffer for their lies, we won’t elect presidents who behave that way.